It is by gathering some passionate musicians that already have a significative musical experience that the Bad Wolves project is born.

Tommy Vext (vocals, Vext, ex-Divine Heresy, ex-Westfield Massacre, ex-Snot) and Doc Coyle (guitar, ex-God Forbid) decided to team up with John Boecklin (drums, ex-DevilDriver), Chris Cain (guitar, ex-Bury Your Dead, ex-For the Fallen Dreams) and Kyle Konkiel (bass, Vimic, ex-In This Moment) to compose a modern album full of energy. The band is propelled due to their manager’s (Zoltan Bathory from Five Finger Death Punch) excellent promotion and an emotional cover of a track from The Cramberries, which was planned as a duo with Dolores O’Riordan that will never see the light because of her sudden death. Disobey, their first record composed of thirteen motivating tracks, is just released, and I’m sure that you will love it. 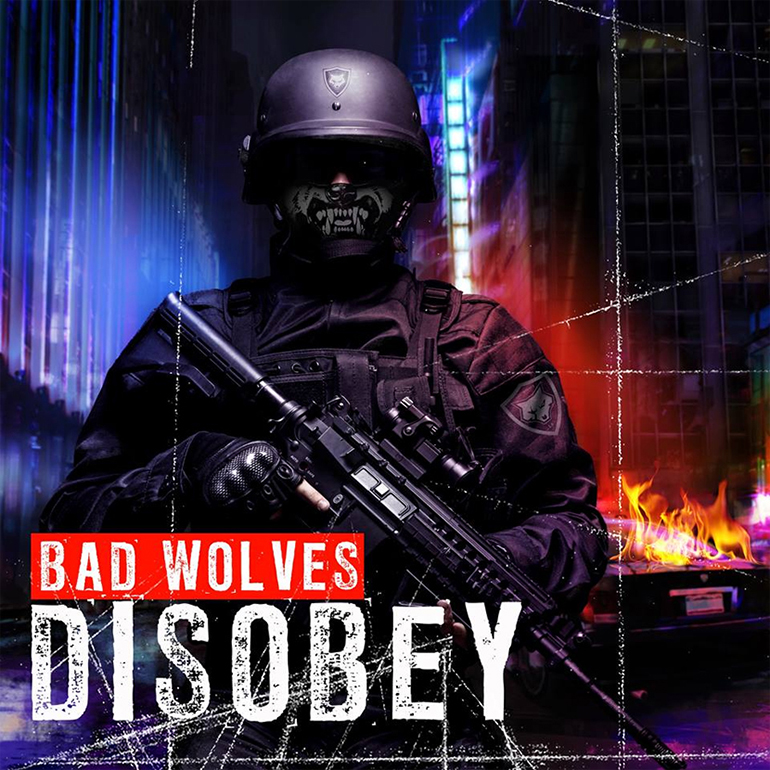 The band begin with Officer Down, a song that melts dissonant guitar with a Djent-oriented hatched rhythmic filled with harmonics, and some near from atmospheric moments that reminds some Progressive Metal, while Tommy Vext screams or let us hear his flawless clean voice. Jerky rhythm continues on Learn To Live, the first track ever released. With a flow that would be the envy of many rappers, the singer leads us on an astonishingly violent break, before letting us feel the bass’ strength while both guitars create a disturbing ambience. While the two firsts tracks highly remind me Divine Heresy’s first record, on which Tommy sings, No Masters really reveals the band’s own sound, halfway between a powerful rhythmic and a quieter but catchy chorus, thanks to the singer’s voice.
The next track is no other than Zombie, cover from The Cranberries that is already online since some months. Whereas  the original song is quite emotional, almost haunting and melancholic, the powerful instrumental part played by the musicians combined to Tommy’s vocals made it a true song that deserves to be heard by everyone. Run For Your Life inverts the usual process that the band created by offering a fast and violent chorus while verses are less aggressive, but Remember When made me think about some RnB stuff due to the phrasing supported by the guys’ Metalcore riffs. Did the record is too quiet for you? That’s a good point, because after Better The Devil’s Progressive rhythmic comes a chorus that will wake you up and gives an unstoppable will of headbanging to death. Once again, the very fast phrasing is highly impactful and screams just strengthens this pure power feeling.
The musicians decided to make Jesus Saves a more technical track than the others, but they also keep the chaotic and massive aspect that defines their sound, and this song might be the perfect reason to start a mosh pit at their shows. Maybe you already know this one, but Hear Me Now is also part of the record. Revealed as a duo with Diamante, it’s a different version that Bad Wolves recorded for the album, with only Tommy Vext on vocals. Saturated and jerky sound comes back on Truth Or Dare, and even if technicity is a great part of the whole song, it’s absolutely not like a display of power that the americans realised here, but a real composition.
Kinda in the same pattern, but with a catchiest atmosphere and that explodes at the stress peak, The Conversation pushes the musicians to use some screaming choirs to reach their goal. However, I’m a bit disappointed by the final break, but Shape Shifter was easily able to capture my attention again with its worked riffs. While choruses are a bit more powerful, verses are nearly hypnotizing. Toast To The Ghost, the last song, is also the longest one. Nearly focusing on dissonant riffs even on heavy parts, the low tuning allows musicians to make the chorus burst into fire, under a significant dose of blast beat and double drum kick. The final part will probably surprise you.

Bad Wolves’ main strength is its diversity. Each musician’s musical past contributes to Disobey, and the least that we can say if that the final blend is astonishing! If the band recently hits the stage for their firsts shows in the United States, it would be hard to not think that 2019 will be the year of their firsts shows in Europe!