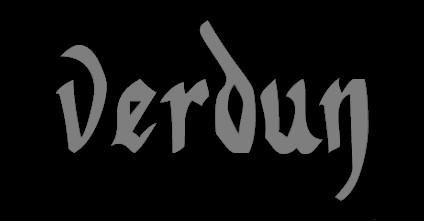 Verdun. An evocative name for a french band.

Created in 2010 in Montpellier, the band gathers nowadays Géraud Jonquet (drums), Florian Celdran (bass, ex-Fleshdoll), Jérôme Pinelli (guitar, Doctor Livingstone) and David Sadok (vocals/keyboards) to close the saga they started at their first EP from 2012. The end of this journey is marked by Astral Sabbath, their second album. 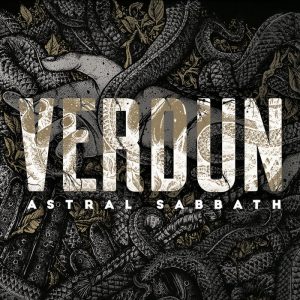 Let’s start with Return of the Space Martyr, a track that smells a greasy Sludge since the first riff. That’s obviously what comes over us after a short intro. Heavy riffs dominated by a snoring bass sound and piercing howls. As always, tracks are slow and last long, but they’re also mesmerizing. After a soaring break, the rhythm part comes back to knock us out before Darkness Has Called My Name. With psychedelic accents, the band ram us into a hole of darkness, from which it is impossible to not move our head. Drum hits perfectly frame this saturation wave that gets a bit more peaceful with worrying harmonics before surging again. ?????????? (“interlude” in russian) is a short instrumental track that once again slows the pattern with dissonant sounds to throw us on Venom (S). The band develops melancholic sounds on a rhythm part, which is sometimes airy, sometimes way heavier. Suddenly, tempo increases and fury seizes the band, whose groove is still catchy.
With a soft introduction, The Second Sun brings more soaring sounds to a lumbering rhythm part, but also vocals a bit less saturated. Those nearly Stoner influences are pleasant, but it’s once again a dirty and weeping Doom that the french guys discharge on L’Enfant Nouveau. Harmonics are still here, and highlight screams in french. Riffs are less gloomy than on the previous tracks, but the singer’s lasts chants are both bitter cold and mystic. Last song, A?stra?l Sa?bba?th reconnects with a trampling sound and persisting riffs. But the ambience changes again, as it becomes more intense, relentlessly smashing again. That’s after a new fix of violence that the lasts harmonics fade away in the air.

With Astral Sabbath, Verdun concludes the cycle that created their sound. Their riffs quality is impressive, and even if they’re not really known by the Metal audience, the band will make itself heard. To resume this album, it was war. And for once, it was good.