Emerging again from the icy finnish forest, Wolfheart comes back to introduce their fifth album, Wolves of Karelia.

Only two years since their previous record, this albums stays into the Melodic Death Metal the band perfectly control. At the head of the project, Tuomas Saukkonen (vocals/guitar, Dawn of Solace, ex-Before the Dawn, ex-Black Sun Aeon…), still accompanied by Lauri Silvonen (bass/choirs, Bloodred Hourglass) and Joonas Kauppinen (drums, Disease of the Nation, ex-Before the Dawn, ex-Misery Inc.). Unfortunately Mika Lammassaari (guitar, Mors Subita) prefered to leave the band in 2019. He was replaced by Vargelis Karzis (guitar, ex-Rotting Christ) on stage and finally took permanent duties after participating to the album’s recording. Announced for the 10th April 2020 on Napalm Records, please welcome Wolves of Karelia. 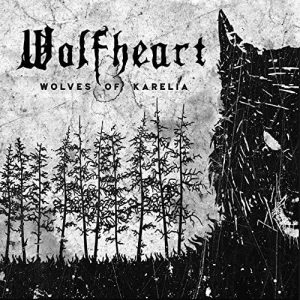 We begin this adventure with Hail of Steel. This The band’s peculiar ambience is here since the firsts notes, and the storm hits after a soaring introduction. Slashing harmonics and the singer’s rough voice are raging on an ice cold rhythmic. Rage explodes on the chorus with choirs, then the hurricane restarts. More quiet and atmospheric, Horizon on Fire develops this detail’s meticulousness that the band displays since the very beginning, with a clean-sounding guitar that brings the full band, and some parts also slip into massive riffs that reminds us this ambience during the whole track. More raw and aggressive, Reaper is the next one. Pure Melodic Death Metal with this violent melodic aspect that gives the track its taste, and that perfectly melts with the composition’s cold ambiences. We go back on subtle touches with The Hammer. Rhythm part is still unleashed and catchy, but the finns skillfully wedge  those beautiful airy parts that contributes to their strength, notably thanks to a clean guitar that calls for the end of the song.
Eye of The Storm, an instrumental track that calms the situation, mainly with this captivating and oppressing sound. The composition pass in a flash, and suddenly stops to let place to Born From Fire. The icy atmosphere that rages since the beginning of the record starts again and slowly progresses, thanks to as heavy as melodic riffs. Catchy, Arrows of Chaos combines once again an unbridled rhythmic, a rough voice and stunning arrangements that literally settle with riffs’ violence. Last song, Ashes stands out with its stabbing guitar that rule all over the song. This melancholic and mesmerizing sound, combined to the impressive and cold rhythmic marks an epic end.

Once again, Wolfheart’s mastery is frighteningly effective. Wolves of Karelia is a powerful, intense, bitter and insanely melodic album. It’s totally impossible to not be snatched by this gem, and the album will enter straight to this year’s top ten without leaving.

One thought on “Review 174: Wolfheart – Wolves of Karelia – English”