Melting similar universes is what Metal is mainly made of, and split releases are probably something that opened the way. In 2020, Cursed Be Thy Flesh (Black Metal), Willow Ash (Stoner/Doom) and Altar of Profanation (Black Metal) decided to join forces and release together The Dark Summoning. 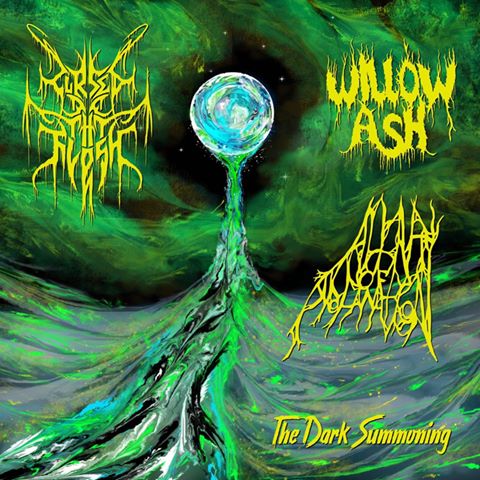 What is a split album main interest? Make one band’s audience discover the other one’s universe, we agree. And that’s precisely the case of the sound complementarity between the three bands. Cursed Be Thy Flesh’s dissonant and unhealthy Black Metal on The Dark Summoning is aggressive and slow but stabbing, just like Willow Ash’s Stoner/Doom for Tendrils Of Midnight. And this track also plays on mystical sonorities in the background, as well as some dark riffs. We find the ritualistic and tortured universe for Sacred Putridity as well as melancholy with Old School sounds for Gold Dust, two of Altar of Profanation’s compositions.

Joining their forces, Cursed Be Thy Flesh, Willow Ash and Altar of Profanation achieved to link their universes. Dissonant, dark, unhealthy and melancholic, The Dark Summoning’s compositions keep this common touch while developing their own sound.