Musical fury lovers, Stillbirth is back!

Founded in Germany in 1999 by Lukas Swiaczny (guitar/vocals, Placenta Powerfist), the band stopped until 2004 then revives in 2006 under the founder’s impulse. Some line-up changes and six full-lengths later, Lukas is now the band’s singer, and gathered by Dominik « Pumpa » König (bass/vocals), Martin Grupe (drums), Sims Stürmlinger (guitar), Jens Strack (guitar, Obsolete Incarnation) and Lukas Kaminski (bass, Placenta Powerfist) for the release of Revive The Throne, the band’s seventh album. 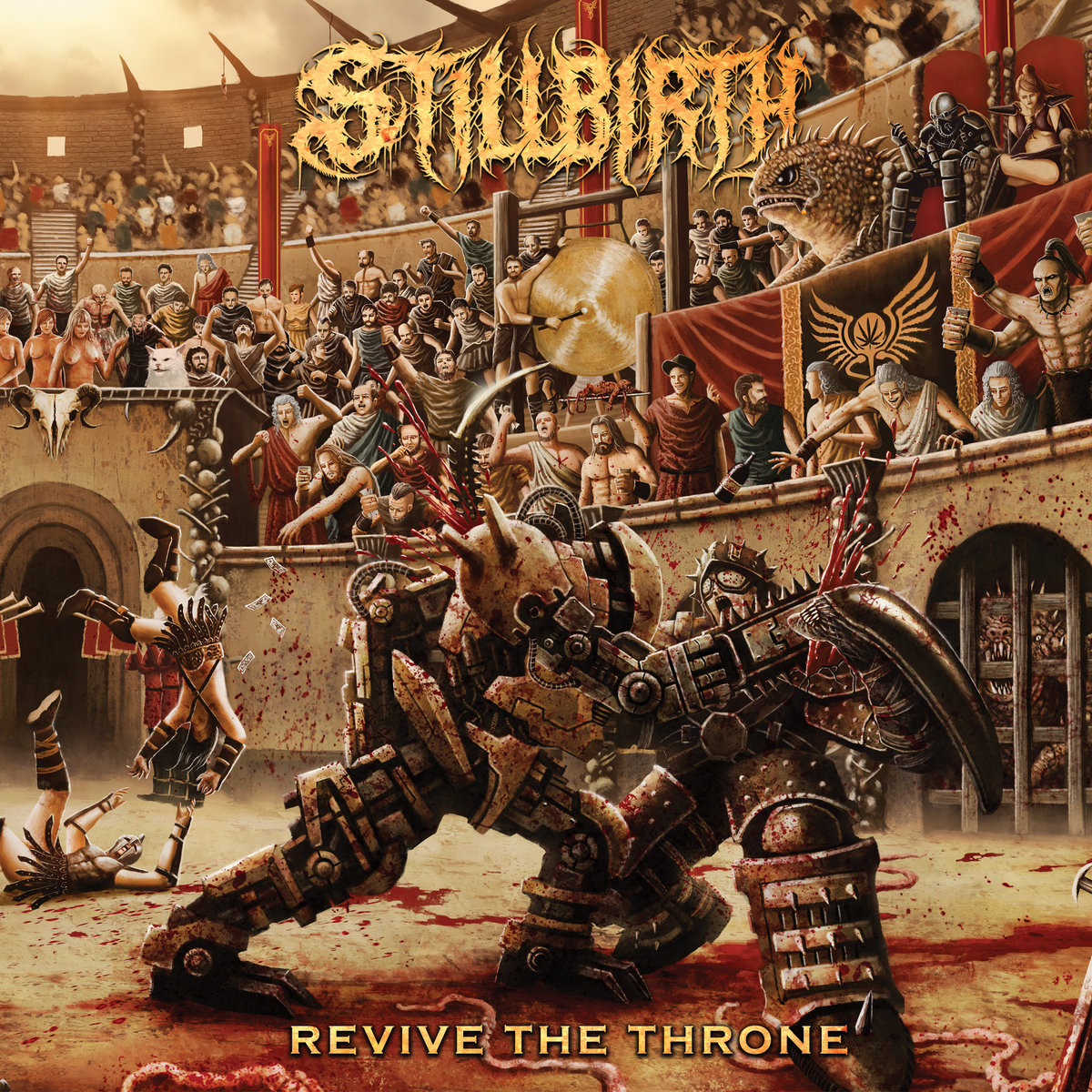 Evolving in a melting of Brutal Death, Grindcore and Slam Death, the band begins without a further ado with the introductive sample of Degraded to Mutilation, a short and catchy song that immediately gets us in the mood. Revive the Throne, the eponymous song, is the next one, and that’s between heavy and dancing rhythmic, bestial howlings and astonishing hits that the band play. Crushing everything on their path as always, the germans offer us some seconds to breath thanks to Degeneration’s sample before spreading again their super powerful riffs. Pig squeal, vicious screams and guttural howlings are on the bill, just like on Mans Tormentor, a martial song. Connecting fastness, rage and some hints of technicity, the band also include some really groovy parts. We stay on this warlike ambience for Panem et Circenses, a composition with impressive vocal parts, even for regular Death Metal fans.
Do you expect some respite? Too bad, because Breed of Bestiality comes back on the more greasy and heaviest parts the band ever composed during their career as well as some bassdrops to smash us a bit more. Eating the Flesh of the Objector seems to have the same goal, because aside from harmonics, this song is a real tank at full speed, just like Revolt of the Weak. A sample allow us several seconds to breath before unleashing the beast. Expect blast, bloody riffs and wild howls. Groove and technicity are Echoes of the Trumpets’ keywords, for a song which is vivid thanks to the Grind side, but also massive thanks to Brutal/Slam parts, and the mixing is very effective. We will also notice the drums important place for Unleash the Mutation, a song that also follows the band’s greasy and pattern as well as this nearly continuous double kick, and we already are about to listen to Dethrone the King. This is the album’s ultimate composition, and his only mission is to hammer one last time the band’s message with heavy riffs.

Without a doubt, Stillbirth is in good shape. Revive The Throne proves it many times, the band is coming back stronger than ever, and it’s possible that the bass players duo contribute to this new mammoth heaviness!

One thought on “Review 229: Stillbirth – Revive the Throne – English”