Well known by Death Metal enthusiasts, Undergang are back.

Founded in 2008, there are only two members from the former trio: D. Torturdød (guitar/vocals, Phrenelith, ex-Hyperdontia, ex-Realm of Chaos…) and A. Dødshjælp (drums, ex-Realm of Chaos). The band hires Mads Haarløv (guitar/back vocals, ex-Iniquity, live for Wormridden…), then Martin Leth Andersen (bass, Strychnos, Cerkloth…) to handle the vacant duties. Aldrig i livet, their fifth album, is out this year. 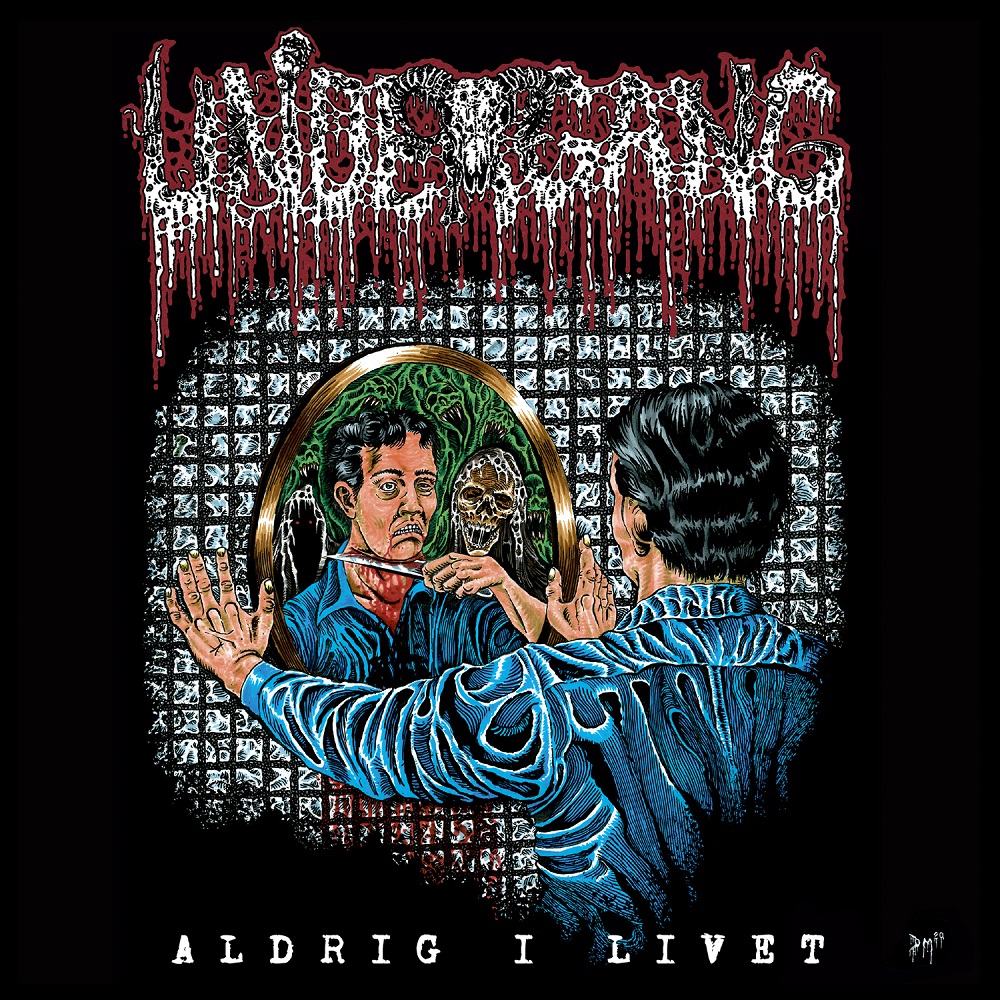 It is with Præfluidum, a worrying then suddenly heavy introduction that the album begins. The sound is greasy and dirty, but very impressive, and continues on one minute of pure violence named Spontan bakteriel. Piercing leads contrast with this thick and saturated basis, then we pick into frantic Grindcore with Indtørret lig. The rhythmic is catchy as hell, and we’re beaten by all sides. The band’s Old School Doom Death roots are really here with this oppressive and putrid sound, that however offers a worrying break before smashing us again. Menneskeæder is the next one, and the composition links again with those catchy but weighing patterns. This greasy wall of sound softly calms down for the introduction on Ufrivillig donation af vitale organer, then rhythmic accelerates again. Vocals, dubbed by some howlings, is still as impressive, but the addition of the second voice gives it an unhealthy side.
The band continues with Sygelige nydelser (Del 3) Emetofili and its howlings straight from the grave, to add this oppressive touch to dark and violent riffs. We stay on this frame made of tortured and disturbing rhythmic for Usømmelig omgang med lig. The band barely slows down to smash heavier and heady parts, and this break dominated by a worrying clean sound strengthens the idea of oppression, before coming back to powerful riffs. Aldrig i livet, the eponymous track, offers us an introduction that could have been part of a horror movie before getting crushed by massive but still quite melodic riffs. Except some gruntings, no vocals, but they’ll be back for the lumbering Rødt dødt kød. Rhythmic is slow and threatening, but an acceleration for the final part confirms the band’s will to fight. We end with Man binder ikke et dødt menneske, a song that melts sticky riffs with a great fix of catchy patterns to nail us a bit more.

No doubt, Undergang dominate what they do. Aldrig i livet is a greasy, effective, fat and powerful album that can only please to the style’s enthusiasts, and it will still be heard for a long time after its release!