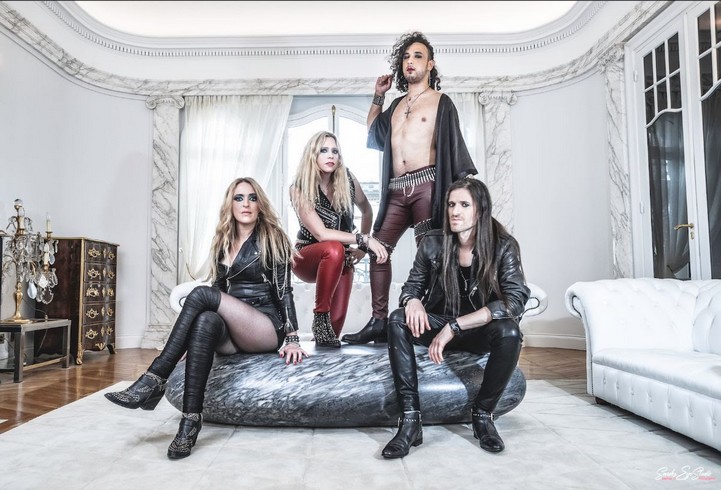 Zaza Bathory and Lynda Basstarde, Furies‘ rhythm section, answered my questions for the release of Fortune’s Gate, their first album.

Hello and thank you for your time! Could you please introduce the band and yourself please? Why did you choose this name?
Zaza Bathory (drums): Hello and thanks to you for taking time for us! Furies is a Heavy Metal band from Paris, two men on guitars (symmetrical because Billy Lazer is left-handed and Sam Flash is right-handed) and two women on the rhythmic section, bass/vocals for Lynda Basstarde and drums for me, Zaza Bathory.
When we had to find a name for the band, I thought of something feminine and I recently saw Walter Hill’s movie “The Warriors” of which the villain’s gang is called The Baseball Furies, with Kiss-looking makeup… I loved this movie because there is a melting of comics visuals, it’s really great and it happens between New York gangs. Furies also had this mythological aspect, they are vengeful goddesses… this name is rich about sense, it can be said in French and English, it’s short, effective, and we can do anything with it!

Fortune’s Gate, Furies’ first album, is about to be released, how do you feel in the band? Can you tell me a bit more about the album’s composition?
Zaza: Yeah, the album will be released in some weeks and we’re over excited. We are eager to know how it will be welcomed and we hope that our fans will love it, but also that it will tickle some people that don’t already know us, and there are many for now! The album was composed in about 3 years: we all know each other, but when we come to a work aspect, we need everyone to take their marks. We had everything to create, and we tried a lot. Everybody is composing in the band, and Lynda writes lyrics, so we can suggest some nearly finished songs then everyone changes a bit, or guitarists bring riffs that we arrange in rehearsals. Arrangements are made by everyone, everybody suggests their ideas, then we talk about it, about transitions, thematics, backing vocals…

Even if the band was only made of women, in 2016 Sam Flash and Billy Laser, two guys, joined the band. Was it a big change for you?
Zaza: Of course it was a big change, but it was for the best! Moreover our sound really changed with a real direction, more Speed and epic from Billu, and I could finally assume my love for Thrash Metal thanks to Sam Flash. In my point of view, this was also a technical challenge because Billy has a tendency to increase tempo and this really passionates me to work my drums differently.

What are your main inspiration roots in the band? It can be musical or not.
Zaza: We all have a Heavy Metal background, some bands are loved by everyone inside of Furies, like Judas Priest, Iron Maiden, Megadeth… but for example Billy will also like some NeoClassical with Symphony X, Sam will be more Thrash focused with Exodus, Lynda loves Hard Rock like Black Sabbath, Led Zeppelin or I can be more Old School Thrash/Death with… Death or Sepultura.

In 2017, the band created a Heavy Metal version of Mourir Sur Scène, a song originally performed by the singer Dalida, why did you choose this one? Did this cover influence the new album?
Zaza: The story behind this cover is that we had the opportunity to record at the Labomatic Studio with Bénédicte Schmitt on the on the pulse of a cover compilation made by la Souterraine (a platform that supports francophone creation). We chose this absolutely offbeat song because personally I am a huge Dalida fan. I live ome of her songs but moreover the charismatic woman she was, her beauty, the drama, the melancholy and some breaches in the character. We all loved the lyrics, because we all see ourselves playing on stage until we die when we are artists…! And that while recording in the mythic Labomatic Studios that we established links with Bénédicte Schmitt and then we had the opportunity to record the album here.

About the artwork, we’re on something flashy, with comics/animation inspiration, can you explain a bit more? What is the link with the album?
Zaza : The illustrator of our artworks since the rape Unleash The Furies is Slo, who is a comic illustrator. He realised a lot of artworks, collaborates with Les Tambours du Bronx, and already worked with Billy’s last band. When we began to work with him in 2017, we wanted some flashy color for something attractive. We wanted to be pictured trapped in a cave for Unleash the Furies for the underground side that wants to be out of this cave, and he instantly understood and sublimates our idea. So we naturally called him when we wanted to be pictured out of the ground and on the ascent of the Eiffel Tower for the album! Once again, colors are very important for us, Metal isn’t just about black leather, even if we also like this a lot! But we also love to exploit other aspects outside of music and outside of Metal, that could enrich our music.

You decided to highlight the song Voodoo Chains with an animated clip, why did you pick this one and not another one?
Zaza: For us this song is the most accessible one from the record. It was a good introduction to educate most of the people and announce our full-length, because it’s finally Rock & Roll! It’s the song that can touch a wider audience than some other ones on the record, so we naturally chose this one.

While most of the songs are in english, the song Antidote is in french. Why did you choose French for this one?
Zaza: Lynda tried it on this one, and it worked really well? Most of the songs are in english because it’s easier to talk to metalheads from every country with this language. However we also love our culture and for Lynda who notably sang with Sortilège and listened to this band even before she know them, it was obvious. Inside of Furies, we all agree that it is possible that it will be at least one song in French on the next album…

Covid fucked up a lot of things this year, but you’re still releasing an album. How did you live containment as a band? What about you personally?
Zaza: As you know, it was really hard for everyone… As a band, we couldn’t do rehearsals anymore but at the moment we already worked on this release and on the Voodoo Chains video clip as well, but also on You & I video clip that was recorded the day before the containment. So Furies wasn’t on stand-by, it was more like a submarine work. What was hard to handle, is that we were supposed to play in Denmark, Sweden and Germany, and all was postponed. For me personally it was really hard because I couldn’t play drums at all, living in a flat and I was used to work in our rehearsal space between rehearsals… so I decided to relocate to play without annoying my neighbours and never live this again!

Except the album release, did you plan something for the end of the year? What about next year?
Zaza : Our shows as I said are postponed. We hope that they will happen next year, finger crossed. We are also supposed to play at some reckless festivals that are still up, so we expect that everything will be fine until the end!

Where does this interest for this Old School style which is Heavy Metal comes from? What was the very first Metal song you ever listened?
Zaza: The very first Metal song I listened, I remember it perfectly as I was so marked! It was Fight Fire with Fire from Metallica, and I was twelve years old. I immediately remember that I became fan of this band, then I discovered Megadeth, then Slayer and Sepultura, etc… then at high school, a friend gave me two tapes of Judas Priest and it was a REVELATION! I was born in the 80’s but I would have love to have 16 years old in 84 to be able to see those bands… as soon as I saw live videos, I regretted to not have seen this in the “real life”.
Lynda: Many years ago, as I walked into a flea market, I saw something shining on a display. There was many iron-pins and it was Vic Rattlehad where the emerald on his hand was shining, I bought it and I kept this pins as a relic without knowing what it was. Later, in a library, I see a cover with Iron Maiden’s Eddie with the very first clip I saw on a computer, and that was the turn on. For the first Metal song I listened, I don’t really remember, my brother listened to Extreme Metal but not Heavy, so it would have been a Black Metal band. 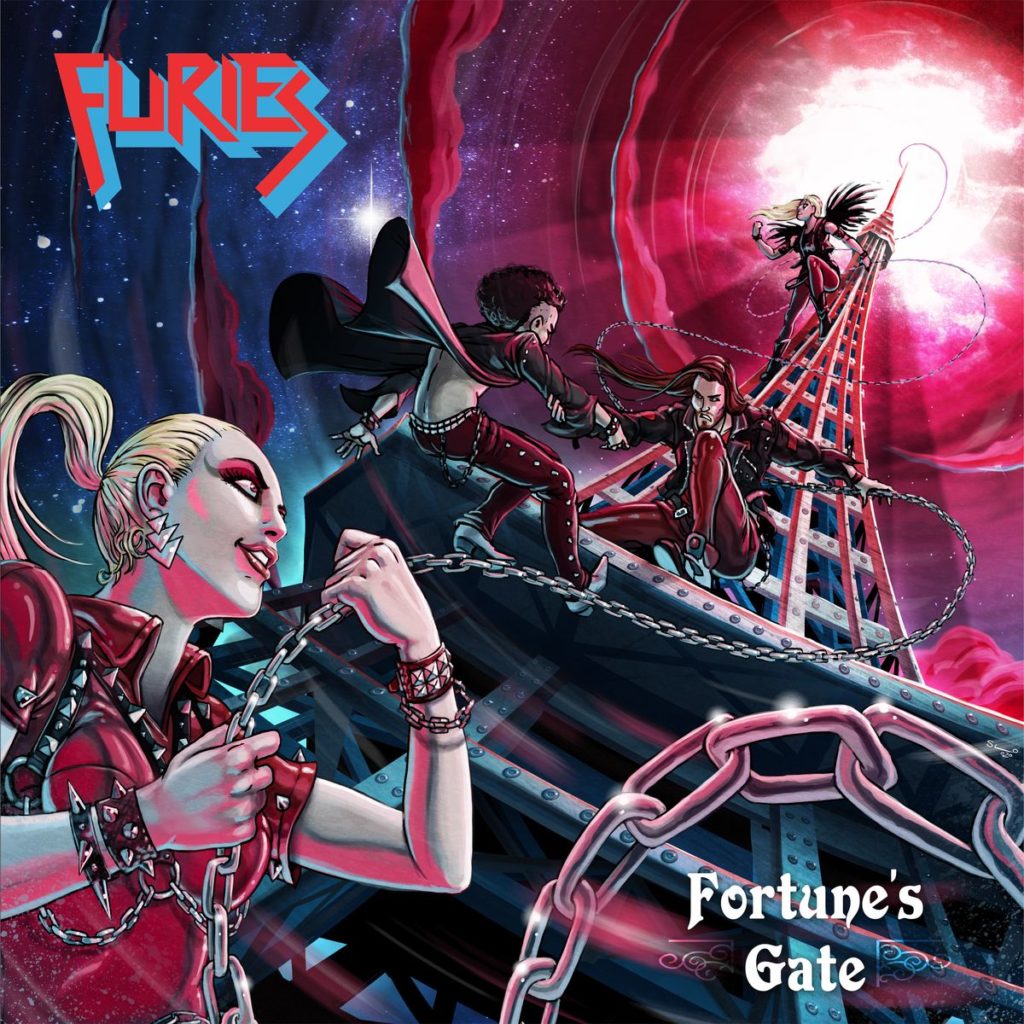 Do you remember the very first time you picked an instrument to play? When and how was it?
Zaza: I don’t remember it very well because my parent’s home was always full of many instruments: violons, violas, flutes, trumpets, mandolins.. My sister played transverse flute and I come from a music-passionated family. I have some blurry memories of me playing the old piano in the living room, I was like 4 years old… my very “first” instrument was the oboe, that I learned at the music academy with special lessons since my seventh birthday.
Lynda: Yes, it was a very small keyboard that we had at home, I had fun recreating and create melodies! Then a bit after, my mother had an acoustic guitar but I prefered at the time to buy an electric guitar, and I did some jams with friends, then I took bass because it was needed in my former band Hemoragy!

Could you tell us some words about the french Hard Rock/Heavy Metal scene in France?
Lynda: I think that in France there are more Extreme Metal bands than Hard/Heavy bands, however there are some Heavy bands like Existance and some re-bands like Blasphème or Sortilège. In the end, those bands are active so we don’t get bored with concerts!
Zaza: There’s a band that I love a lot, called Animalize! I bought their tape, they do a really cool stuff!

To which french dish could you compare Furies’ music?
Lynda: Haha! Strange question, but I like it a lot! I would say a huge pasta plate because it is solid as Heavy Metal, but also diversified because of many elements as vegetables for freshness and lightness, and many colors for complexity, a touch of extra virgin olive oil for the alchemy and so on!
Zaza: A very good ratatouille! In the TRUE ratatouille, each vegetable is cooked separately in olive oil, and it’s just in the end that we melt everything with spices, aromates. It’s beautiful, colored, each piece perfectly melt with the others while keeping its flavour and it smells as good as the sun, as we are, right? 😉

Last question: I let you create a tour with Furies as opener and three other bands!
Lynda: Let’s be crazy, Judas Priest, Iron Maiden and Ozzy Osbourne!

Thanks again for your time, the last words are yours!
Zaza: Thanks to you for your questions, and for the last word I would like to write You & I’s chorus: “All together union forever” <3