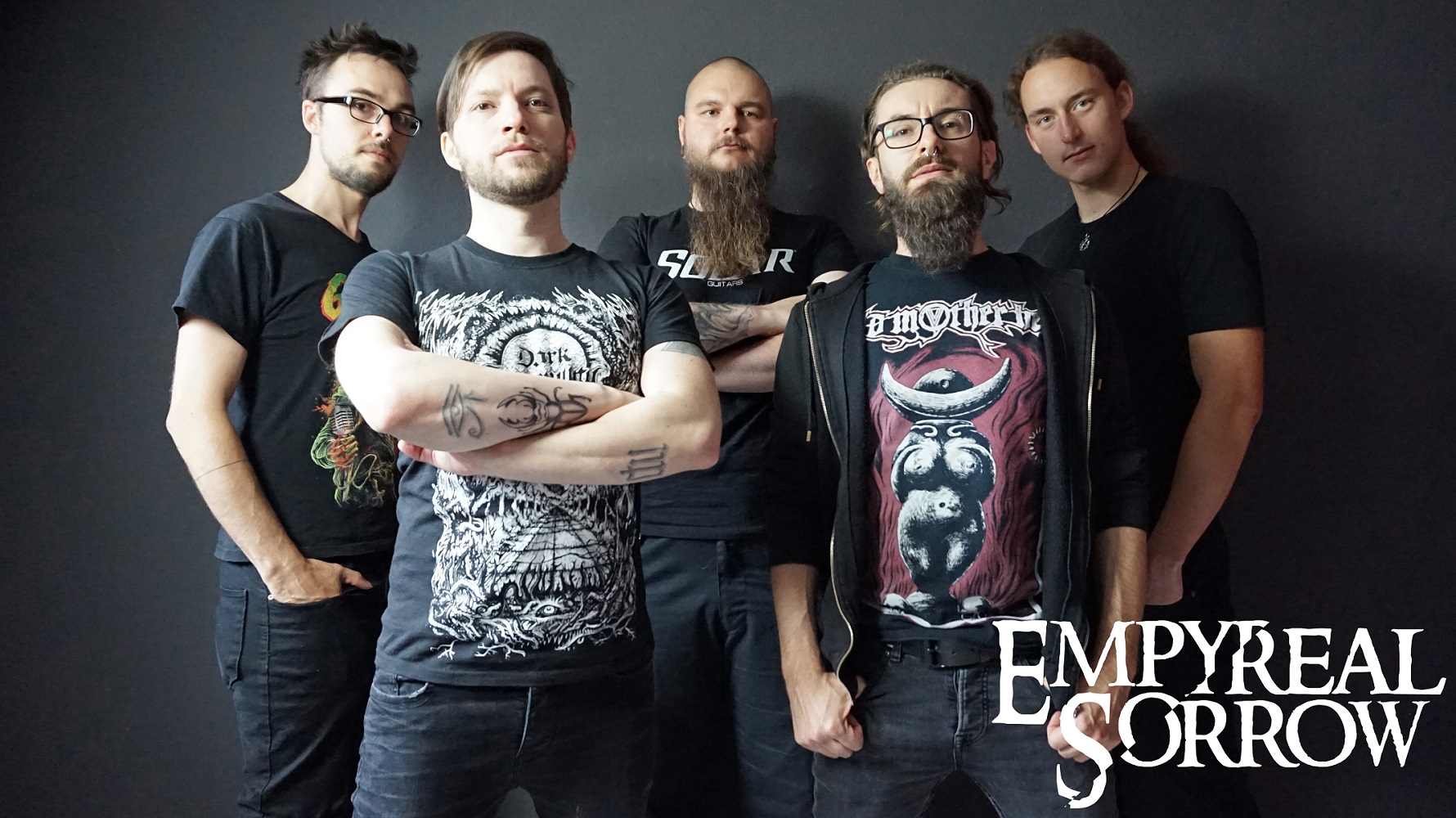 Before the release of PRÆY, their first full-length, I had the opportunity to talk with Martin Szeike, vocalist for the band Empyreal Sorrow.

Hello and first of all, thank you for your time ! Could you please introduce yourself and Empyreal Sorrow to us? As Empyreal Sorrow is a very young band, how did you manage to create the band and to play together?
Martin Szeike (vocals): We are a Melodic Death Metal band from Germany, mainly situated in the area around Munich, Bavaria. The roots of Empyreal Sorrow go back to 2014 when our guitar player Martin Hofbauer recorded the first song ideas with bassist Sebastian Moser. But as both of them were involved in other projects at that time there was never a real plan to do more than just playing around with some cool riffs. After Martin’s band project came to an end and he still had a massive pile of really cool song ideas, the two of them sat together again in Sebastian’s own Grotesque Studios, just plain recording guitars and getting the arrangements in shape. At that time Sebastian was also doing lot’s of studio recordings with our drummer Julian, and as Julian is an incredibly talented metal drummer it was just a natural thing to ask him doing the drums on the tracks that were already laid out at that point. So in the first half of 2019 we also had the first half of instrumental tracks ready. Joining as a second guitarist at that time was Markus Winter, who already played together with Julian in another band. As with Julian before it just clicked and for the rest of the year we concentrated on finishing and recording the instruments for all the rest of the song material that we had prepared. With 2020 starting we also began with giving the songs a “face” – as Sebastian was working out the vocal arrangements, we decided for another refreshing approach on our songs; we integrated more than just one vocalist to give everything more dynamics and to serve the diversity of the songs. That’s where our singer Martin Szeike came on board. While Sebastian is serving more of the Black Metal-like singing style, Martin is bombarding you with his utterly deep Death Metal grunts.

The band is about to release PRAEY, your first full-length. How do you feel about it?
Martin: We are very confident in the complete recording. All of us are making music for quite a while in different bands, experienced a lot of business shit and gained experience in creating songs that can grip the listener and especially ourselves. So the main focus while creating this album was always the headbanging factor and a good chorus. Let’s see how the potential audience reacts on the album. As we kept things quiet and did not show the finished product to even our closest friends it is a real cold start. But I love it to do it this way, it’s a nice experience.

How does the composition process happen?
Martin: The composition process at first was completely guitar driven as Martin had composed a huge stock of songs over the years that just waited to be polished and recorded. While we are putting together a song, we always have in mind what take the singer could put on a certain part. But the lyrics are always last – because most of the times the song gives you a certain vibe that leads you into a specific lyrical territory. Or the track gets a totally dumb working title that then takes over. Putting a song on repeat I slowly construct my vocal arrangements over a long period of time, until I am really satisfied.

The band’s watchword is “Join the cult of sorrow”, could you please explain us a bit more what you mean?
Martin: Most people believe in love as the strongest emotion and bond between one another. But we think that sorrow and pain unites us even more and can push you to grow beyond your own limits. We believe in this out of our own personal experiences. Sorrow is more honest than treacherous love, stronger than fragile valor and more divine than hypocritical forgiveness. But with the acceptance of pain as one of the most important parts of life, you can really reflect on your own self and see through other people’s actions. Sorrow is our leader through life and our band is deeply inspired by this emotion.

On the press release, they mention your disgust for mankind and the way people live or act everyday. It sounds really misanthropic, but you managed to translate this feeling to songs. What does inspire you to create your music?
Martin: It’s mainly devastation and destruction, the downfall of mankind. There is nothing that gives you so much inspiration as the look on today’s declining humanity. There is a constant frustration swelling inside of us because of how irrational and egoistic mankind is feeding on its own essence. It is not the most optimistic view or topic, but our music is our personal outlet for the anger and incomprehension we feel, when thinking about this planet and the swarm of human idiots flooding it.

If I had to put labels on your music, I’d say “Melodic Black/Death Metal”, which bands are your main inspiration and why?
Martin: Our vision when writing the first songs for Empyreal Sorrow was always straight Melodic Death Metal with a decent touch of this good old vibe from the 90’s. As we are all fans of bands like At The Gates, Edge Of Sanity, Paradise Lost, In Flames, Dark Tranquillity or even more modern bands like Heaven Shall Burn, it came out really natural when arranging and recording the songs. For fans of these bands our music should be a pleasing experience.

Do you have other inspirations, outside of music?
Martin: There is definitely one non-musical-interest and inspirational source within the band we all share and that is enjoying nature. We all come from countrysides where you are near to the woods or mountains and if there is something that really frees up your mind – it’s going into the mountains or just grabbing the bike and breathing fresh air.

There are nine songs and an introduction on PRAEY, which one is your favorite? There can be one for lyrics and one about playing.
Martin: There are definitely two favorite songs the complete band shares – Quiet Depression and The Error Code. And that’s because both songs have some sort of “speciality“. As Quiet Depression comes with a german chorus, The Error Code has a really strong melodic chorus with clean vocals that we all love.
Both came together more or less out of the moment. Our guitar player already had a german lyric line for Quiet Depression and with a small adjustment I thought why not do something unexpected and make it the centre of the song. The same happened with the clean vocals for the chorus of The Error Code; it was not really planned, it just happened while recording and felt really good.

I know that Covid-19 fucked up a lot of things this year, but do you have plans for the release of the album you could tell us? Maybe for the future?
Martin: The current Corona situation is not an easy task, especially for the entertainment industry. There are certain chances to do live shows, but we have to see if it is worth the risk at the moment. So right now we are mainly looking into how we can reach our potential fans on other ways, via Social Media in particular. For this reason we try to be as creative as possible, thinking about videos and other things with which we can entertain the people. For example: While recording our debut album we already prepared a set of songs for a future EP release that alone has the goal to widen our own musical horizon. On this EP we will experiment with some new influences and let other musicians be part of our Cult Of Sorrow.

Have you ever play on stage before? What can we expect of future live shows from Empyreal Sorrow?
Martin: This band came together as sort of a project and then formed into company of great friends and a band, but we never played live with Empyreal Sorrow to this day. But: We are also planning our future stage setup at the moment. The most important part in playing live shows is to give the audience an entertaining experience. With that in mind we try to avoid the stereotypical stage presence of so many Metal bands – just standing around, moshing and boring the crowd. All of us have longtime stage experience as live musicians and we know that activating the crowd counts way more in the end than playing every note right. 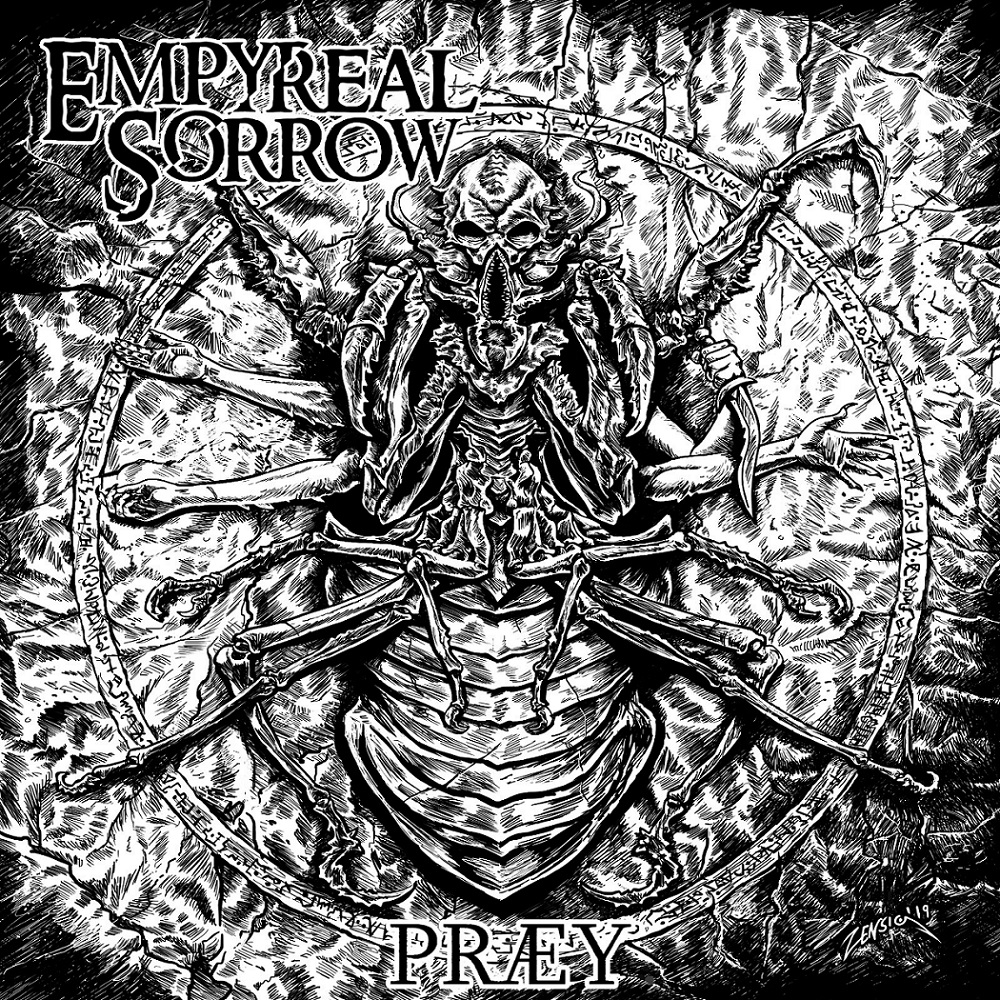 Do you remember the very first time you picked up an instrument? When and how was it?
Martin: I started with keyboard when I was eight, learning all the music theory and when I was starting with listening to Metal it just was not cool anymore. I then started with bass guitar, had lessons and immediately started playing with other musicians, which improved my playing and especially songwriting skills the most. My parents always supported me in whatever I wanted to play or learn. Today I don’t have that much time to practice anymore, but as I am constantly involved with music I still improve – at least I hope so.

What is your best and your worst memory about music?
Martin: Best memory is definitely a gig with one of my past bands at the german Summer Breeze Festival in front of at least 1000 people that were totally crazy and hungry for Death Metal. Nothing can beat that feeling. The worst memory is a returning nightmare – editing blast beats in my studio.

Except music, what are your hobbies in life?
Martin: I could point out things like sports but that would be a lie – in the end it’s always the music that consumes the most time in my life.

What if I ask you to compare Empyreal Sorrow’s music with a german meal? Which one would you pick and why?
Martin: Our drummer would say “Vegan Schnitzel with fries”… But for me, Empyreal Sorrow is like a crunchy power bar of insects wrapped in honey. Disgusting and yet still so sweet.

Last question for me, I offer you to create a tour with three bands in addition to Empyreal Sorrow, that would be the opening band.
Martin: That’s an easy one! I would definitely pick Dew-Scented, as our guitar player Martin loves this band. Next up would be Dark Tranquillity; I admire this band for their great combination of melody and aggression. Same for the headliner – the mighty Paradise Lost! Nick Holmes is a great inspiration for me in the way he arranges his lyrics. And the band as a whole for their always awesome and touching melodies.

It was the last one, thank you again for your time. Lasts words are yours!
Martin: We invite you to join our Cult Of Sorrow and receive salvation through sound. Keep an eye on our online appearances to get the latest news regarding the release of our upcoming album PRÆY. And always stay Metal!