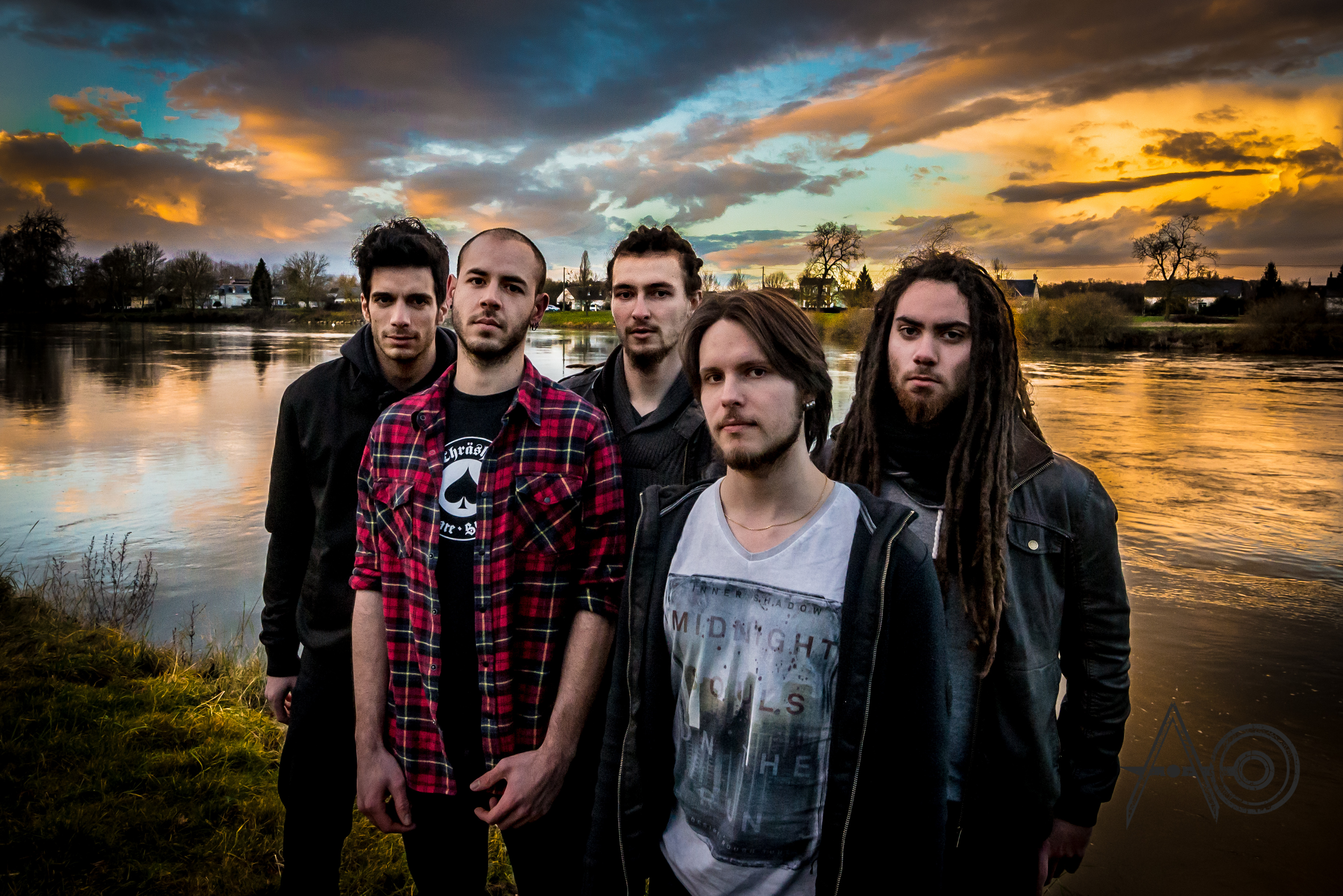 When I discovered them at MFest 2015, I started following Ao. Five cool french guys, that I decided to reach on social medias to know more about them and their music.
Version Française ?

Florent : Hi ! Ao is composed of Baptiste on vocals, Quentin on drums, Mathieu on bass, Antho on guitar and I am Florent, I play the guitar too.

F : It’s a mix of all that we love. From Death to Thrash, to Groove, with some Prog influences and sometimes ambiant on some breaks. All of this with a fast rhythm, on drums, guitar and bass, full of energy with highly saturated vocals, sometimes a massive growl from guts.

F : Our main influences come from Modern Metal, we won’t try to hide it. Gojira, Lamb Of God, Devildriver, Chimaira, Nevermore, but also Jeff Loomis‘ new path (ex-Nevermore guitar player, who plays nowadays with Keith Merrow and Ola Englund). This works for the band in general. Everyone listen to very different stuff just like blues, funk, progressive or ambiant rock, we’re also all Tool fans. Baptiste and Mathieu don’t listen so much Metal by the way. Some of us also listen to Jazz, our bass player often plays Free Jazz, some others movies soundtracks or Pop. We listen to every kind of music, and I think that this is why we don’t really have a limit, we cover all the interests and everyone feels good with it. As I said earlier, Ao’s music is very diversified, everyone can like it. This diversity also brings us to use effects from other styles just like delay or shimmer that U2‘s The Edge could use, or the late Dan Searle from Architects.

F : It was an unanimous agreement. We met at the Tous En Scène school during our musical development, back in 2012. We played in the same studio, overseen by Richard Chuat (Kronos‘ guitar player), and since the first song we worked together, there was a strong will about that.  We enjoyed recording covers and making studio shows during those two years. At the end of our graduation, we decided to reach Baptiste, who already sings for Dysmorphic, he listened two demos and he joined us on rehearsal the week after. Quentin officially sat behind the drumkit a short while after, and nothing changed since then.

F : That’s true, it’s already three years… To be honest, we didn’t even talk together (laughs). We’re just focus on the new tracks we’re composing, and some shows that are coming for the end of the year and next year, we didn’t even plan the first record’s composition deadline. We’re taking our time, we are waiting to have the right riffs, the right notes, the right themes with the right lyrics and that we all agree on. When we may wish to record, we will think to give the best of ourselves and at this time it will be the right moment to unveil it to everybody on stage.

F : Anthony left Beyond The Styx a short while ago, and it seems natural to us that Baptiste and Quentin play with Beyond The Styx, and also Kronos for Quentin. They play a very different music than ours in their respective bands, they don’t have the same influences, the same way of creating and playing, so this dissociation is natural. For their timetables, we check a long time in advance and everyone make concessions if needed.

F : It’s by accident that Baptiste finds a Maori translation at the time where we were searching for a band name. He searched « world » in a dictionary, and found this translation: Ao. He told us, and we enjoyed it because it fits to the themes we want to handle.
I cannot really talk in the name of the Maori culture, only Polynesians from those populations can judge it, but we all know, as French people, that they are men of honor that respect their ancestors and family, that « do good things ». We know them by rugby as warriors that never give up until the end and that try hard to reach what they really want, together. This kind of respect and awareness, by themselves, influence us in our relationships between us, in our music and in our way to work together.

F : Without any individual perspective yes, of course. The awareness has to be collective, and not only individual. I let Baptiste explain this better than me, because there is a link with the other lyrics.
Baptiste : The fact is that our specie is evolving in an egocentric path while forgotting that a human being, alone in our wide world, has very few chance of survival. Also, in the grand scheme of things, we forgot that we’re just a tiny grain of dust in the universe and our decisions, large or small, won’t have any impact on it. With simple words, our existence is a miracle of evolution without any precise goal, and it would be time to inhibit our ego or the purpose of living together with our fellows and taking care of the environment.

F : We previously work individually on riffs, or by group of two or three when we meet to work at someone’s house. Then we record a demo, we play the song on rehearsal many times if necessary, and usually we modify it a bit, add stuff or refine some riffs, extending or shorting some. We’re reviewing it on many points. Until it is definitely record in a production, we can modify the song to the last moment, even right before the recording! Some ideas are born from jam between us, it could happen.

F : Of course, it was our first « big stage » alongside huge bands like Fleshgod Apocalypse, Melechesh or Crisix. We were instantly super motivated, and we were full of unusual energy for the EP’s release party in an overcrowded pub!

F : Hahaha that’s not really wanted for everyone (laughs). I didn’t want to look like Devin Townsend in a while so I had no choice but to cut them… I don’t really know, probably a desire to not spend two hours to wash and dry dreadlocks. But it already started to grow again if this reassures you.

F : Firstly to you: thanks for your time to ask us questions, it’s a pleasure and the whole band thanks you. Thanks also to all our fans, during shows, on Facebook, Twitter or anywhere else to move yourself from just a clic to headbanging and mosh pit during shows. We cannot wait to meet new people on the road or in the pit.