In 1993, Dark Funeral was born in Hell thanks to the guitar players Lord Ahriman and Blackmoon (RIP 2013). Quickly joined by other musicians, they release EP and full-lengths until Angelus Exuro Pro Eternus (latin translation for « may the angels burn for eternity »), their fifth record in 2009.

Composed of Lord Ahriman and Chaq Mol on guitars, B-Force on bass, Dominator on drums and Emperor Magus Caligula on vocals, this record (with the help of Peter Tägtgren (production, mix) and Carlos Aguilar (photos)) is one of the most emotional record of the band. The lyric’s topic are a bit different, but stays in the band’s universe. 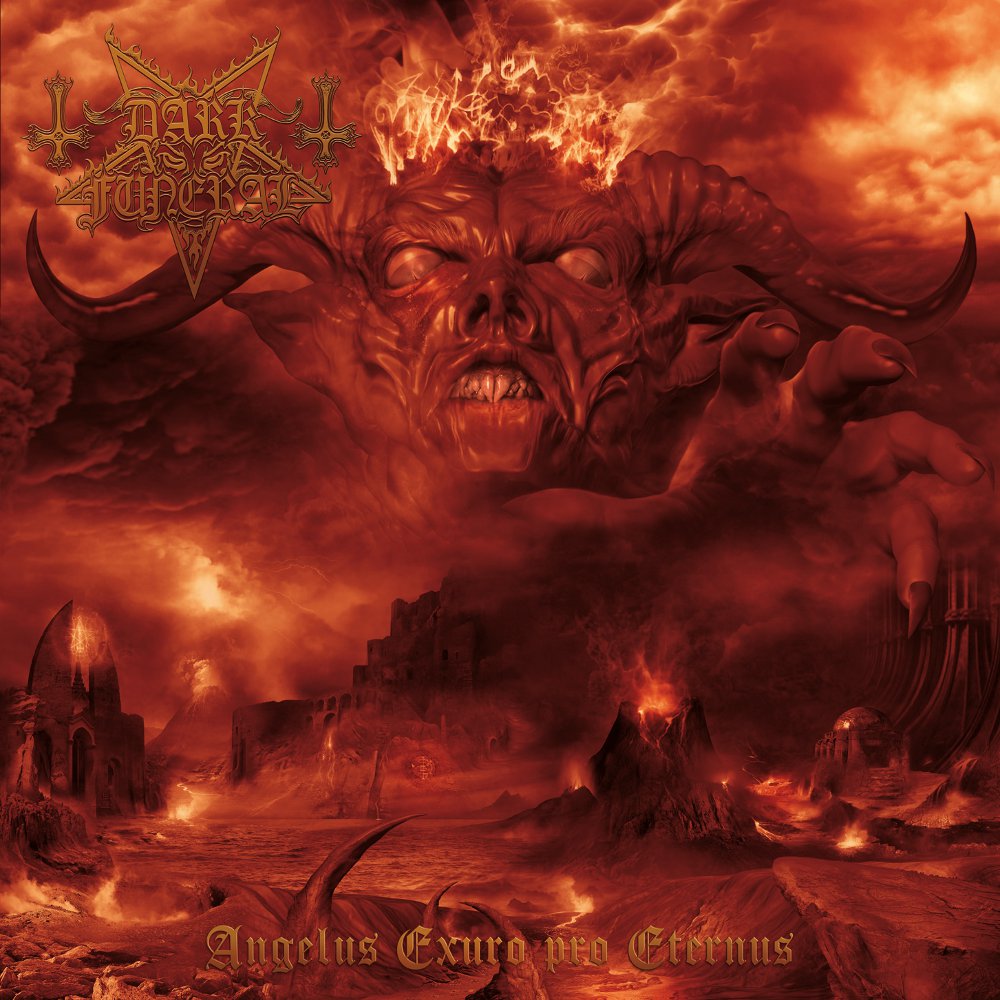 The End Of Human Race starts fast and furious, we are barely able to hesitate before being thrown into the eye of this infernal storm.  The Birth Of Vampiir increases the composition’s violence, Emperor Magus Caligula makes himself heard with his wonderful voice. Lord Ahriman, the main songwriter, surpasses himself on this record.
Stigmata is the opportunity to go back on slow tempo, but also dusturbing tones that the band masters. With choirs, this track sounds ceremonious. My Funeral (with a video) lets us investigate on the reasonable sound of the band. The lyrics are about demons and death, but on something concrete : a man’s funeral. It’s a harrowing testimony.
Angelus Exuro Pro Eternus leaves again on the two firsts songs pattern, fast and powerful, whereas Demons Of Five reminds us the band’s early material. Declaration Of Hate focuses on bass during the intro, but also jalis our mind for the next song with atmospheric riffs.
In My Dreams, in my opinion currently the best song of the whole discography, is the emotional song of the record. Lyrics are about a love sorrow, far from anti-christianism, but with the band’s pen. This song offers aerials and atmospheric riffs, but perfectly fits to the atmosphere. Emperor Magus Caligula‘s voice is creepy because of the feelings he puts into.
My Latex Queen will close this record with a come back to the famous receipe that the band use on previous records, but with a slow passage.
Dark Funeral‘s sound has changed. Their sound is obviously distinctive, but Emperor Magus Caligula and B-Force were replaced by Heljamrmadr and Natt. In just a month Where Shadows Forever Reign (their new record) will be release and the upcoming show at Hellfest is one of those I expect the most.