When dark arts are unleashed, when storms from all five continents gather, it is time to listen to Belphegor‘s music. Created in 1991 in Austria under the name of Betrayer, they switch their name to Belphegor during 1992 to deliver us a powerful mix between Death and Black Metal. Nowadays composed of Helmuth (guitar/voice since the very beginning), Serpenth (bass/voice since 2006), Simon « BloodHammer » Schilling (drums since 2016) and a session guitar player for live shows, the band released their tenth full-length in 2014 and is now recording the eleventh one.

It’s on Blood Magick Necromance that you can find my favorite track, so it’s on this album that we will focus today. Mixing satanism and sex, their songs exceed the expectations. Key player of the european Black/Death scene, they furrow stages around the world to cultivate their music with a true violence. On stage, false blood, leather, sick scenery, SM masks… They use the whole imaging. If you never had enugh luck to attend a black mass, I advice you to be a bit prepared… 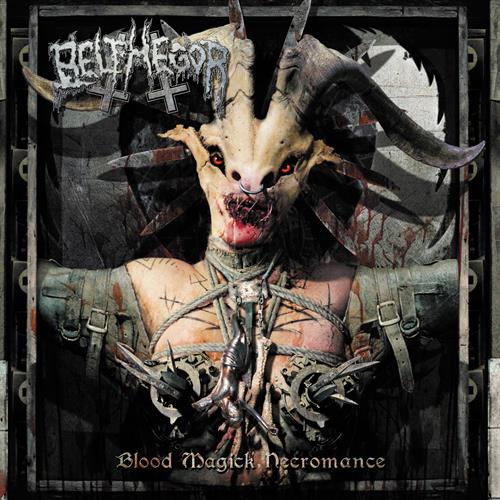 In Blood – Devour This Sanctity is the opening track. A clip was record years ago, and really shows what the band is able to do on stage. Since the first second, it’s a fast track. Devastating riff, more than violent kicks, and Helmuth‘s voice seems to be ready to eat whoever is in front of him. Some effects will create a semi-religious environment. Rise To Fall And Fall To Rise is a bit more relaxing, but isn’t less catchy. An awesome track with an insane chorus, but it’s in my opinion an underestimated track.
Blood Magick Necromance digs deeper in the band’s Black metal roots. The lead guitar takes over to guide us wherever they want to lock us : an ocean of pure violence. Discipline Through Punishment will break the frenetic pace that were previous tracks, with a clean introduction, near from atmospheric sound. Guitars will stop for a moment to let Helmuth with the rythm part (drums and bass) before coming back strongly. Angeli Mortis de Profundis is the very opposite : infinite violence during three minutes. Barely rests, a solo on the middle of the track to claim that they really master their instruments.
The following track is the one with whom I discovered and love Belphegor, Impaled Upon The Tongue of Sathan. An insane rythm part that won’t forget to alternate atmosphere and violence, a huge voice and merciless blasts, bells samplers on the end… A masterpiece in the record. If you think it’s the end, you’re wrong. Possessed Burning Eyes will wake us up after the religious outro. Once again, a suitable mix between blasts and powerful riffs, Belphegor’s trademark. A military sound thanks to the snare, then the whle band comes back.
The last one, Sado Messiah, is in my opinion the best one, regardless of the album. Not really the quickest one or the most violent one, but the one that combines the band’s every aspect. The riffs are both bloody and atmospherics, the fact that they add Serpenth‘s voice on the chorus to support lyric’s violence (which already have a certain level of evilness), and cymbals to destroy everything. The track is a must-hear, but once again underestimated, and I strongly that they don’t play it on stage.
You needed a powerful music under its most pure and thoughful form ? Congratulations, it’s the right place. They suffer a bit from Behemoth‘s shadow, but Belphegor drills out since years. The band’s sound never really changes through years, and each full-length is a feast for ears.