Have you ever let yourself drown into a band’s music, and only wake up at the end of the record ? I did it with Insomnium. Created in 1997 in Joensuu, Finland, by Niilo Sevänen (bass/vocals) and Ville Friman (guitar/choirs) to play Melodic Death Metal, they hire a while after the creation drummer Markus Hirvonen and guitar player Ville Vänni, that replaced another guitar player in 2001, and who will be later replaced by Markus Vanhala (who also play guitars for Omnium Gatherum and Malpractice) in 2011.

Insomnium released in twenty years seven full-lengths, two EP, two demo and a split with Omnium Gatherum, another finnish Melodic Death Metal spearhead. Their first record is only out in 2002, letting five years to the band to finalize their riffs and their sound. In The Halls Of Awaiting is a record with a rare level of intensity and simple riffs but full of emotion, with the help of Varpu Vahtera on keyboards. Just take headphones and lay down to benefit fully of their music… 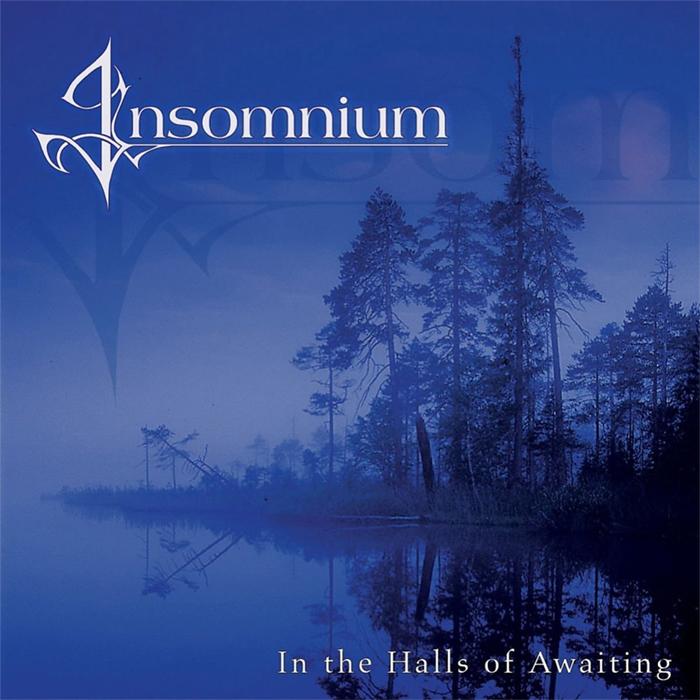 Our journey through time starts with Ill-Starred Son. A clean sound introduction on which grounds whispers that let place to a saturated heavy sound and wild screams, but without denying the melodic side. Even when they increase speed of execution, the lead guitar allows them to keep their atmospheric dimension until the final note. Song Of The Storm, ways more aggressive, has the mission to break necks with sharp riffs, while Medeia comes back to a slower melody, but also a heavier one, and with a deeper voice.

Dying Chant picks up this raw side that the band is able to blend with mesmerizing melodies on the chorus, but it’s easy to say that the clean voice with echo is fascinating on The Elder. On this song, it’s on the alternance between saturated and clean riffs that the finnish decided to play. Black Waters carry the torch of the aggressive song with bloody tasting riffs tagged with harmonics. It’s a true storm of violence that surges on our spirit, and our muscles will remember…

If you missed melodies, I let you pursue with Shades Of Deep Green and its melancholic whispers that cuts off with Niilo Sevänen’s screams, whose tone of voice perfectly fits with a double drums kick onslaught or with a far melody. Keyboards come back on The Bitter End’s introduction that will let once again place to a ten years younger Melodic Death Metal in few seconds. The voice, tortured as always, guides us to the last two songs.

Journey Unknow seems wanting to hasten us over a pit to catch all our attention with a well inspired lead guitar from the song’s very beginning. When the last riff disappears in the void, In The Halls Of Awaiting, the final song that lasts near from eleven minutes, comes. This song takes every element of what you could ever like in the whole album : whispers, wild screams, double bass kick tornado, calm rhythm… This track is striking from the first to the last note. We must thanks Varpu Vahtera for this outstanding keyboard outro.

Near from a hour has vanish until the album started. You don’t trust me ? However, it is true… Insomnium has the power to make our mind travel thanks to their music. The last record, Winter’s Gate was played in its entirely during the last european tour, but we mustn’t forget where everything started. In The Halls Of Awaiting, the absolute spiritual resurgence.