Far away from closed codes of Finnish Metal, Ville Valo (voice) and Mikko “Linde” Lindström (guitar) created HIM. The band’s musical style blends together many influences : Gothic Rock, Heavy Metal, Alternative Metal and Pop, under the name of Love Metal (officially launched some years later with the eponymous record). They are quickly joined by Mikko “Mige Amour” Paananen (bass), then Gas Lipstick (drums) in 1999 and Janne “Burton” Purttinen (keyboards) in 2001. Even if Gas Lipstick was replaced by Jukka “Kosmo” Kröger in 2015 after his departure, this line up will remains timeless in the eyes of the world.

During their quarter of century long career, HIM released eight full-lengths, some of which more notable than others (mainly Love Metal, Razorblade Romance and Dark Light), an EP, a live DVD and seven compliations. On March 5th 2017, they announce that the band will break up at the end of the year. When I discovered the band eight years ago, their original and code-breaking music seduces me, and finally never leaves me. I couldn’t choose a single record, so I decided for the first time to do my review on a compilation : And Love Said No, released in 2004. 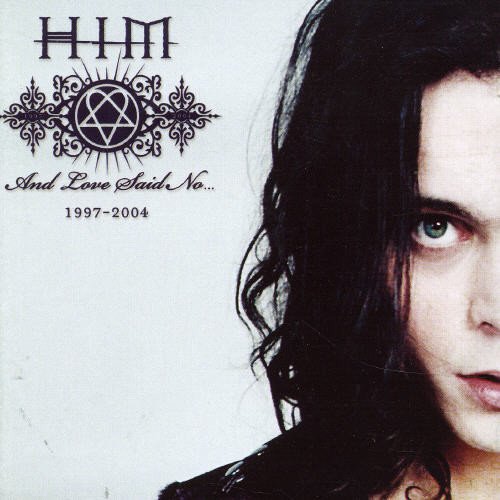 Let’s start with the eponymous track, And Love Said No, which is also an exclusive track. After a quick introduction, it’s a catchy song that we discover, but also etched with deep melancholia. This feeling continues with Join Me In Death, an older song, but also the first one that I heard from the band. It’s the voice changeover between Ville Valo’s clean voice and deep choirs that seduces me back in time, this track definitively never gets old. Iconic track, but also a furious one, Buried By Love will challenge Ville Valo’s divine voice with a scream in addition to the energetic chorus.

We come back on the band’s Pop tones with Heartache Every Moment, that still keeps the heavy aspect thanks to Gothic Metal rhythm parts. Second exclusive track, Solitary Man is a cover from Neil Diamond, made by HIM. Ville Valo’s deep voice makes this song a catchy one, just like Right Here In My Arms, that takes advantages of the band’s particular universe with the singer’s melodic voice. The Funeral Of Hearts could sounds like a simple Power Ballad, but in my opinion it is more than this. The world’s entiere sadness pass through its riffs.

In Joy And Sorrow stays barely quiet, by means of many acoustic parts, and even saturated sound on choruses won’t change this. Another staple song of the band, Your Sweet 666. For this release, the song was re-recorded by the band, to profit of the mix’s same intensity than all HIM’s song. Gone With The Sin focuses on acoustic sound, and Ville Valo’s warm voice is enough to create every emotion needed. The final part is truly absorbing.

Everyone knows Chris Isaak’s Wicked Game but only a few of us know HIM’s version. However, this song is one of those that contributed to make them begin their career,because this one is their first single ever. After a keyboard introduction, The Sacrament comes, a track that I didn’t hear about. The band’s whole universe meet in this song, but it won’t stay forever stuck in my mind. Close To The Flame allows to acoustic fans to enjoy the band’s beauty and simplicity.

The track that makes me shiver for years finally comes : It Is All tears (Drown In Your Love). An awesome disparity between the deepest voice ever and Ville’s battered acute voice. This track sums up all I love in the band’s universe. Another classic track, Poison Girl brings us back to the band’s second record, and settles up an intimist and melancholic environment. Pretending increases the tempo with its joyful riffs while heavy and slow riffs come back with When Love And Death Embrace, the last track.

An extraordinary voice, a Gothic monument, an unique and intemporal universe. That’s how I would resume the band that makes me understand that Metal isn’t only a violent and fast music, but that it is also possible to create full records in Love’s name. It was a real bummer for me when I first heard that the band will break up and there is no French show announced, but I will try my best to be lucky enough to go to one of their show at least once in my life. Luxembourg isn’t this far after all…