Is it possible to create a worldwide known Metal band twice ? Yes it is, just ask to Dez  Fafara.

He started to be recognized with Coal Chamber in 1993, but when the band separates ways in 2003, Dez creates Devildriver the same year. Quickly gathered by Mike Spreitzer (guitar since 2004), Dez will play numerous years with Jon Miller (basse 2003-2011), John Boecklin (batterie, 2003-2014) and Jeff Kendrick (2003-2014). The band then recruits some other musicians (Chris Towning then Diego “Ashes” Ibarra on bass, Neal Tiemann on guitar and Austin D’Amond on drums), but it’s with this line-up that they will compose most of their albums.
In my opinion, the best one, and the one that sticks the most to the “great glory” period is Pray For Vilains. Thirteen tracks (seventeen on the limited edition), but this album represents the band’s sound. American Metal’s spearhead is ready to bring their riffs on our face, I hope you’re ready too ! 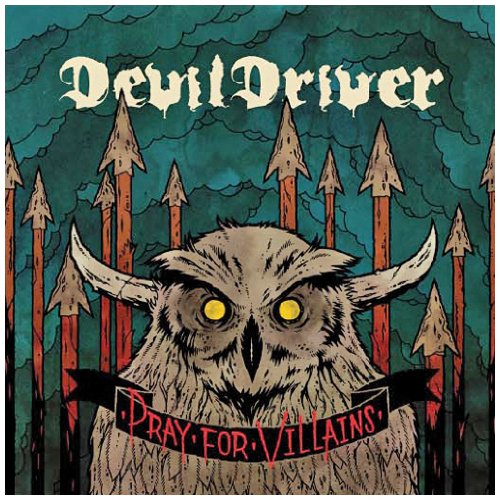 The band starts with the eponymous track, Pray For Vilains. The first riffs sounds, quickly joined by other instruments, and Dez screams. This song slowly introduces us to the tortured and rhythmed american band’s universe. Pure Sincerity focuses on the riff’s joyful aspect while the drummer sets the power to make his double drum kick agonize. Let’s continue with Fate Stepped In, another tortured track, whose riff will make way for numerous headbangs on stage. The track’s outro will offer us rest to shackle better.
Back With A Vengeance is a song on which we almost want to dance. The main riff is catchy as fuck and it’s a furious pit that is unchained on this one when the track is part of the setlist. With its atmospheric introduction, I’Ve Been Sober tells alcoholic setbacks on a fierce rhythm part, while Resurrection Blvd slows tempo down and chains with the record’s most epic lead guitar riff. This track, as disturbing than relaxing, is my favorite one.

Let’s go back on pure violence with Forgiveness Is A Six Gun, that won’t deny melodic side, while Waiting For November totally focuses on it. Melodic Death Metal fans will love it from beginning to end. Suddenly, tempo decreases with It’s In The Cards, a bit heavier and martial, this track is also an atmospheric one. Another Night In London and its catchy lead guitar riff slowly leads us to the next track with a monumental one.

Bitter Pill is a track on which it is impossible to stay motionless. The chorus immediately initiates neck moves, from the first to the hundredth time ! It will also be the case for Teach Me To Whisper, that won’t let speed lovers on their hungry. This riff is made for stage. The band won’t think more to unleash I See Belief. It’s with such track that we can recognise an awesome singer that is able to chain numerous voices : scream, growl, all with such a velocity…
Bonus tracks will come back on the band’s famous aspects, a catchy lead guitar for Self Affliction, a heavy sound for Dust Be Thy Destiny and a warlike riff on Damning The Heavens. The last track, Wasted Years, is an Iron Maiden cover that seems to be written to be covered by Devildriver. Purists will spit on it, but in my opinion, the band fully appropriates this track, and it’s it’s impossible to not head Dez”s scream on the original version !

Awesome work. It’s the only words that could qualify this record, because there is not a single track to left behind and they can all fit in a rich discography. Even eight years after, the record didn’t change and it’s a pleasure to listen to it. Even if Devildriver has difficult times, the band will come back to offer us a brutal fix on some summer festivals ! I’m restlessly waiting for my first live show !