You thought that I left japanese enigmatics and quirky universes ? Wrong. Created in 2007, Kiryu is a Visual Kei band with an original and violent imagery.

A joyful music, sometimes printed by Folk or Metalcore music, an insane and perfectly mastered voice, that’s how we could describe this project formed by Kurosaki Mahiro (voice), Sakai Mitsuki, Kujo Takemaso (guitars), Isshiki Hiyori (bass) and Tokai Junji (drums). With an EP and four full-lengths, this very famous band in their country has an “alter-ego band” : MyDragon, that plays japanese pop. What if we focus on Shuka Ensen, released in 2012 ? This record is in my opinion the one with the most important musical diversity. Don’t even expect ordinary tracks, you have been warned. 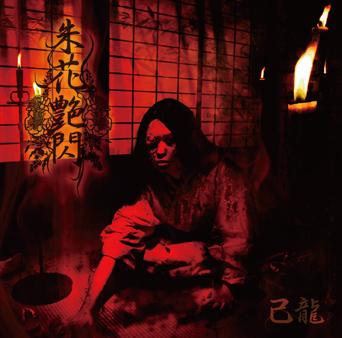 The record will start with Gokumon, that blends traditional wind instrument sound with massive riffs to lead us to Mahiro’s complaining voice. Some screams will cut through the song’s quiet and melancholic aspect, while Kisai focuses on a saturated and jerky rhythm part to drive us to the band’s particular universe. Still not convinced ? So Kassai and its happy riffs that contrast with wild screams will surprise you ! Notice the lead guitar riff’s technicity.

Benitsubaki and its ethnic percussions are announcing a folkloric based track, and it’s precisely what the band will offer us. Just few saturated riffs on this song, it’s a quiet rest that allows us to recover before Yougo. Because Yougo will surprise you for sure. Ambiant stuff, clean and quiet voice, and a bass sound imspired by Progressive Rock. Where the hell is the beginning’s intensity ? At the end of this track. And on Shuka Ensen, if you take the time to wait after the introduction. Oh, and don’t forget to have a look on the video clip to understand what I said about “violent imagery”.

Mahiro will makes us shiver than ever before while his bandmates give us a frightening music, while Bakeneko will be ways more direct. A fast song, interrupted by acoustic moments that gives it a particular energy. Yoiduki calls for electronic samplers to convince, and the enigmatic lead guitar that we can hear on the beginning forces us to stay on the alert until the last note, when Utsusemi softens the sound with popish riffs. Some effects in the voice made it an interesting song, by the way.

You thought that Japanese Metal rhythm parts disappeared ? Kyousei will claim that you’re wrong with an enchanteress lead guitar as the voice will become deeper and deeper, while Namida Uta won’t even warn anyone to unleash blast beat. Even if its riffs are drowning under keyboard sounds, violence is real and present. Tenge plays once again with the outstanding intensity that the band can reach with this final ballad. If the main riff is only composed of the bass/drums/vocals/keyboards, the guitar addition will make this track’s splendour explode.

Did you really think I will talk about a pop record ? Even if it is hard to enjoy, I admit it, this full-length is really interesting. Not only by the contrast between songs, but also by the emotion musicians can create in each of us. Whether they are positive or negative, reactions to Kiryu’s music are real and tangible. It’s once again an art that bands from the Land of the Rising Sun perfectly control…