Once again it’s on an American Death Metal legend that I want to introduce you today, welcome in Suffocation’s technical and violent world!

Renowned as one of the genre’s pioneer, the band led by Frank Mullen (voice) had a small break during four years in 1998 before coming back stronger than ever. If Terrence Hobbs (guitar) is in the band since 1990, they have to wait until 2004 for Derek Boyer’s (bass) firsts steps into the band, while Eric Morotti and Charlie Errigo (respectively drummer and second guitar player) are just in since 2016, for the eighth and last album’s composition. But let’s slightly come back in the past, in 2009 for example. When Blood Oath, their sixth record, was out, rhythm guitar were Guy Marchais’ job and furious blast beats were signed by Mike Smith. Are you ready? You’d better be, because they are. 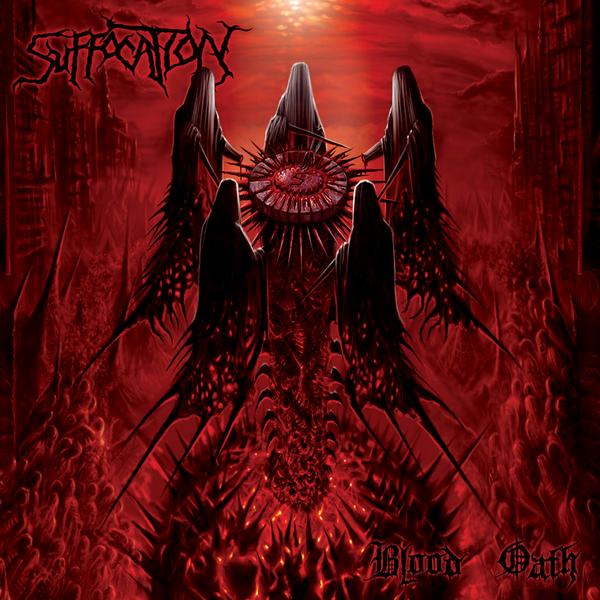 Let’s start on the eponymous track, Blood Oath’s harmonics and its crippling double kick. This song perfectly illustrates the mix between technical riffs and heavy rhythm track. The bass sound was the thing that instantly seduces me. A sound that slams on each note. It’s the same recipe with Dismal Dream, but with an unholy rhythm part that let us mind that there is a filthy BlackDeath inspiration, while Pray For Forgiveness focuses on the musician’s irreproachable technicity. Each of them have its own place under Frank mullen’s growls, and there is no missing note in this devilish chain.
Let’s come back to speed and blast beat on Images Of Purgatory and its mesmerising harmonics while a violent headbang will start when you hear Cataclysmic Purification for the first time. This madness oriented rhythm track is really catchy, and it’s not rare to realise that your are slowly nodding without being conscient. For Mental Hemorrhage, it’s a fully aware one, and the band give all they’ve got to offer us some as massive as subtle riffs. Come Hell Or Highest Priest focuses on technicality since the very beginning, without forgetting to add an ideal rhythmic for crowd movements, just in case they play in on stage.
It’s once again a disturbing rhythm track that comes alive under the band’s strings for Undeserving while Frank’s growls are deeper than ever before. If you’re still not convinced by this track, I let you with Provoking The Disturbed and its bass sound, just as massive than magnificent. If you’re as into Derek Boyer’s sound as me, you’ll really enjoy this track. The record’s last composition’s name is Marital Decimation. Started as a technical track, it’s Brutal Death sound that gets in the way. Some breaks into riffs gives it a particular rhythm.

Suffocation are legends in Death Metal, and it is not an accident. The band afford to reach technicity limits while having their very own sound. There is many people that claim to be influenced by their albums when they start to play Death Metal and next generations seems well on its way to have some flagship albums too!