I’m pretty sure that you need some morbid poetry in your life. Served with a huge slice of raw violence, Infant Annihilator is here to help you.

Created in 2012 in England by Eddie Pickard (guitar, bass) and Aaron Kitcher (drums), both also playing in Mister Sister Fister and Black Tongue, they hire in the first instance Dan Watson on vocals, who lefts the band in 2014. But 2016 announces the coming of the screaming colossus Dickie Allen and also their second record, the unpronounceable The Elysian Grandeval Galèriarch. The band never played on stage yet, for the simple and unique reason that they judge their music is impossible to play. And it’s true that some parts are not from mankind. I let you try… 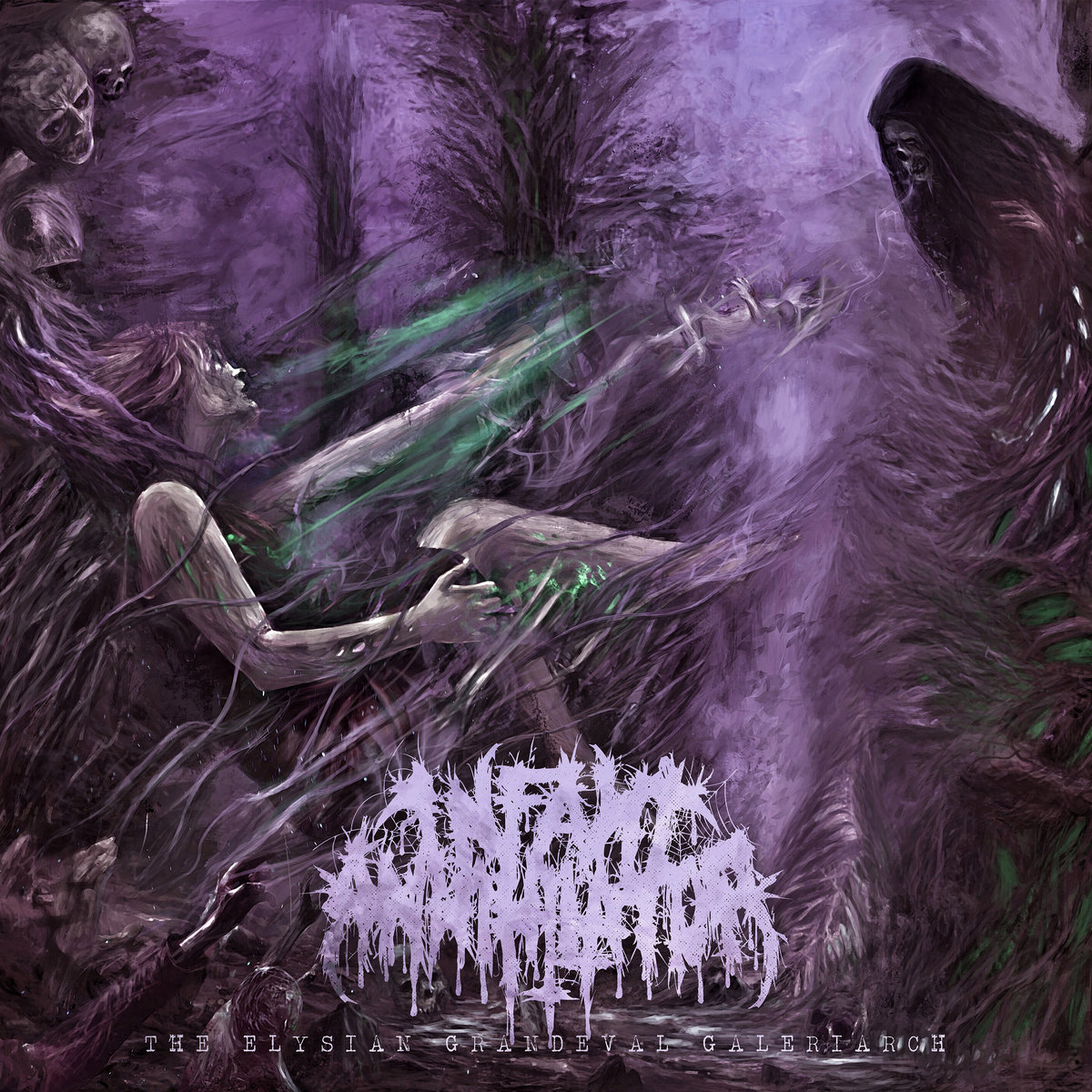 The record starts with Unholy Gravebirth’s disturbing sampler, on which a child cries before its screams become beast yells. The rhythm part quickly confirms us that this character is not human anymore, while Dickie’s roars comfort us in the idea that he is the one and only for this job. Crucifilth isn’t soft neither with furious blast beats and an amazingly quick lead guitar part at the same time, while Motherless Miscarnage puts over any notion of humanuty for dantean riffs.
Back on technical violence on Baptised, Bastardised, Sodomised with a heavier rhythm part but that easily changes for our neck’s pleasure. You think that Deathcore doesn’t deal with logic and technicity? So I let you enjoy Behold The Kingdom Of The Wretched Undying that lasts more than seventeen minutes, with the help of Chris Whited from King Conquer, Bryan Long from Dealey Plaza, Dillon Becker from AnimalFarm and Tyler Shelton from Traitors. This track has many universes as per who helps Dickie on vocals, but every part can obviously be linked to the band because it describes every period that their sound can cross : savage breakdowns, heavy but slow parts, or unhealthy lead guitar parts.
It’s Soil The Stillborn that clears everything with a fast and violent track just as we all love them after this innovating one, while Paedophilic Ultimatum is more an interlude that a real song. However, guitar riffs perfectly introduce Neutred In Utero that focuses on a technical lead guitar to convince a crowd that already breaks their neck.
Another track that competes with the speed during a long time, Pelt Of Flesh can be divided into parts according to its intensity. Blasphemian reveals to be, despite its duration that can disheart some of us, one of the most interesting tracks. Its disturbing, quite Progressive introduction, has a video clip that is a pure gross indecency, while riffs are massively amazing. The last “composition”, Neonatalimpalionecrophiliation, isn’t more than a joke from the band to perfectly ends the record.

If you came for political statements, you’re not in the right place. But if violence led you on the last Infant Annihilator monument, you’re on the perfect one. The British gave full-throattle to finish this record, and without being rude to the previous ones, it is ways better. Maybe one day they will find the courage to travel through the world to offer us this wall of sound.