While fantastic creatures that make people dream are an ongoing theme in Power Metal lyrics, the german guys from Powerwolf choose to use those that scare us for their imaging.

Created in 2003 by Charles (guitar/bass) and Matthew Greywolf (guitar), they’re quickly joined by Falk Maria Schlegel (keyboards), Attila Dorn (vocals) and Stéfane Funèbre (drums). They opt for a guitar duo on stage, and to use a corpse paint inspired by pale undeads and used clothes. The first album is released in 2005, and is well received by reviews. The next ones follow until Stéfane’s departure, who will be briefly replaced by Tom Diener, before stepping aside for Roel Van Helden for an album recording in 2011. They officially hire him as a permanent drummer, then record Preachers Of The Night in 2013. It’s obviously not the band’s last record, because another one was released in 2015 and a new one is currently in process, but it’s the one that impressed me the most. Wolves are released! 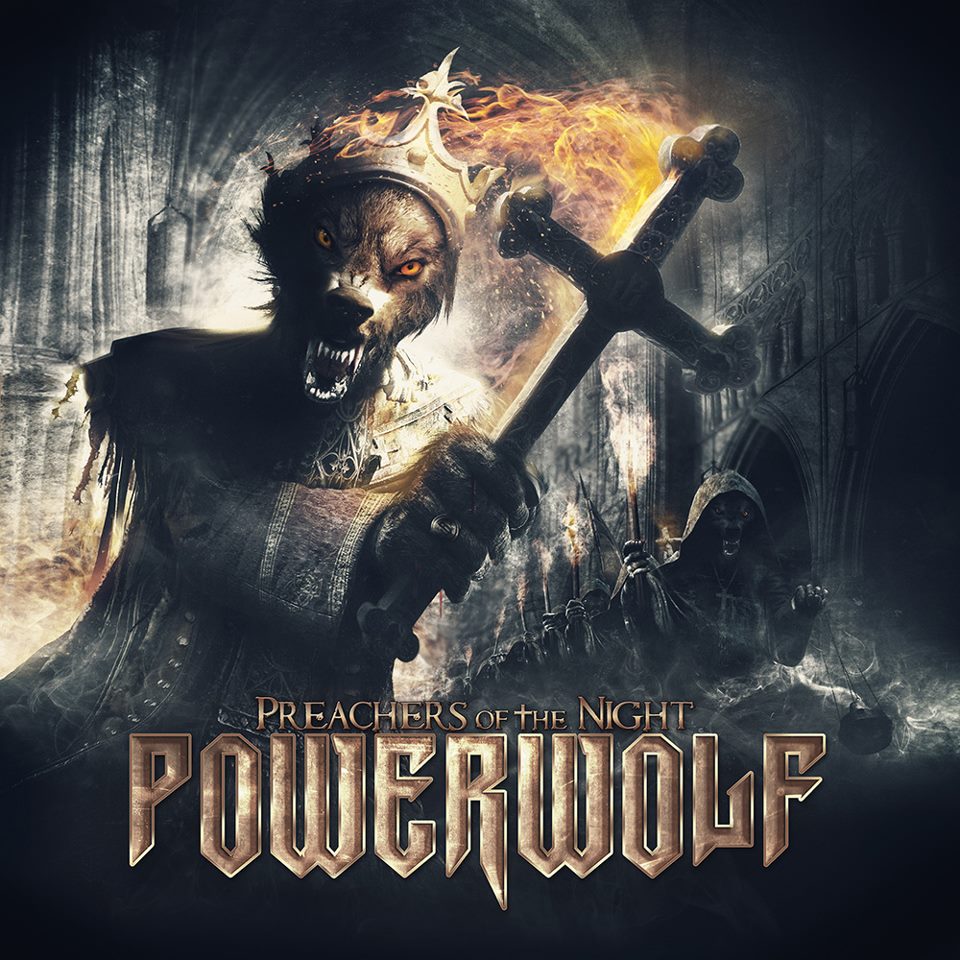 The warlike Amen & Attack will be the opening track. Fast and very melodic, this song will directly skyrocket us to the german band’s universe, that laughs about religion. Attila’s particular voice perfectly fits to this raging rhythm track, supported by the keyboardist’s orchestral stuff. Lighter, but still as fast as the previous one, Secrets Of The Sacristy makes us enjoy once again the german’s skill for a federative composition that can make a whole audience headbang, while Coleus Sanctus inspires us to stamp alone, in rhythm with orchestrations.
Way more dancing, the band offers Sacred & Wild, with its catchy chorus and that allows us to sing with them, while Kreutzfeuer is more solemn. Its near from military rhythm part however seduces thanks to Attila’s uncommon voice, who chants in latin. A new fast performance, Cardinal Sin becomes one of the band’s best hits. Religious sounds allow near from Symphonic breaks before coming back on a pure Power Metal chorus. Once again based on martial riffs, In The Name Of God (Deus Vult) and its jerky rhythmic will wreck wavok as much in your speakers as in a festival crowd.
After a mystical introduction, Nochnoi Dozor takes over for a new fix of raw strengh, fulfilled of the german’s touch that allow us to separate themselves from the other bands. Lust For Blood is halfway between a composition that focuses on speed and a dancing rhythmic, but it’s still a convincing song thanks to the ritual ambient that rules over the chorus, and which is the same than Extatum Et Oratum’s one, but this one has more melodies and harmonics. The band keeps this atmosphere for Last Of The Living Dead’s introduction, the last and also most quiet track but that doesn’t spit on the melodic side and ends on a storm sampler to close the album.

Wolves were unleashed on this album that perfectly alternates between several ambients, while it stays on their sharp universe. If Powerwolf grows so much in recent years, it’s partly thanks to Preachers Of The Night which is of outstanding quality. The band is often on the bill of europeans festivals, and many shows of their numerous tours are sold-out. The band soon goes back hunting with bloody riffs.