Named Shadow Gripped, this sixth album seems like the band will live again for real. Created in 1987 by Ian Buchanan (bass), Carl Stokes (drums) and John Walker (guitar/vocals), they had a long period of hiatus between 1996 and 2003 then another one between 2006 and 2013. If Ian won’t come back with the band in 2003, he’s definitely back in the veterans trio (that sometimes was a quartet, with a second guitar player). Although, the best way to know Cancer is to listen to their music! 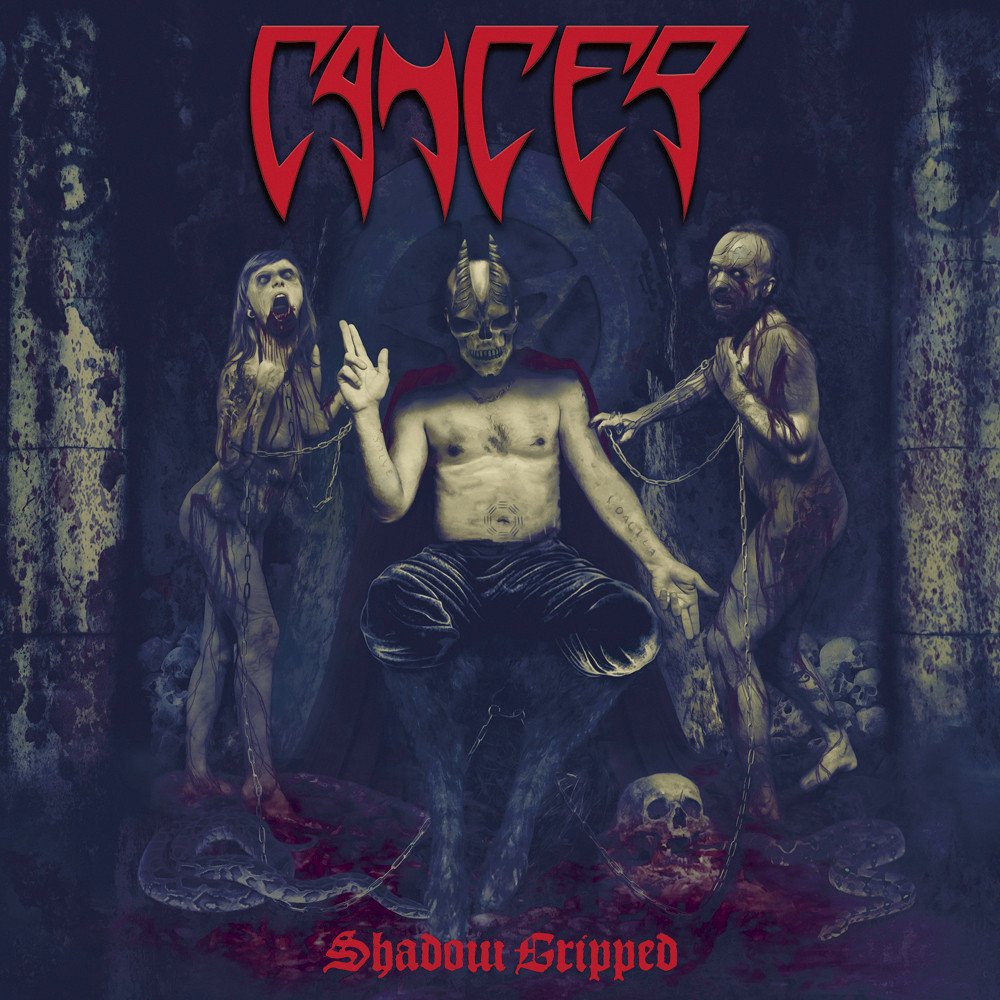 Down The Steps powerfully begins the record with some worthy of the band’s reputation riffs. It seems like Thrash, but not really because it’s darker. It seems like Death, but not really because it’s too shrilling. That’s what we love in Cancer’s work, this happy medium with a calm introduction, and a heavier rhythm. However, Garotte is a faster track, in an Old School way that doesn’t lose a single second of riff to show what the band’s got, with an impressive voice but that also lets place to the instrumental part. Already known by the fans, the track quickly ends to let place to Ballcutter, which features Blakkheim (aka Anders Nyström, from Bloodbath and Katatonia), Peter Giles (Pombargia) and Simon Efemey (Absolute Power). If choirs in the screaming chorus disturbs you, just focus on riffs, that are Old School as fuck. It feels like we’re back in the nineties, with Swedish Death Metal influences.
Do you want more? Organ Snatcher is here to strengthen our beliefs: Cancer are loyal to their origins and their killer riffs that made their reputation. The speeding is perfectly accurate after the solo to come back on a dirty rhythm part, but you will be surprised by The Infocidal’s introduction. Whether drums are highlighted, the whole track comes back on the band’s Old School Thrash/Death as we love, and it’s impossible to not headbang on this track. Really impossible. Harmonics are obviously crazy and powerful, but let’s change a bit for Half Man Half Beast. Are you into heavy samples? Worrying ones. So you’ll be happy, because this track focuses on this kind of introduction to release the heaviest song of the whole record. No more, no less. And also features Raquel Walker (Liquid Graveyard) on some parts.
Should we go serious now? A catchy rhythm for Crimes So Vile, near from Slamming Death Metal, speed got Thou Shall Kill then Old School material, while Shadow Gripped focuses on old violence style, with this sound that newcomers can judge “too old”, but that I’ll never get rid of. Blast beat is literally the main thing that happened in the scene I discovered years ago, even if I obviously do not pretend to have listened everything from this period. The last song, Disposer, begins with this kind of atmospheric riff to end of a rhythm that I call call a heritage if Cancer wasn’t a legend.

While some just see the reborn of an old band with Shadow Gripped, I personally see with this record Cancer’s great comeback on international stages. Some festival announced, hype that never fades… Cancer is back, and they really want to prove it. If passion is here, music follows, and I am sure that their passion remains untouched. When will they play near from my hometown?