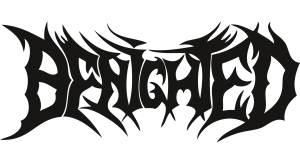 Benighted comes back for a breakthrough in the Death/Grind scene with Obscene Repressed, the band’s ninth album.

Created in 1998, the band trends to Black Metal before changing to what we know now. Regarding the line-up, Julien Truchan (vocals) is the only founding member still in the band, but he can rely on Pierre Arnoux (bass, Aabsinthe, ex-Winds of Torment), Emmanuel Dalle (guitar, Horgoth), Kévin Paradis (drums, Agressor, Mithridatic, ex-Svart Crown) and Fabien « Fack » Desgardins (guitar, Freitot, Infected Society, ex-Yrkoon) for the instrumental part. And something is telling me that there will be a bit more than just the band on this concept album (this dark topic featured on the interview with the band), of which artwork was realised by Grindesign… 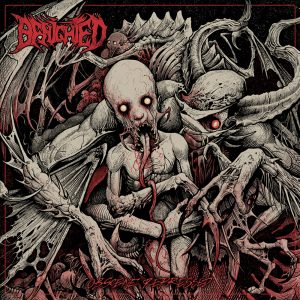 Let’s start with Obscene Repressed, the eponymous track. Some chewing noises as introduction, and quickly rage comes over after a visceral scream. Riffs are fasts, tough and vocals alternate between deep growl, pig squeal and scream with shouting choirs. Once this first slap is done, Nails is the next one. Once again, the infernal rhythm part strongly hits with groovy, heavy and violent elements. Tempo increases to an intense and pure-Grindcore moshpart, and sound slowly trample us. Don’t let Brutus’ soft introduction fool you, because this song in french is one of the goriest and unhealthy track that the band ever composed… On this furious rhythmic topped by choirs, the singer develops a story that make masters of horror pale in comparison. First collaboration of this album, Sebastian “Grimo” Grihm (Cytotoxin) lends his voice for a track that trends to Brutal Death/Slam with catchy and stirring parts called The Starving Beast. No dead calm, Smoke Through The Skull is next with its impressive energy and liveliness, without forgetting heavy parts and destructive blasts. If for you Brutal/Grind are distinctive styles, just listen to Hardcore elements that the band develops with Jamey Jasta (Hatebreed) on Implore the Negative, and you’ll be pleasantly surprised, even if you’re not really into this style as I am! A ball of pure energy on really powerful riffs! Let’s come back to raw Grindcore with the short Muzzle, a perfect track to make a crowd move. You’ll be surprised by the break part once again before being hit again!
A short well-deserved rest with Casual Piece of Meat’s introduction, the we unleash rhythmic. It’s sick and heavy, the sound is as sharp as greasy… Same observation for Scarecrow that combines both Grindcore fast-riffind and unchained Brutal Death heaviness including some groovy parts, the, going back to pure violence. The Old School aspect is exploited on Mom, I Love You The Wrong Way, an obviously unhealthy track that was recorded with Karsten « Jagger » Jäger (Disbelief, Morgoth). The blend of both aspects of Death Metal gives a result that is as filthy as violent, that perfectly fits to the band. Comeback on smashing Brutal Death with Undivided Dismemberment, once again a very short track that doesn’t hesitate to deploy the full power since the beginning to club the listener. Groove is also back with Bound To Facial Plague, a track with a massive bass sound that also provides an Old School vibe before a crushing break. Two bonus tracks also feature on the limited edition: The Rope, a heavy and sharp track that uses the most violent elements that the band is able to create, and Get This, a Slipknot cover. Of course, the american’s Nu Metal is far, and Benighted’s furious touch is present on this onslaught of power.

If there is one french band that embodies pure and raw violence, it is Benighted, and Obscene Repressed reminds us. The band get us accustomed to excellent material on lasts years, and obviously this record raises the level. About live performances, I experienced it several times and my advice is to go with your eyes closed!