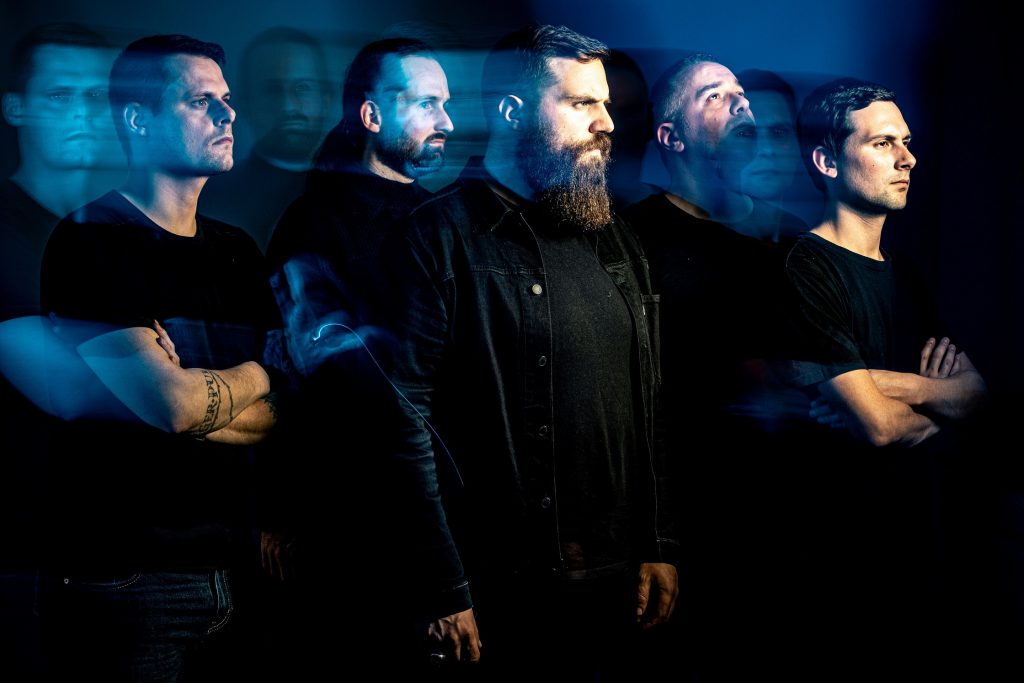 For the release of The Ascension, their first album, I had the opportunity to sat down with Pierre Lebaillif (vocals) and Régis Bernard (guitar) from Survival Zero. We talked about their musical universe, composition, but also the young french band’s goal.

Hello guys and thanks a lot for your time! Could you introduce yourself and the band please?
Pierre Lebaillif (vocals): Hello, thanks to you for your interest about Survival Zero. We’re a Metal band on the crossroads of several musical currents amongst the grooviest and the darkest ones. We are looking for offering a diversified and intense music, on both aspects energy we unleash and ambiences. Our roots can be found on 2000’s american scene on which we add Post-Hardcore atmospheres or Thrash Metal energy. We are all Metal activists in our area, Champagne. We five had near from twenty bands, in very different styles from Black Metal to Shoegaze or Hardcore. On the past, we sometimes played together in those bands, or just shared the stage together. We gathered to create Survival Zero and give birth to The Ascension, our first album. In this band, I am the singer.

Survival Zero was formed in 2019 and already release an album, how did you get to work together? How did The Ascension’s composition process happened?
Régis Bernard (guitar): Actually, Survival Zero was created by Pierre and Thibaut (Thibaut Gugger, drums) in 2018! The songs basis come from Pierre. Each member came after due to everyone’s availability, adding, each time, a personal touch and interpretation of the song.
Pierre: Between my initial proposals and the album’s songs, there is a huge gap. I should point out that I composed songs since years but I didn’t dare to let anyone hear them. Creating a band? No for sure! Thibaut had an attentive ear on my ideas and we started to jam together to create the project’s foundations. When members came into the band, it was an upgrade of it. We took our time too, totally isolating ourselves for more than two years, without playing shows, without communicating on a embryonic project. We wished to defend an artistic offer with solid basis.

Same questions about lyrics, can you tell me a bit more about themes you’re talking about and the way you wrote them, maybe the band’s message?
Pierre: The band doesn’t have a message to spread, it’s not our will. We’re just looking to convey emotions or feelings. It’s subjective, everyone can see its own message. But we obviously put a part of ourselves in music and lyrics. I try my best to make lyrics match to the feelings music brings to me. When we created the band, I was just out of an illness, called depression and it was very important to me to write words about it. I also wished to have texts as imaged as possible for everyone to have their own interpretations about it, their own feelings. If voice is an instrument, sentences and words are many effects we put on it. They can be impactful, fluent, drawn, jerky. When we sing (or even when we talk), we’re sculpting air. So I cannot write vocal lines without lyrics. I don’t have a specific method to write. A text can be out in a day, or a month. I can freeze for a long time on a part because I don’t like words or phrasing. The same thing between lyrics is that I pick inspiration in my reading. When I was writing for this album, I was reading Franz Kafka’s The Trial, Isaax Asimov’s Foundation and I was also reading again Denis Bajram’s Universal War One (that I read each year). 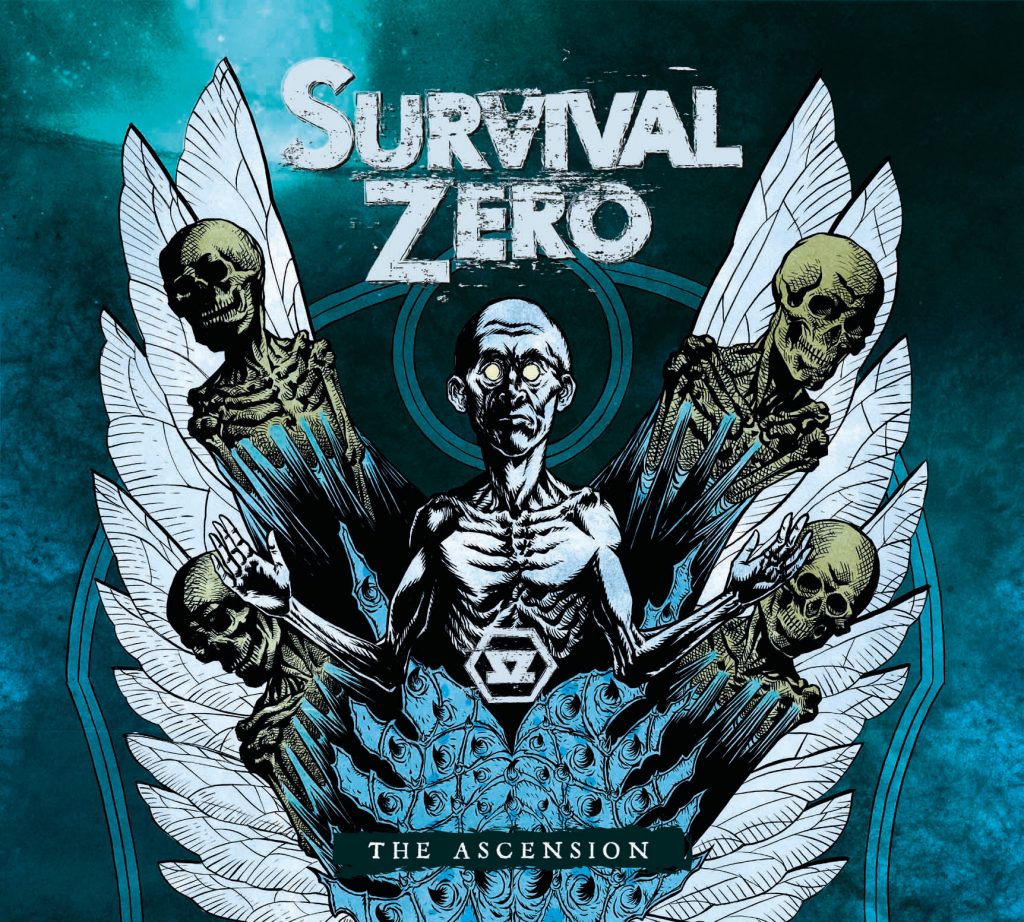 The album is about to be out, maybe the band is nervous, or are you feeling peaceful?
Régis: There is obviously some kind of apprehension when you spend this long to do your best to submit correctly your project. We’re also eager to share our music and know everyone’s feelings about it, despite the fact that we’re not able to defend this album on stage, for now.
Pierre: It’s obviously frustrating that everything happens in this peculiar context. It also adds to the apprehension we can feel at the eve of an album release. However we wished to keep the release date because listening to music isn’t incompatible with the situation. And let’s be honest, no one expect us, it wouldn’t have change many things in my opinion.

What about the contract with M&O Music, how did it happen?
Pierre: Really easily. When we had the album’s mastering we send it to several labels. Amongst those who answered positively we chose the one that offered conditions that matched the most with our wishes.

About your sound, there is Thrash Metal, Death Metal, but also some dissonant elements, Progressive and modern, which bands would you name as the band’s influences?
Régis: Survival Zero’s richness is precisely our influences’ eclecticism! Hardcore, Progressive Metal, Melodic Metal, Death Metal, Post-Rock to name a few… there’s a long list!
Pierre: I know that the 2000’s american scene has a huge influence on me. I’m a kid from this period. Amongst my bedside albums, there are Chimaira’s The Impossibility of Reason, or Lamb of God’s As the Palaces Burn, but I don’t only listen to those ones. According to my mood or times I can listen to as varied stuff as Sleep, Behemoth, Klone or Black Sabbath.

A video clip was released for the song Ascension, how did you work on this one? Why did you choose this song and not another?
Pierre: We would like our videoclips to be entrance doors to our music, and artworks as well. So we had to do a synthesis of several things: find a song that offers an overview of our music, adjust lyrics to the view and finally, even if it was more ancillary, turn the band into pictures. We worked with Olivier Gobert from Studio OG which is, in addition to be a super talented guy, a long friend of us. He listened to the track, I talked with him about lyrics and what I had in mind. We imagined a scenario about that, what he could think from his side about pictures, scenery, etc. We all come from Troyes, a city which medieval city center is full of architectural curiosities, and amongst others huge vaulted cellars like at Maison de l’Outil and Pensée Ouvrière, where we recorded the video clip. When Olivier showed us the place we couldn’t imagine to do it anywhere else. The place itself has this mystical aura we were looking to add to the clip. Finally, we needed someone to play the main character and it’s another friend, Paul Artaud who accepted. During the week before the shooting he sent me messages about his portrayal and when we did the shooting his involvement blow our mind. Adding his energy and Olivier’s one, it just bringed the idea we had of the video clip to an upper level. However we all get out of the shooting with bumps on our heads. The vaulted cellar is beautiful, but it’s also very low…

Some of you already had an experience with other formations, do you guys had an artistic residence or a first experience with an audience?
Régis: We all had several experiences with other bands. We had the opportunity to play our first gig shortly before containment, a lot more were scheduled, and also a residence at La Chapelle Argence in Troyes, but everything is postponed.

I know that it’s not easy to talk about future right now, mainly due to the actual situation related to Covid-19, but do you already have plans for the future? Live, video clips, composition…
Regis: Focusing back on touring again as soon as it’s possible! And we also take advantages of this break to sharpen new compositions, of course.
Pierre: As Régis said, our main focus will be playing on stage. Otherwise, we are also thinking about more video clips for this album. We will see.

What was the very first Metal song you listened to?
Régis: Metallica’s Enter Sandman, I was 12 years old when it was released, I must have discover at 13 years old, I had bought the tape at the local record store!
Pierre: Slipknot’s Left Behind, I must have been 13 or 14 years old. At this moment, I was digging Rap music, and a friend made me listen to this. I didn’t like it the first time, but I was intrigued enough to come back to it.

Since when do you play with your instrument? Do you remember the track that made you want to begin playing? Do you earn enough money with music, or do you have another job aside?
Régis: I occasionally play bass since 25 years and regularly guitar since 22 years.
Pierre: All of us have a full time job beside of the band. Music is like an overflow valve. Personally, I began to improvise myself as a singer few times after discovering Slipknot. This band led me to things that left me flabbergasted like Death Metal I work on my voice since 15 years or somewhat, but it’s since 2013 that I decided to have singing lessons to improve my voice.

What is your best and your worst memory with the band?
Régis: The best one: our album’s first listening session. Bad memory: there is not really a bad memory, maybe this afternoon in rehearsal after everybody ate a kebab full of cabbage and onions…
Pierre: I’ll join Régis’ opinion on the best memory. It was just a validation of months of work. For the worst one, I wasn’t here for this rehearsal… hopefully! So I’d say the moment I explained the band’s idea to Thibaut, Pierre (Pierre Touzanne, bass), Régis and Ben (Benoit Raguin, guitar). Those ones are not really bad memories, but it was really stressful.

Last question, I let you create a tour on which Survival Zero are openers. You can choose three bands!
Régis: Survival Zero / Lamb of God / Gojira (thanks for making me imagine this tour!)
Pierre: I was taken short by Régis! I’d have say the same one. Otherwise I would like a tour with friends to happen: Survival Zero / W.I.L.D / Decifiency. We would have such a good time.

Once again thanks for your time, lasts words are yours!
The band: Thanks to you for your questions and the interest you gave to Survival Zero. Many thanks to you who just read this interview.