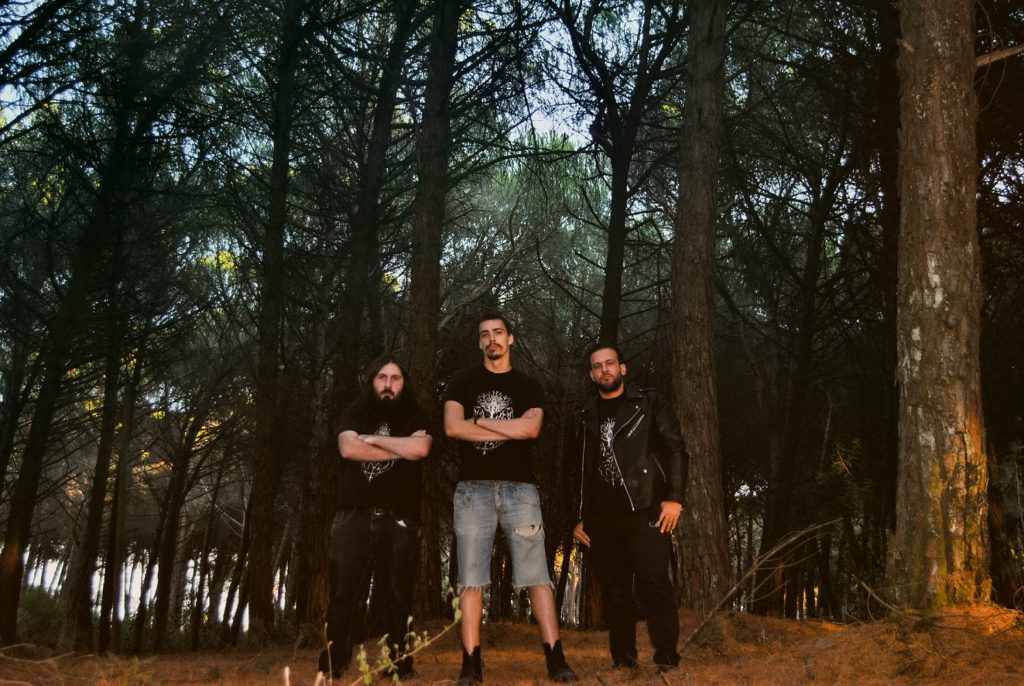 Discovering bands is probably one of the most interesting things ever. Now please welcome Daemon Forest, Black Metal band from Portugal.

Hello and thank you for your time. Would you mind introduce yourself and Daemon Forest with your own words? How did you find the band’s name?
Daemon Forest: Thank you for the interview and for all the attention given to our project. The band’s name was somewhat of a spontaneous one. It kinda “just appeared”. Though initially we weren’t sure what kind of music we would do at the beginning, since we saw that the band was going for a more Black Metal approach, Sharkuel (drums/synth) suggested the name to change from Demon Forest to Daemon Forest, since “daemon” represents both a divinity or supernatural being of a nature between gods and humans, and also, is the archaic spelling of the word demon.

Daemon Forest was created in 2016 but already released an EP, a full-length and lastly a demo called Lisbon Pogrom 1506. How does the composition process happened? Was it different than at the band’s creation?
Daemon Forest: The EP was mainly our identity discovery. The Dissonant Walk EP was mainly us making black metal. Sing about satanic themes, and all that. At the time, we were heavily influenced by projects like Deathspell Omega and Leviathan, and I believe that reflects on the sound the EP has.
It was when we started to compose for the album that our “plan” was set. We decided to embrace pure aggression towards religious fanatism, and at the time there was a huge cover up of child molesting cases within the Catholic Church. Azazel and Sharkuel decided to do something more attached to their human side, as to link mental health to religious fanatism/convenience, both from the persecuted, and their persecutors alike.

What is the story behind Lisbon Pogrom 1506?
Daemon Forest: Lisbon Pogrom 1506 is a very sensitive case. It is a very dark episode in the Portuguese history, where the Jew community that didn’t accepted the love of Jesus Christ were engulfed on the flames of the Church, burned alive in plain sight, to set an example to anyone who would think to challenge the Church at the time. Just another consequence of religious fanatism, that uses violence to assert dominance over the commoners at the time.
Ironically, it isn’t all that mentioned at all in the history books, and we have only a small monument that serves as homage to that tragic event (the cover of the demo itself). We decided to do our own homage and challenge the Portuguese Church (that has a strong political presence) while we are at it. 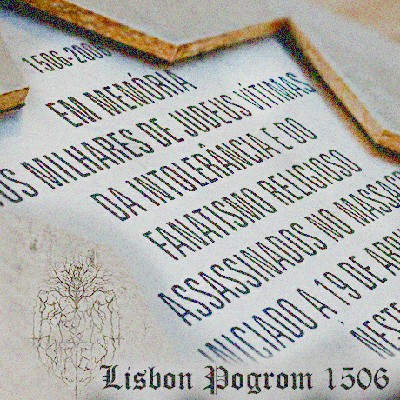 When I listen to your music, I immediately feel a dark, oppressive and mysterious ambience, how does inspire you to create a mix between Raw Black Metal and those Ambient/Experimental sounds?
Daemon Forest: The fact that it complements each other and reinforces the message of the songs. We are approaching some deep dark and oppressing themes, so such mix is quite fitting. Also, Sharkuel just likes to do sound design and experiment with sounds overall, so that’s his main thing after playing drums on the band, and overall sound engineer.

Which bands or universes could you quote as the band’s main inspirations?
Daemon Forest: As referenced before, Leviathan and Deathspell Omega were the main influences that made us find our own identity. Other more ambient related bands like Blut Aus Nord, or the violence present in Watain and Archgoat has helped inspire us to build upon our own sound, and do what we are doing at the moment. Currently, we are also checking some folk-inspired music from more exotic places in the world as well.
The movies The Stoning of Soraya M. ( .?????? ???? ?), The Boys of St. Vincent, Obediencia Perfecta, Bad Education, and some documentaries like Sex Crimes and the Vatican are some major fuel for inspiration as well.
Also, Sharkuel digs H.P. Lovecraft.

You guys come from Portugal, a country that we mainly know about thanks to Moonspell, Infernal Kingdom and more recently Gaerea. What can you tell us about the Metal scene here?
Daemon Forest: Unfortunately, it is a scene that doesn’t support us. Don’t take me wrong, Moonspell were nobodies until they went abroad and recorded Wolfheart in Germany. Now they are loved by everyone and regarded “as the best Portuguese band ever”, just because they are famous abroad. The same was for Gaerea and we have many cool bands like Hyubris, Tod Huetet Uebel, the Firstborn, Filii Nigrantium Infernalium, etc etc, don’t have the recognition they deserve, and they go pretty much under the radar. There is a noticeable lack of support here, and the fact that some metal acts here are mostly made up of closed circle of friends, new bands here have a real hard time. It made us almost quit, to be honest here, but when we released the self-titled album, and saw that our music was appreciated abroad, it gave us a new strength and cleared our sights.
Just for reference, the Portuguese metalhead in general believe that local bands who aren’t famous, or have some form of status/connection, should not charge so much money for their gigs, sometimes 3-4 bands play on a small venue, with tickets costing between 10€ to 20€, if not less, but are no strangers when Metallica or Iron Maiden come into town and they pay up 75€ to 120€. Nothing against these bands, don’t get me wrong, but these same dudes, who pay these large amounts for big bands, go to see concerts for free because “they know someone from some band/organization”, and then come to social media brag how they “support the underground”. That and organizers who wants to pay us with free dinners and booze, instead of paying a cachet, because hey, bands who aren’t famous aren’t entitled to receive money, just exposure, even though they charge tickets and overpriced drinks. This is the type of “support” we have here.
This may sound we are just condescending, but it is a fact that people don’t like to discuss. And I believe if someone from Portugal ever reads this, they will say that we are full of ourselves, we are jealous, and all that “positive criticism” they love to share.

I know that Covid-19 fucked up a lot of things, but how did you deal with it as a musician? Does it also affect your personal life?
Daemon Forest: It indeed did. We didn’t manage to meet for months due to the lock down. We didn’t had time to record an EP, and thus released Lisbon Pogrom as a demo, so that people could see that we were active. And other things, like our personal jobs, health issues, etc. These are weird times, and we are assisting to some major social decline here. People aren’t careful, and we have people dying out there. We are slowly getting back on our feet, and full of energy to spare.

Do you have plans for the future you can already tell us? Like more music, live shows?
Daemon Forest: We are aiming to finish the Lisbon Pogrom EP, and release the remaining tracks this year. Also, if Covid-19 allows, we will play on the Blackland Festival, in Germany, on the 2nd of October.

About live shows, what can we expect about Daemon Forest on stage?
Daemon Forest: You will be able to see 3 guys, one doing bassy sounds, the other hitting stuff, and a third just shredding a guitar and screaming like a madman. Ahaha.
On a serious note, you will be greeted with a similar atmosphere to our recorded music. The same energy, the same intensity, the same sound design. Three individuals, sharing a message through extreme music, to anyone that is eager to listen to what we have to offer.

Is there a meal you could associate the band’s music to? Could you tell us the recipe and why?
Daemon Forest: A tuna steak “a Lagareiro”. Crispy on the outside, and meaty/juicy on the inside. Just grab a slab of tuna meat, salt, olive oil, pepper, garlic, thyme and lemon/vinegar. Put it on a frying pan and fry the steak on the olive oil until you have the steak light brown. Serve it hot, and eat it while it still “bleeds”.

Last question: imagine you can create a tour with Daemon Forest as openers and three other bands. Who would you pick?
Daemon Forest: Since we three have distinctive tastes, we will reply one at a time:
Azazel: Gorgoroth, Archgoat, Impaled Nazarene
Sharkuel: Mayhem, Dodheimsgard, Anaal Nathrakh
Gadreel: Venom, Darkthrone, Celtic Frost

Thanks again for your time, and for your music! Maybe you have some last words to conclude the interview?
Daemon Forest: Yes, I believe each one of us has something to say.
Sharkuel: This may sound as cheesy as ever, but everyone who read this interview, just believe on yourselves. You can achieve whatever, just put your mind into it. If someone come and says that you aren’t worth it, just do better, and show that someone who is wrong. We have the power to change our lives, sometimes it comes with time, sometimes you are lucky and it is immediate, but never ever let naysayers bring you down, most of them just are envious of one’s achievements, and just want to bring us to their level, and you are better than that.
Azazel: As my brother Sharkuel said always believe in yourselves and never listen to the people who try to put you down and your ideas down, always be truthful to yourself. Never stop believe in yourself even if the things you done, don’t fit with the standards of the modern society.
Gadreel: As my mates said and carry this message to music, to everyone who read this interview, we ask you to truly support the underground. Not just us, but all the musicians in this scene. We all know that we have to and we can always learn, improve our compositions and our music, but to do that, all the support is important for that to happen. Not only live shows, but also through the purchase of merchandise, through the following of the artists and their work and through feedback that makes us grow and become better and most effective in the message we want to convey.

Daemon Forest: We thank you once again for the interview and we disengage you from all readings an excellent day and to stay safe and healthy.