Do you need to move your head on heavy sound? South Of No North is made for you.

Created in Italy in 2016 by Giulio Mirabella (vocals, Abyss of Decay), Roberto Tarallo (guitar/bass) and Ciro Troisi (drums) gave their best for Phagocity, their first album. 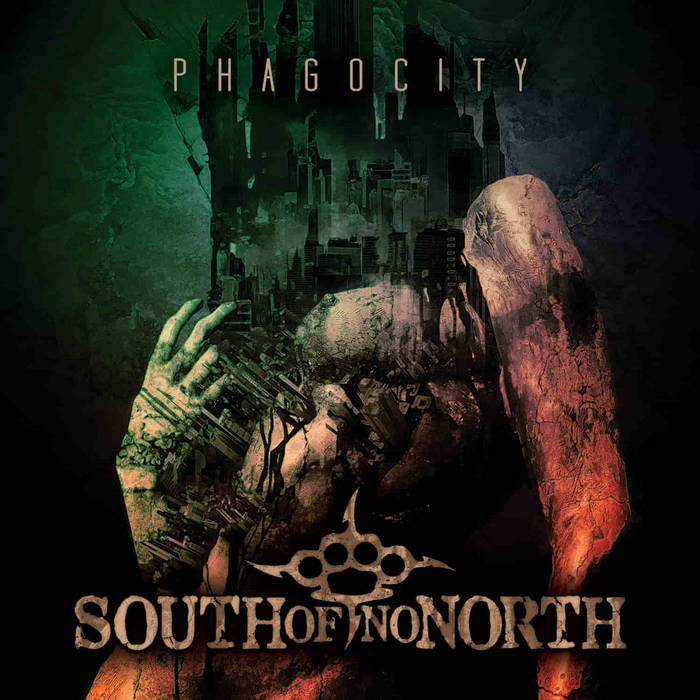 It is a strange and nearly worrying introduction, with this sampled voice, that makes enter in the band’s universe, between Groove and Death Metal. Screams are as massive as the rhythmic is catchy, and those few harmonics give it an aggressive aspect. We sometimes find some hints of clean soaring vocals, but it is a heavy, restless and visceral sound that dominates and that the members unleash at every moment. We also notice this moshpart at the end of Nonceferatu, but also I.N.O.F.Y.C.M.’s velocity. Inimical and Cinder are stabbing, but allows the band to catch us before striking their riffs, just like the powerful and original Indie Ass. The short Decapitalism offers a greasy part before Command, that picks into a Thrash Metal with vivid harmonics that reminds me Hail Seitan, then we go for Back In Black’s snoring bass. The song has nothing to do with the mythical Hard Rock band’s song, but the Italian’s energy is contagious! We come close to the end od the record with Klaatu Barada Nikto, that offers a worrying sound before smashing us with dissonant riffs and pure energy prior to (DISC OHM 4TH), a final between Electro, dissonance and oppression.

For their first full-length, South Of No North strikes hard. Their massive and catchy sound makes Phagocity an interesting album that you can easily listen. In my opinion, their live shows will be energetic!