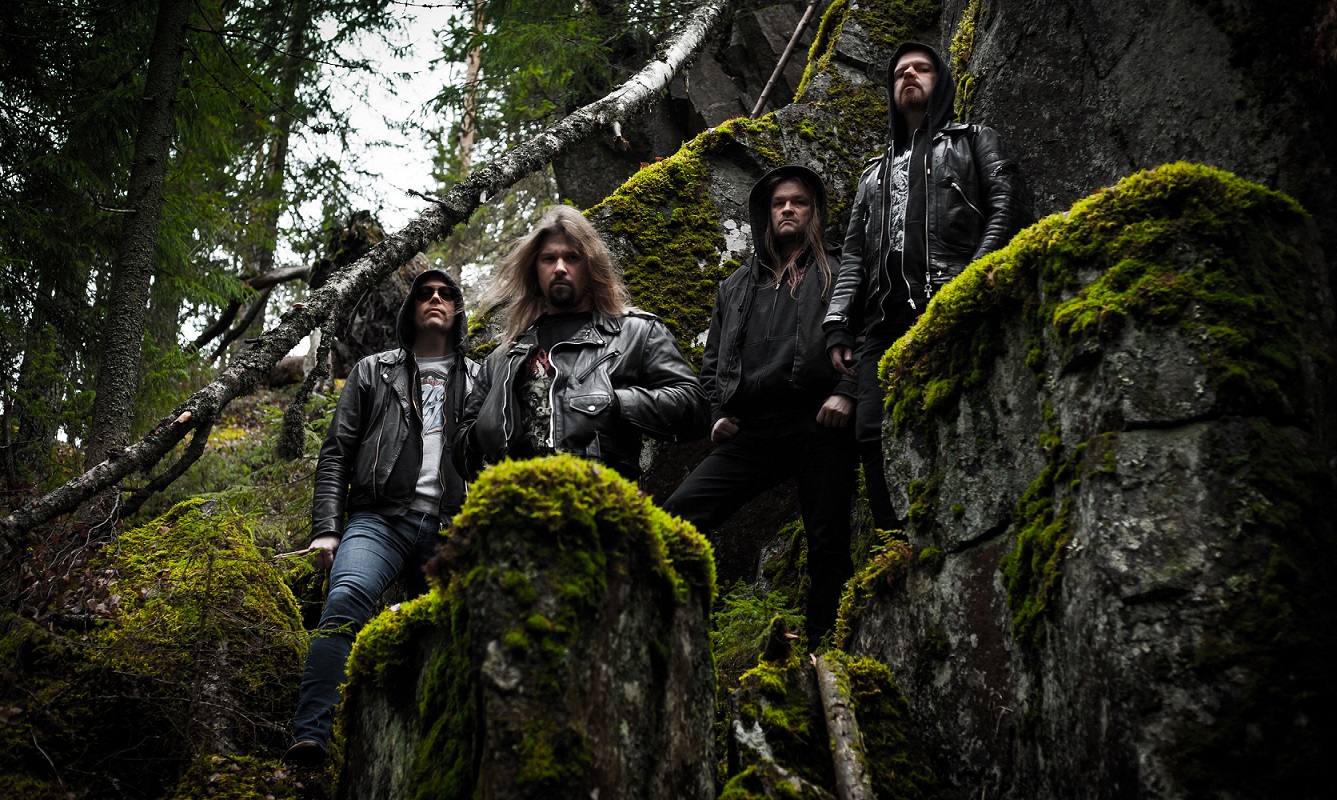 Lasse Pyykkö, Hooded Menace’s founding member as well as guitarist and bassist answered my questions about the release of The Tritonus Bell, the band’s sixth album.

Hello and first of all, thank you very much for your time. Would you mind introducing yourself and the band Hooded Menace please?
Lasse Pyykkö (guitar/bass): I’m Lasse, the guitar player in Hooded Menace, a Death/Doom Metal band from Finland formed in 2007. We’ve released albums on Doomentia, Profound Lore, Relapse, Season of Mist, and toured USA and Europe, and performed at many major metal festivals such as Hellfest, Maryland Deathfest, Tuska, Party San Open Air, Roadburn…

How did you pick the name Hooded Menace back in time?
Lasse: There were a couple of options with references to the Blind Dead movies, and Hooded Menace sounded the best. In fact, it’s not that great name at all if you don’t recognise the reference.

The Tritonus Bell, your sixth album, is about to be released, how do you feel about it? How does the composition process happen?
Lasse: We are super-excited about it. It turned out really good. Songwriting can get a little harder album after album, but the songs for The Tritonus Bell came together rather painless after all. We widened our sound a bit, and the fresher influences boosted the inspiration, I guess – we had a deeper source where we draw from, so to speak.

Where does the name of the album come from? What about the artwork? How did you work with the artist and what is the link with your music?
Lasse: The cover art spawned the album title. We prefer not to explain our album titles or lyrics too much, but rather leave it up for people to come up with their own interpretations. The less we explain the more explanations there are, and we like it like that. Everyone can have their own “truth”. We’ve been wanting to work with Wes Benscoter, and it turned out that he was feeling the same way about us. The stuff he has done with Autopsy is awesome, to mention just one of the many bands he’s worked with. He’s also done art for horror movie releases, the fact that only increased our interest to work with him. We couldn’t be much happier with the results.

The first song you revealed is Blood Ornaments, why did you pick this one?
Lasse: We chose it as a lead single because it introduces the newer influences perhaps better than any other album track would do, plus it’s also my personal favourite off the new record.

In your songs, I always notice a heavy and hooking rhythmic combined with epic and piercing leads. How do you reach such a blending of effective sound?
Lasse: Very difficult to say. The songwriting process is a mix of experience, inspiration and intuition.

To me, the song Those Who Absorb The Night is one of the most worrying tracks. How do you think of the ambience of a song?
Lasse: Those Who Absorb the Night has quite a melancholic atmosphere, but then again there are some rather head-bangable parts to complete the more atmospheric sections. In fact, I think it’s the most accessible song on the album.

The bonus track is a cover of a WASP song called The Torture Never Stops, what led you to choose this one?
Lasse: I suppose we wanted to underline the 80´s Heavy Metal influence of the album by covering an 80´s Metal band. WASP is a collective favourite in Hooded Menace camp, so we didn’t really have to argue about it. WASP’s debut album is one of my first Heavy Metal LP´s, if not the first, so for me personally, covering one of their tracks was a great way to pay a tribute, so to speak. The original vocals aren’t too melodic and the song has that killer riff, so the track translated quite well, I think.

As a musician myself (I’m a bass player myself), I’m really interested to know what gear you used to record this album. Was it different from the previous ones?
Lasse: As for the guitars and amps/cabs it was a little different than the last time. This time, as well as the last time actually, I used one of my Charvel Model 2 guitars loaded with DiMarzio Super Distortion humbucker, and Teemu played Bare Knuckle loaded Gibson SG. Both guitars were run through Marshall JVM with Andy LaRocque’s 1987 custom cab with 4×12 Celestial Vintage 30´s. As for the bass tracks I used Teemu’s Fender Precision. I don’t even remember what the rig was. Pekka played his old Pearl drum set with some Evans heads. This much I can tell.

Covid-19 fucked a lot of things up since last year, how did you manage to deal with the situation as a band? Does the crisis have any impact on The Tritonus Bell?
Lasse: Sure we saw our European tour and some other gigs flushed down the toilet, but otherwise the pandemic didn’t have music impact on us as a band. It definitely lowered our enthusiasm to travel to Sweden for the mix. But then again, most probably we would have attended only if there was a big problem or something. This is how we worked on our previous album as well.

Even if the future is still full of doubts, do you have some plans for the band’s future you can tell us?
Lasse: No.

What can you tell us about your collaboration with Season of Mist?
Lasse: It’s been good. I don’t believe there is such thing as a perfect label, but things have been pretty smooth with Season of Mist. This is actually our last album in the contract, so it’ll be interesting to see what the future will bring. 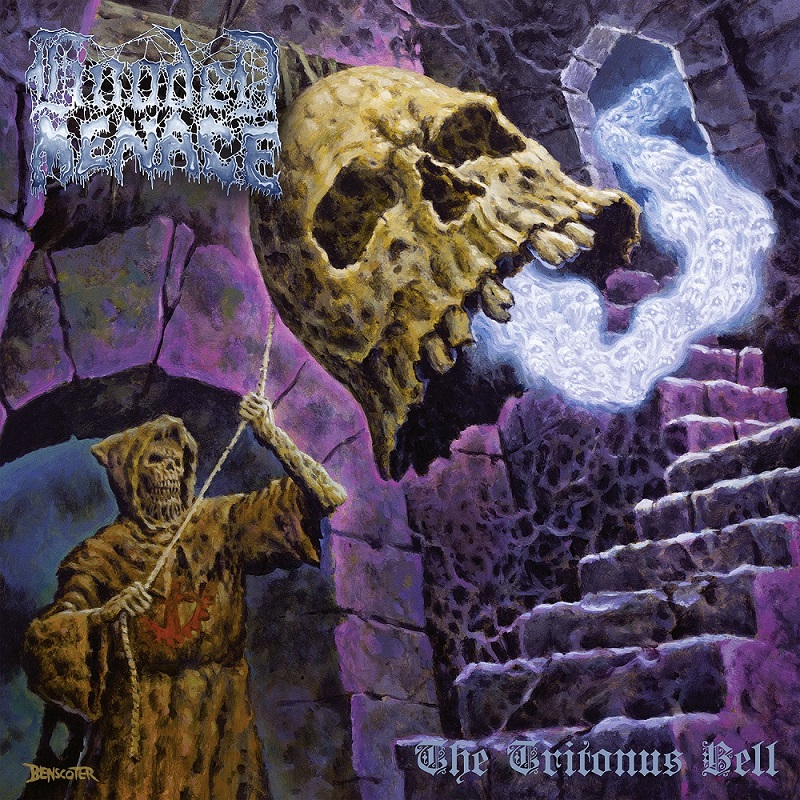 I know that Finland, your home country, is a land of Metal, but what can you tell us about the Metal scene from your point of view? From huge bands to very underground stuff.
Lasse: I don’t follow the scene too much, but yeah, there are so many metal bands in Finland –  it’s crazy! I don’t care too much about the “huge” bands, but in the underground there are jewels like Morbific.

What was your first Metal album? Bought by yourself or offered by someone. What led you to the Death Metal universe?
Lasse: The first one was the debut LP of WASP, or Destroyer and Dressed to Kill by Kiss. I remember I got those two Kiss albums at once. The transition from Heavy Metal to Death Metal was the usual story: In the 80’s I got into Heavy Metal, bands such as Accept, Ozzy, Maiden etc., and then discovered harder stuff like Metallica and Slayer, which quite naturally led to Death Metal like Death and Morbid Angel, and all that.

What do you love about your music that you cannot find in other band’s music?
Lasse: It’ll be very hard to answer to this without sounding like a prick (laughs)! Well, I like the balance of Doom and Death Metal in our music, and now with the added 80’s Heavy Metal vibes the music is quite interesting as a whole. I also like the fact that we never play really fast, you know like Slayer fast, not to mention blast-beats…. Most Death/Doom bands tend to do that while we’ve consciously stayed away from it since the day one.

Do you have hobbies aside from music? Do you also have a job, or does your music income allow you to live?
Lasse: I’d rather not talk about our personal lives. In a perfect world we could live off from music (laughs), but as everyone knows, this world is far from perfect.

What is your best and your worst experience as a musician ever?
Lasse: Best: Getting The Tritonus Bell ready for a release. Yes indeed, I am that excited about this album, really! Worst: Some certain live shows.

Maybe you already heard about the french Metal scene? Which french bands do you know?
Lasse: Trust! Of course I know Gojira, but it’s not my cup of tea at all. Sortilège is great though! What else I know, uumm… Loudblast, Agressor, Monarch, Deathspell Omega, and Alcest come to mind.

What if I ask you to compare Hooded Menace’s music with a finnish dish? Which one and why?
Lasse: Mämmi. It looks like shit, but if you add some cream, it might surprise you.

Last question: which bands would you love to tour with? I let you create a tour with Hooded Menace and three other bands!
Lasse: None (laughs)! I’m not interested in playing live anymore, but never say never. Maybe if you can bring back Ozzy Osbourne with Jake E Lee on their Bark at the Moon tour we could consider it! And let’s have Iron Maiden and Judas Priest during their 80’s heydays play too. It would make me wonder what the hell we are doing here!? But since you asked…

That was the last question for me! Thanks a lot for your time, last words are yours!
Lasse: Thank you for the interview! Keep your eyes peeled for The Tritonus Bell out on Season of Mist in August!