Created in 2005 in Sweden, the band has drawn attention since its first EP in 2009. After an album in 2011 and an EP in 2013, the band stays into the darkness. 2018 marks their comeback, but it is only in 2021 that Daniel Bergström (guitar), Calle Thomer (guitar, Humanity’s Last Breath), Vilhem Bladin (vocals) and Buster Odeholm (drums, Humanity’s Last Breath) unveil us the release of masstaden under vatten. 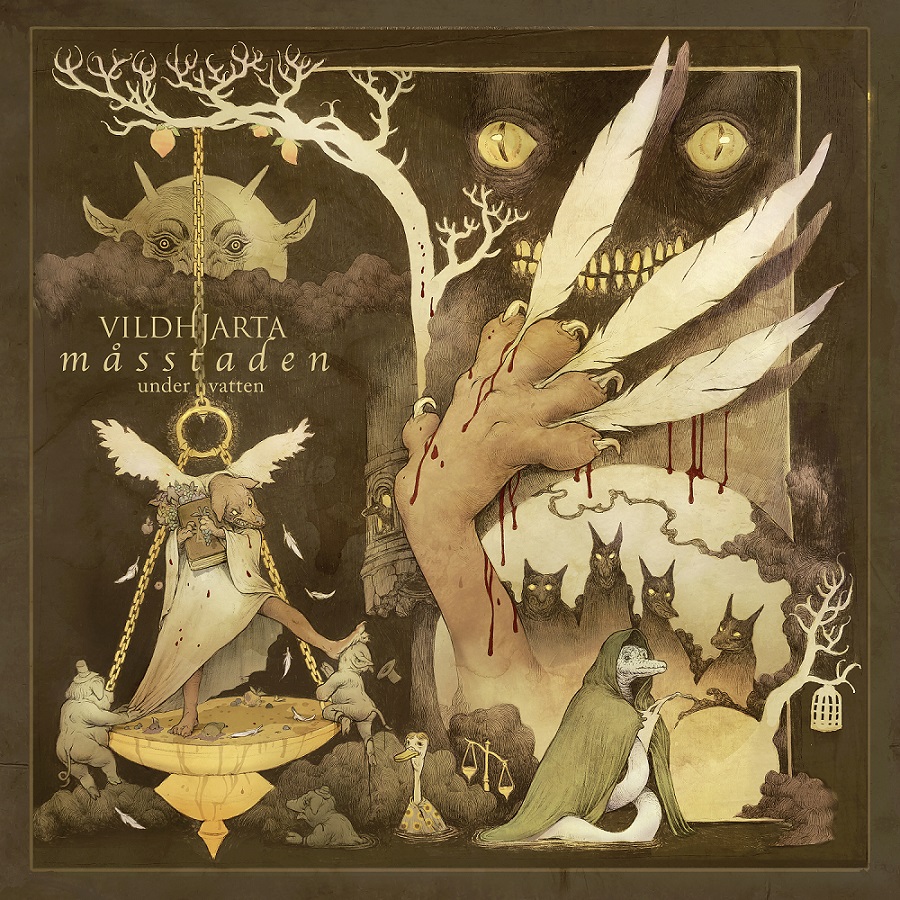 During more than an hour, the band will spread its super effective Djent, composed of an impressive blackness, complex patterns and above all jerky heaviness. We begin with the oppressive lavender haze, an instrumental track that stays dark even during the mesmerizing clean part, quickly joined by strength. när de du älskar kommer tillbaka från de döda introduces those massive howlings on as dark as seizing riffs which go from raw energy to oniric parts. Keyboards in the background offer a mystical ambience, while kaos2 plays once again on a dark groove with low tuning. Once again, airy harmonics create a heady contrast, then toxin come back to break quietness with a lumbering heaviness, supported by an oppressive ambience, but also some clean vocal parts to walk with howlings. Technical elements surface again, like on brännmärkt and its Prog influences. The song can create epileptic moshparts or a suffocating ambience, or even melting both together, then melancholy strikes on den helige anden (under vatten) and its haunting rhythmic. The song sometimes becomes more raw, but melodies are still here, just like on mysterious passage noir and its exhilarating notes. The final keeps this explosive heaviness, then måsstadens nationalsång (under vatten) shrouds us again into a whirlwind of blackness and mystical sonorities, welcoming sharp and dissonant riffs.
Vocals surface again on heartsmear, a song that will probably be responsible of so much pain in the neck, while offering technicality and quietness, then the band develops anguish on vagabond, the next track. Heady melodies accompany howlings, massive riffs and clean vocals before an instrumental part, then mitt trötta hjarta hooks us with an as surprising as contrasted sound. No transition is needed to melt all elements, just like with detta drömmars sköte en slöja till ormars näste, a song that highlights oppression and heaviness, whether there is saturation or not. We can think quietness comes back on phantom assassin, but aggressive elements are still here, hidden in the shadows and waiting for their time to come, offering a coherent transition with dissonance on sunset sunrise. After a very energetic beginning, the sound breaks, then shards of rage come to us again under this melodic calmness, that once again get destroyed with the complex sunset sunrise sunset sunrise. The sound is permanently heavy and haunting, sometimes allowing mystical, nearly worrying parts to come, before the energetic penny royal poison. The song is somehow majestic, but also disturbing, then paaradiso comes to close the album with ten minutes of as complex, unpredictable, heady and stunning sound.

If you know Vildhjarta, you know what kind of madness to expect. But if the band is still unknown for you, you will enter with masstaden under vatten into a very long maze of complexity, heaviness and intense blackness it is hard to match, or even understand.