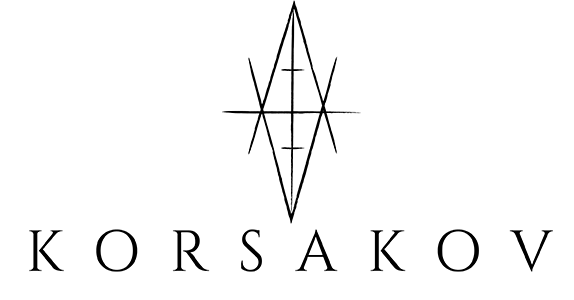 We know almost nothing from Korsakov.

Created in the north of France by A (instruments/arrangements) and E (vocals/arrangements), the band relies its first album, entitled pogruzhat (”immerse » in russian), on the syndrome discovered by the russian neuropsychiatrist Sergei Korsakoff at the end of the nineteenth century and Post-Black Metal.

Six songs soberly named from I to VI which explore the dark and tortured universe. The first song offers a short weighing intro before unveiling dissonant and massive riffs, then vocals come to haunt the rhythmic. We hear the sound slows down to become weighing, then more Old School influences come to be integrated to riffs before the short second song, which shrouds us into an unfathomable fog, from where some worrying tones come. The third song is the longest one, and it immediately offers a raw riff which gives birth to this intense and impressive rhythmic. It will calm down to allow ghostly and airy riffs before it totally ceases. Some clean-sounding harmonics take over, then vocals come back in the background to invoke the majestic rhythmic, which gets consumed while offering its beauty until the fourth song’s softness comes to surprise us. We feel blackness awaits its time in silence, and it’s with the fifth song that it awakes from its slumber to offer a thick, fast and penetrating sound. The rhythmic slows down and becomes haunting, then it bursts into fire again and wears dissonant, heady and ice-cold harmonics before brusquely ending to let its place to the sixth song, made of powerful, deep and intense tones. Howlings alight on this burning rhythmic, which suddenly lets a sampled voice walk with some airy notes, which fly above a tortured basis.

Korsakov’s intensity is only equaled by its mysterious voice. The sound of pogruzhat is dark, deep, haunting and sincere, slowly creating a weighing and majesting ambience that shrouds and mesmerizes us.