Twenty years and a new album for Cutterred Flesh.

Created in 2001 in Czechia, the band led by Vitalij V. Novák (guitar/vocals, I Warned You, Pandemia) is completed by Zdenek (bass) and David (guitar) since 2011, but also by Frantic (drums, I Warned You) and Jirka Krš (vocals, Pandemia, Casage) since 2018. They release Sharing Is Caring, their fifth album. 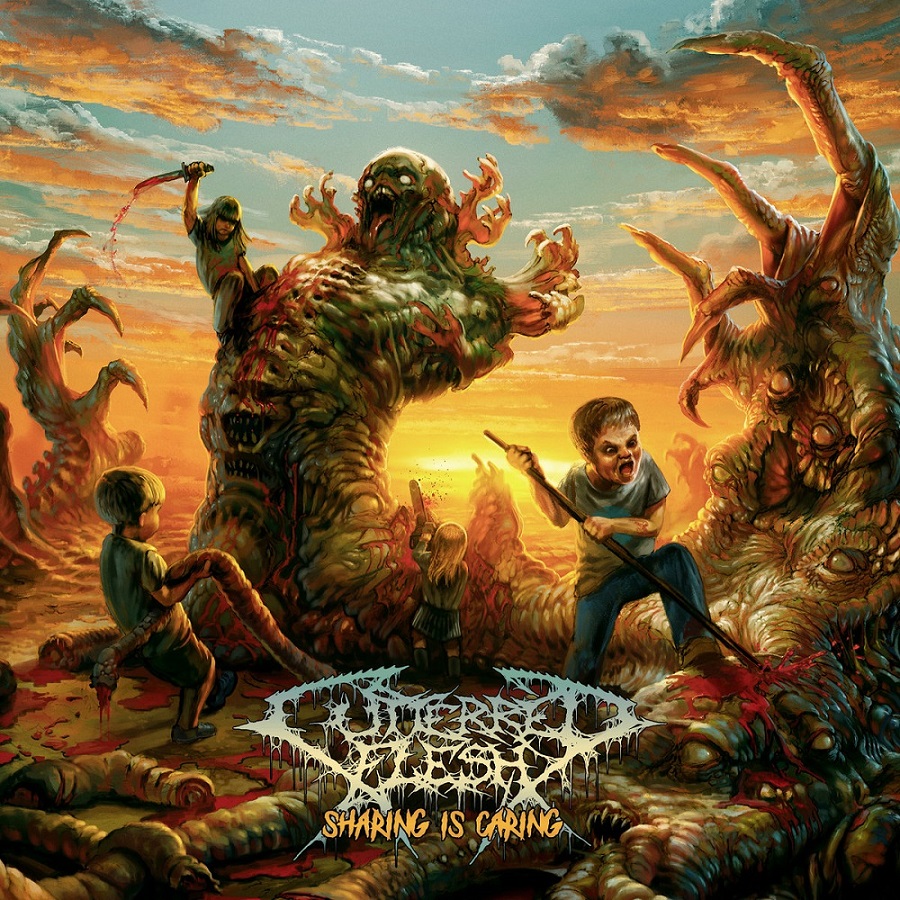 Vibrio Vulnificus immediately unveil us the violence evoked by the artwork signed by Pär Olofsson (Abominable Putridity, Aborted, Immolation, Pathology…) with dissonant and aggressive riffs, but also piercing leads and massive howlings. Old School accents slip into the raw mass, then Black Aurora unveils an introductive lullaby, then melancholic and dark melodies that alight on a thick basis, interrupted by suffocating parts, while Where Only Old Flesh Stinks introduce dissonant and quiet riffs before rage surfaces. It increases before drawing from Brutal Death to develop crushing and raw parts, then Good Boy – Romantic Relationship with Necrotic Tissue offers a greasy and massive sound, as well as a hooking groove. The song is effective and very consistent, like The Mystery of the Black Hen which offers edged harmonics to temper pure violence. Some catchy patterns are included to this heavy sound, then Amused by the Tenacity of a Dying Whore comes next with sharpened melodies and some technicality. The song is also very effective and multiplies influences, like Knife Is Not The Enemy which melts complex riffs with a raw sound and a blast that sometimes turns into a double kick steamroller. The band can also play with groovy and effective parts, then dark sonorities appear before My Favorite Bodybag, a quite Old School track. Riffs can be thick or really sharp while being still extremely effective, while Progressive Body Adjustment, the bonus track, melts effectiveness, violence and technicality hints to close this album with heaviness and super powerful Brutal Death influences.

We have every shade of Death Metal with Cutterred Flesh. On Sharing is Caring, the band melts pure brutality to piercing melodies, raw howlings to dissonant elements and technicality to effective groove.