To melt as many different styles with offsets artworks, there’s no one but Japan. Created in 2010, Undead Corporation is an as wacky as efficient band.

It is currently composed of Akemi and Dougen Kubota on vocals, Jinya and Pinetree on guitar, Sachou on bass and the last one to join YU-TO on drums, who replaced Morishita Fuminya when he left on the beginning of 2017. The band mainly creates musical doujins (kind of amateur creations) that they gather into mini-CD or EP, before releasing their first full-length in 2013. While the third one was released recently, we will come back to Shinsoku, the second one released in 2014. Do you see Symphonic Death Metal concept? So you’ll add a huge blast of powerful rhythm part, and a tremendous Melodic Death Metal influence. Are you okay? Perfect. 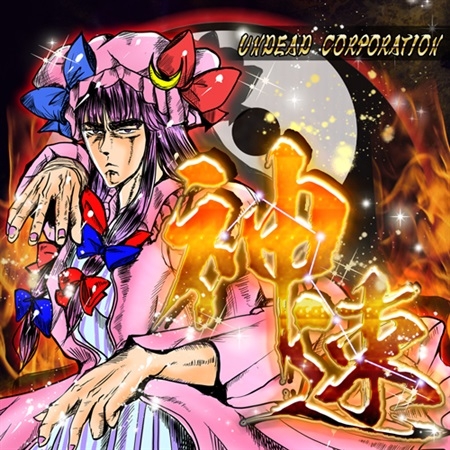 No need for introduction, Megalomania starts instantly, and all I can say is that it’s fast and massive. Mixing isn’t perfect, but technicity is. Lyric vocals are surprising on this part of violence, but growl comes over to harmonise, and the final duo is wonderful. Keyboard leads us to Fairy Dance, a quieter track that clearly undertakes its Symphonic Metal basis as much as its Melodic Death Metal/Metalcore rhythm part. The solo that occurs before the end let us feel that the japanese are highly influenced by Swedish Death Metal, but Malicious Maggots has nothing more to deal with delicacy and softness. Violent riffs combines to pig squeal and growl to come back on worked lead guitar parts, but that also keep this violent aspect.
Frightening tones introduce Ghost In Starlight that quickly explodes with a jerky rhythm part and skilfully includes symphonic keyboard parts, while the sound is one of the record’s heaviest one. Another super fast unfurling wave, Behind The Wonderland is a bit more worked that the other compositions. The universe plays a bit more on immersive ambient, and the voice diversity can make us think about kind of theater play or opera on an epic music background. The Wrath reconnects with the purest violence through greasy and imposant riffs, with a massively important bass.

The last track, Belial Drive kick starts for a composition that faithfully follows the band’s main guidance : huge rhythm part, inhuman screams and soft keyboards touch, followed by a beautiful clean voice for a breathtaking contrast. On limited editions, other tracks are “screamless” versions, which means with less screams or with a different mix, but that fits to the band’s universe and ambients that they gather.

Immersed in a strongly contrasted universe and a powerful identity, Undead Corporation somehow draws attention. Compositions are original and exploits every influence. This zombie band are just playing some shows in Japan, but they are all impressive, and they have a very good reputation. I hope that with the new album release, Europe will be on their way…