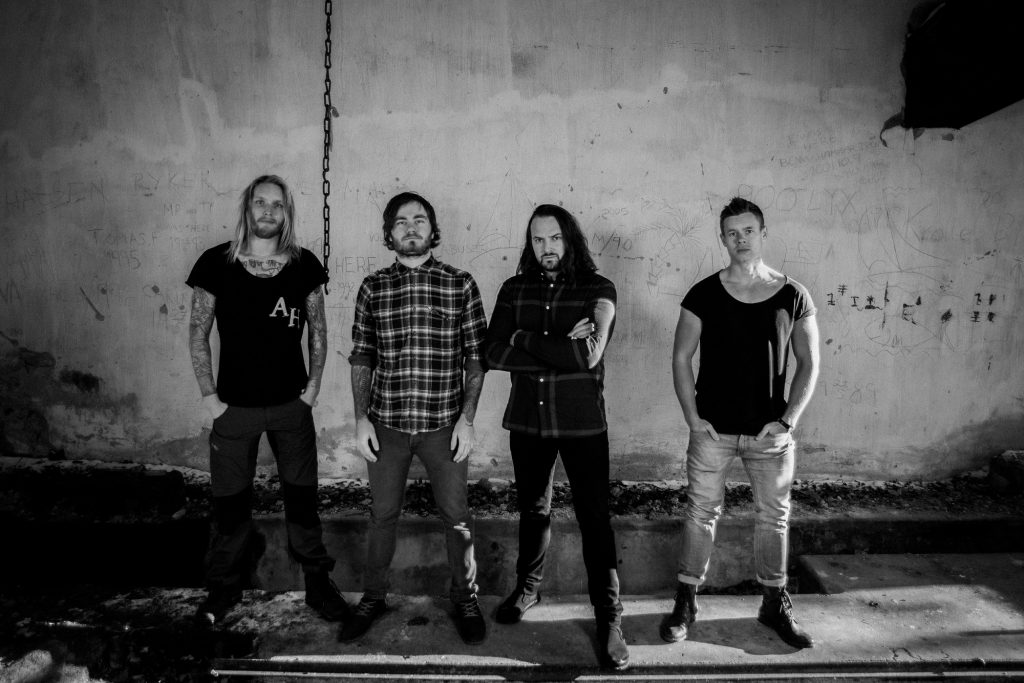 During lockdown period, I had the opportunity to talk a bit with Adam Svensson, With Heavy Hearts’ singer. We talked about the band’s music, their influences, how they build their style, and of course, their new single that will be out on May 8th!

Hello man, and thanks a lot for your time! Would you mind introduce the band please?
Adam Svensson (vocals): Hello! No problem, thanks for having us! With Heavy Hearts was formed 2015 with the release of the EP Sparks, the band quickly gained recognition playing shows all around Sweden opening up for bands like Scar Symmetry, Smash Into Pieces, Sonic Syndicate. The band followed up the release of Sparks with their first full-length The Mirror’s Principle (2016). With Heavy Hearts then released a single called Lost in 2017. The band is currently in the studio recording songs for 2020 releases. The sound of the band comes from the swedish gothenburg sound but with a new twist. The music is heavy, fast and melodical, everything you expect from swedes. The band is:
Adam Svensson – Vocals
Emil Gustavsson – Guitars
Pontus Lundstedt – Drums
Magnus Källström – Bass

Your first album, The Mirror’s Principle, will turn four years old on may 14th, how do you feel about it? Could you please explain us a bit how you created it? About instrumental composition and lyrics? What is the album’s story?
Adam: It’s been that long? I’m starting to feel old! The process was pretty simple, Emil wrote most of the guitars then everyone just added their touch to the music, myself writing the lyrics and melodies for the vocals! The theme of the album is taking a good look at yourself, how you have lived your life and that it’s time to make some changes!

What about the artwork? What does it represent, and how did you collaborate with Daniel Eek?
Adam: I actually don’t remember how we got in touch with him, but we have worked with him with the artwork ever since! The artwork is pretty much what you feel you have within, this darkness you need to get rid of.

For me, the best track is Drifter. In the review I wrote, I highlight the impressive contrast between clean and harsh vocals. How did you have the idea to make it so powerful?
Adam: The song was one of the first songs we wrote with this band, its featured on our first release Sparks and we just felt that we wanted it on the album as well, it’s a really strong song and we like it a lot! We just felt that it needed that clean vocals, it just felt right!

Recreation Of A Mind is a surprising track because verses are composed of clean sound and screams, which is very unusual. What is the story behind this song?

Adam: Yeah! That song was really fun writing and recording! We wanted a calm song for the album but we didnt want it to sound like every other calm song, so we decided to just put my screams on the entire song!

You parted ways with Oscar Fläring, your former guitar player, do you want to stay as a four- piece band or are you looking for another guitar player?
Adam: Yeah, he was a great guy but didn’t live close so he felt he couldn’t be as involved as much as he wanted! We are open to it, the future will tell!

With Heavy Hearts is from Sweden, which is Melodic Death Metal’s birthplace. Why did you choose to play a mix between Melodic Death Metal and Metalcore instead of another style? Which bands are your main influences?
Adam: I haven’t really thought about it like that, we knew we wanted to create heavy, melodic music and we have always listen to bands like In Flames and At The Gates, so that’s the music we’ve grown up to!

The band already played some shows in Sweden, how do you feel before getting on stage? Do you have a particular memory that you would like to share with us?
Adam: Yeah, it’s been a couple of good shows! I’m always most nervous when we are about to soundcheck, since I don’t know how the sound will be! Right before the gig i’ve had like two beers and just want to get out there giving it my all! One of the best memories are from a gig in our hometown, Örebro! We had an interlude before our last song (Surrender) so we went of the stage for a bit and the crowd started screaming for another song, that was really cool! We got that moment recorded and released on our youtube channel, you should check it out!

You already released a song that is not on the album, called Lost, what can you tell about the band’s future? In term of musical evolution, new material, maybe some shows or even a tour? What is your next goal as a band?
Adam: Yeah, it was back in 2017, we haven’t really done anything after that, we’ve not been active as a band! But we are back on track now with lots of new material that we will release soon! The sounds is the same but improved, we have really grown in that sense! Since it’s an epidemic right now we will not do any shows, but we use the time writing and recording!

What is the band’s routine nowadays? How does Covid-19 epidemic affects your life personally as a musician?
Adam: Not being able to play shows really sucks! But it gives us time to work on new music

What was the first Metal song you ever listened to? And which song made you think “I want to create a band and play music”?
Adam: I remember it quite well, it was ATWA by System of a Down, I fell in love with it right away and from there on it was all metal!

Could you tell us a bit about your musical career? When did you picked your first instrument (or when did you start to sing)? Did you learn alone or with a teacher?
Adam: I started playing guitar when I was like 6 I think it was, then I played guitar in some bands before I started singing, and in 2015, after playing in various bands we got With Heavy Hearts together! I had a guitar teacher for the first years, then I just learned myself, I have never went to a vocal coach!

What is the most important for you, an epic atmospheric riff or a lumbering rhythm part?
Adam: Can I say both?

Did you receive some dedications from fans about your music? Like letters, gifts or simply some nice words that you remember?
Adam: Lots of nice words! Recently I guy told me our music helped him a lot when he was feeling really low, and that is just amazing, I’m so glad that our music can help! We also have received fan made picture, one which is really impressive that she did using only dots, and it’s a picture of all of us in the band!

Just imagine you are a tour manager and you have to create a tour. With Heavy Hearts are openers, and you can choose three more bands.
Adam: Ohh, this one is really hard, In Flames will obviously play.. the two others though.. there are so many great bands! Slipknot maybe? The last one have to be.. our friends in Mark Zero, they are not very active at the moment, but they are the best guys and would really make the tour an awesome experience!

Last words are yours, thanks again for your time!
Adam: I want to thank you for having us again! I want to thank everyone who listen and share our music, without you guys we are nothing! Keep an eye out for our next single! Thanks guys!