While I breath, I hope.
That’s the latin translation of the Dir en Grey‘s masterpiece Dum Spiro Spero released in 2011.

Highly criticized by the Metal scene because it’s impossible to classify the band. They melt togather so many influences. Dir en Grey is one of the most popular japanese band. Dum Spiro Spero is a dark punch in the face of the world. This record combines pure but controled violence, and sweet melodies.
Born in 1997 from the ashes of La:Sadie after the former bass player’s departure. At the beginning, Dir en Grey played a poisoned rock/visual kein, then make their sound evolve to a strong Nu Metal then more extreme Metal. In 2008, when they released Uroboros, the sound really changes. An omnipresent but solitary bass, mesmerizing harmony of guitar, fast and powerful drums, and indescriptible vocals (mostly in japanese) because it mixes impressive guttural voice and a hypnotising clean voice. The lyrics are about multiple things (violence, political background, feelings, ancient japanese traditions…) but mostly with hidden sense and metaphorical sense, that only Kyô, the singer, really knows. He is a really talented lyricist. 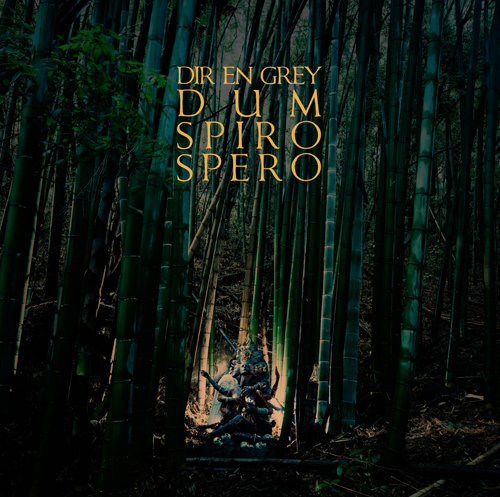 On Dum Spiro Spero, this unhbaitual mix is at its extreme. The introduction song is composed of a violated keyboard, some gargarisms from Kyô and noises from the guitars. So you are ready to sink deeply in Dir en Grey‘s chaos with The Blossoming Beelzebub. Slowly but surely the guitars lead us to the entiere band, while the bass/drums duo offers a heavy but quiet rythm. The voice is whispering and evil, but rather slow. Until Kyô shows us what his voice can really do. Screams show up until the end.
Different Sense is another approach of the band. Extreme pure violence. An unbelievable torrent of notes, under a perfectly vomited voice, with impressive vocal range. On the chorus, both clean and screaming voice are used, to let us imagine that it will calm down. But this won’t happen. An awesome solo lead by Kaoru and Die, whereas Toshia‘s bass isn’t out of step. Pure genius.
The rest of the album is mostly in the same steps : Amon (symphonic version aviable on the limited edition), Lotus, Juuyoku (where the accuracy of Shinya‘s drums are wonderfully impressive), Diabolos (the longest song of the album), Hageshia To Kono Mune No Naka De Karamitsuita Shakunetsu No Yami, Vanitas… You expected a break for the final Ruten No Tou ? No. Even if there’s less screaming voice, the musicians redouble their effort to keep alive the heavyness created all the album long.
On the limited edition there’s two more original compositions (« actualised » Rasetsukoku and Symphonic Amon) and some remix, demos and unplugged versions.
Dir en Grey is one of my favorites bands for two reasons : their originality and their strengh. This record is like a synopsis of what Metal does best since many years. An incredible mix of every kind of universe. Even the most reluctant can like this album and cannot criticized the album’s quality.