Sometimes, things or emotions need to be personnified. Ingested choosed to be the violence.

The english band (formerly known under the name of Age of Suffering from 2004 to 2006) is on stage since 2004. After their first full length in 2009, Architect of Extinction was released in 2015. It recieved immediate critical acclaim.
This monument of brutality is in the excellent line of everything they released (3 full length, a split and an EP). On this record you can hear bloody heavy riffs, super fast drums and Jay Evans‘ perfect screaming voice, in acute and grave voice. Notice that the line-up is the same since Ingested‘s beginning. The artwork is from Toshihiro Egawa (known for the artworks he made for Abigail Williams, Beheaded, Cryptopsy, Devourment, Krisiun, Massacre…), and it’s not the first one with this the band. But it’s still an awesome work. 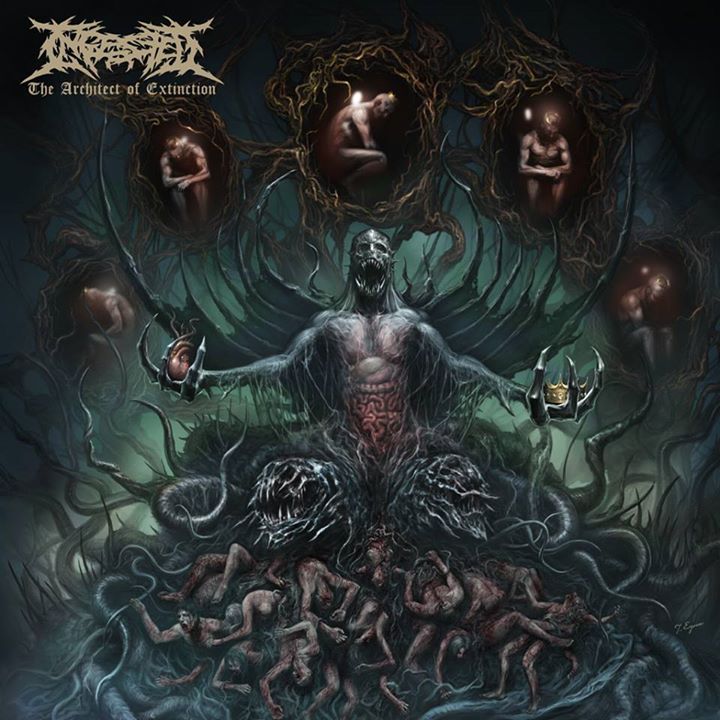 The Divine Right of Kings is the best way to start. A very nice riff, followed by a scream to set the scene. Narcissistic Apathy is a genocide by itself, while Endless Despondency will be a kind of reminder about human condition, under the heaviest riffs of this record.
Next song is The Heirs To Mankind’s Atrocities, a new violent saga featuring Julian Kersey (Aegaeon), Taylor Wientjes (The Kennedy Veil), James Schuster (Eighty Thousand Dead/Delusional Parasitosis) and Alex Teribble (Slaughter to Prevail) to join Jay. The five voices perfectly combine themselves on the song. I, Despoiler is a new opportunity for the band to explain us what violence means before the instrumental interlude that Penance is.
A Nightmare Incarnate reconnects with Jay, for the album’s most violent voice. A real speed challenge. Extinction Event offers to Lyn Jeffs (drums) to hammer his drumkit behind Brad Fuller (bass), Sam Yates and Sean Hynes‘ (guitars) strings. Amongst Vermin is on the same level, to end with Rotted Eden. The longest song, but also the more melodic song of the record, it investigates on a part of the band’s universe that seems to be forgotten on this record, but which is perfect for them.
Even if it’s not a real revolution, Architect Of Extinction allows to the band to etablish their reputation. I hope they won’t stop on such a good road, and that they can grow up as Cattle Decapitation. I also hope to see them soon, they don’t come often to France.