Since 2005 they’re smashing stages around the world. With their powerful and heavy sound, Five Finger Death Punch don’t like to be labeled, but could easily fit into Metalcore and Groove influences that Pantera creates. Some line-up changes happened, but the band is now solid since 2011, when Chris Kael takes the bass duties, to gather Ivan Moody (voice), Zoltan Bathory (guitar), Jeremy Spencer (drums) and Jason Hook (guitar).

In 2009 (Jason Hook just substitutes to Darrell Roberts and Matt Snell is still the bass player but he will left the following year) War Is The Answer, their second album, is released. Following The Way of the Fist, it will be reward as Gold in USA and allows to the band to play some European festivals. Grab your beer and push play ! 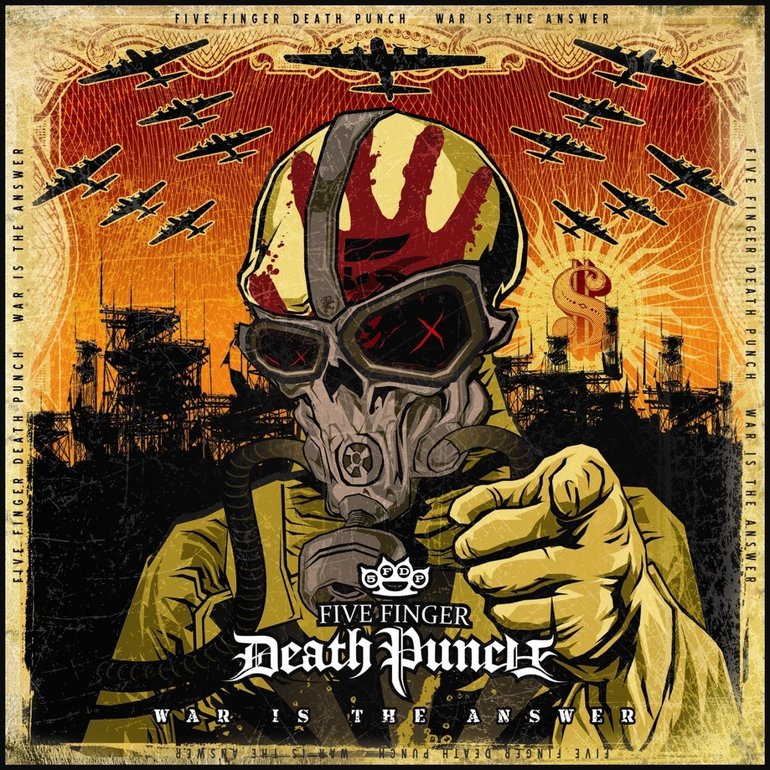 Let’s start with Dying Breed, a fast and vigorous track that melts clean voice, chorus and screaming voice. Ivan really worked on his voice to get this insane result. Hard To See is a bit slower but really catchy. Bulletproof comes back on raw fast violence, with double kick at will. No One Gets Left Behind stays on a fast tempo, but with a highlighted melodic part.
Crossing Over starts with a clean guitar and stays pretty calm, while Burn It Down‘s sound is really heavy, and the bass tone is really high on the whole song. Far From Home is the first ballad of the record, to pay tribute to the soldiers in mission outside of the US territory. Falling In Hate will shut the emotional part down thanks to Ivan’s powerful screams, but keeps the melodic parts, while My Own Hell focuses on Ivan‘s different tones of voice.
Walk Away starts with an atmospheric lead guitar part and keeps this tone during the whole song. Canto 34 is a surprising track because it’s the band’s first instrumental song. Only the musicians technical prowess are exploited here. Bad Company, a cover from the eponymous band that will become one of their bests success is another hymn for the troops outside of the US territory. The last song, War Is The Answer, comes back with heavy tones and Ivan‘s screams.
On the limited version, there is two bonus track. The first one, Succubus, will succeed to Dying Breed but, with more melodic parts. Undone, the second one, will highlight the atmospheric guitar tones to the chorus, to get a powerful uprising effect.
Nowadays on the top of festivals’ bills and chaining sold out shows on every continent, Five Finger Death Punch released last year their sixth album. I was lucky enough to catch them at Hellfest, and their shows are awsome. This band is in my top 5.