Once again we turn our eyes and ears to the east, to enjoy Japanese Metal. NeGa, formed in 2004 and unfortunately disband since 2012, has a complicated story (line-up changes and a break), but released 7 full-length and numerous singles. Lately, the band was compose of Jin (voice), San (guitar), Ray (bass and choirs) and Yuu (drums and keyboard).

The first album was release in 2006, but it’s on Vanitas, their last record that we will focus. Released some months before their last tour and their hiatus, it’s a full Visual Kei album that follows the band’s sound evolution. They offer us a one hour journey through a horrorific and scream-saturated universe. 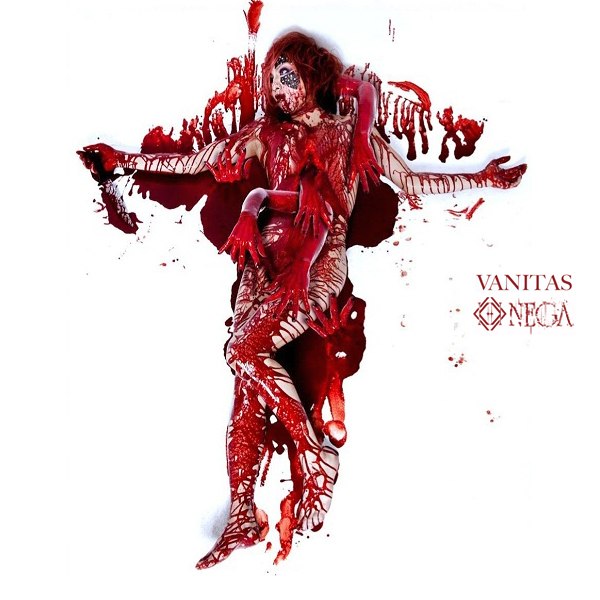 VANITAS VANITATUM (latin locution for « Vanity of vanities ») is an introduction with keyboards sound and some riffs on the end. Jin and Ray get to a surprising result when they melt screams and clean voice. Purgatory starts fast with screams on violent and heavy riffs, mainly due to Ray‘s bass. The clean voice will come later, then a Metalcore-sounding breakdown with some piano notes.
Fable In The Cold Bed‘s introduction is a a melody with white noises, which ends when the song really starts. A violent powerful riff which acts as a devastating flood. Goodbye Human starts with a sampler, then a catchy riff follows, on the verse and the chorus. It will temporary takes a back seat for a break lead by Ray‘s scream. Far from this universe, Biran Yueni is an atmospheric-orientated composition. However, we will hear quickly some screams and heavy riffs.
V-Rock Is Dead starts with an electronic melody, then an electronical effect in the voice to be back on a saturated chorus. Tamerau Kotonaku ? ? wo Kizutsuketa Yubisaki wa, Tomadou Kotonaku Kegareta ? ? wo Kazaru is what we can define as a power ballad, without forgetting the band’s saturated riffs. Munashiki ?Sei? no Guui ? ?Shi? no Shini is the longest track of this record with twelve minutes long of a psychedelic composition, melting whatever the band is able to do : heavy riffs and atmospheric parts. Really fascinating.
WILL is another power ballad, but with epic sounds due to the keyboard sound, just as well as 2012, but this one is the most synamic. DELUGE calls back screams and the band’s jerky heavy tones, even if a sweet rest on the middle of the song can be a bit surprising. HINDSIGHT is the last power ballad of the record, and it’s already the end with OMNIA VANITAS (latin locution which follows the first one, meaning « All is vanity »). This piano outro allows the band to complete the record. Some whispers from Jin, the piano begins again, then fades out in the void.
Somewhat disturbing for Metal beginners, but NeGa is one of those bands whose universe is at the same time surprising to discover and wonderful. If you’re not afraid of Japanese speaking, it’s with this beautiful language that our journey ends. Arigatô !