I hold sharp goblin voices against Thrash Metal, but it’s only for a majority of bands. Blending Death Metal and Thrash Metal, it’s rightly abusing of the powerful Death Metal voice. Battlecross is one of those bands who does it right since 2003. Created in the United States by guitar players Hiran Deraniyagala and Tony Asta, the line up suffered of many changes until 2008 when they finally settle down with Don Slatter (bass), Mike Kreger (drums) and Marshall Wood (voice), and record their first album, Push Pull Destroy in 2010 just before Kyle “Gumby” Gunther substitutes himself to Marshall Wood.

They re-record the album in 2011 with Gumby, added a track and renamed it Pursuit of Honor. Even if the band doesn’t have a full time drummer, they had Kevin Talley (Daath, ex-Dying Fetus, ex-Suffocation, ex-Six Feet Under…), Adam Pierce, Shannon Lucas (Serpentine Dominion, ex-The Black Dahlia Murder) and Brian Zink on stage with us. They often tour in the USA, had their first european festival tour some years ago, and currently defend their last record on their motherland’s roads. We don’t have time for calm reflection, let’s headbang ! 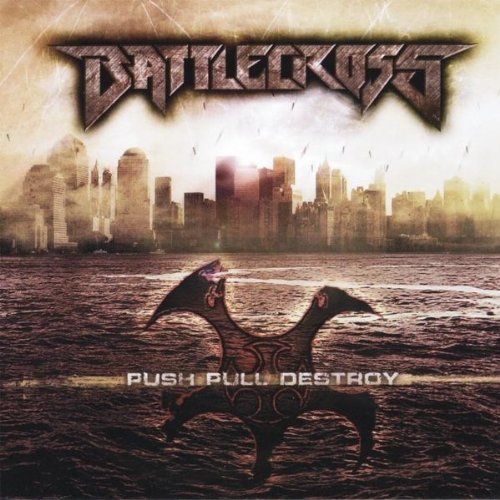 The album starts with an acoustic track, Pursuit of Honor, to announce the awesome Push, Pull, Destroy.  The first thing that draws attention is Gumby’s voice and deep breath.  It’s… It’s not even human ! Musicians are not outdone, with an extreme high level of technicity and mastery of their instrument. Gumby overuses of his deep breath to alternate between sharp Thrash and deeper Death growls. Notice the bass solo just before the guitar solo !

No time to breath, Kaleb starts. Once again there’s an awesomely high level of technicity in this pure Thrash Metal song, with an outstanding bass tone that knows how to stand out from the other instruments without flooding the whole song. Deception won’t disappoint me, because Death voice predominates over fast and bloody tasting riffs. There’s plenty of harmonic tones and the drummer seems to be unleashed behind his drumkit, especially with his cymbals.

Man Of Stone comes back on a Thrash and energising atmosphere with its catchy chorus and even another bass solo, while Breaking You focuses on blast beats and heavy tones. Gumby knows how to alternate between his voices to add some muscular pain on our neck, then the last riff slowly erases itself to be replaced by Rupture’s first scream. This song is such a melodic jewel, and perfectly fits to the band’s discography with epic tones during breaks.

Leech is the shortest track, but focuses on violence to stand out. An aggressive riff on the beginning, then a blast beat rain that raises again under the beastial scream. Even if Death growl is uncommon on this song, it’s a punchy use ! Once again, bass sound is highlited, that proves that Don Slater is a great bass player.

Better Off Dead was made of the same pattern that blends Thrash lead guitar and Death rythm guitar to blow up in our faces, while Misery has the catchiest beginning of this record. It’s impossible to not being involved by this notable composition. A real kick barrage will sublimate melodic riffs and an extremely sharp voice. On the end, the a little bass/drums duo comes right before another huge scream, then the epic solo the track needed.

Foreshadowing, the last one, has some acoustic sound with samplers and a distant guitar solo to mark the end of this record.

A breath air blows upon Death Metal since a while, and blendings styles together honors it. Battlecross, even without a permanent drummer is a band that will obviously grow up in the near future. A little stop by France would be really great, and my neck would enjoy it !