The band is strongly engaged for animal rights, and all the band members were vegetarian at the beginning, but now only Travis Ryan and Josh Elmore are, because of the departure of founding members. Cattle Decapitation made seven full-length, a split (with Caninus in 2005) and an EP. I discovered the american hurricane in 2012, with the release of A Monolith of Humanity, and we will focus on this beauty. Let the genocide begin ! 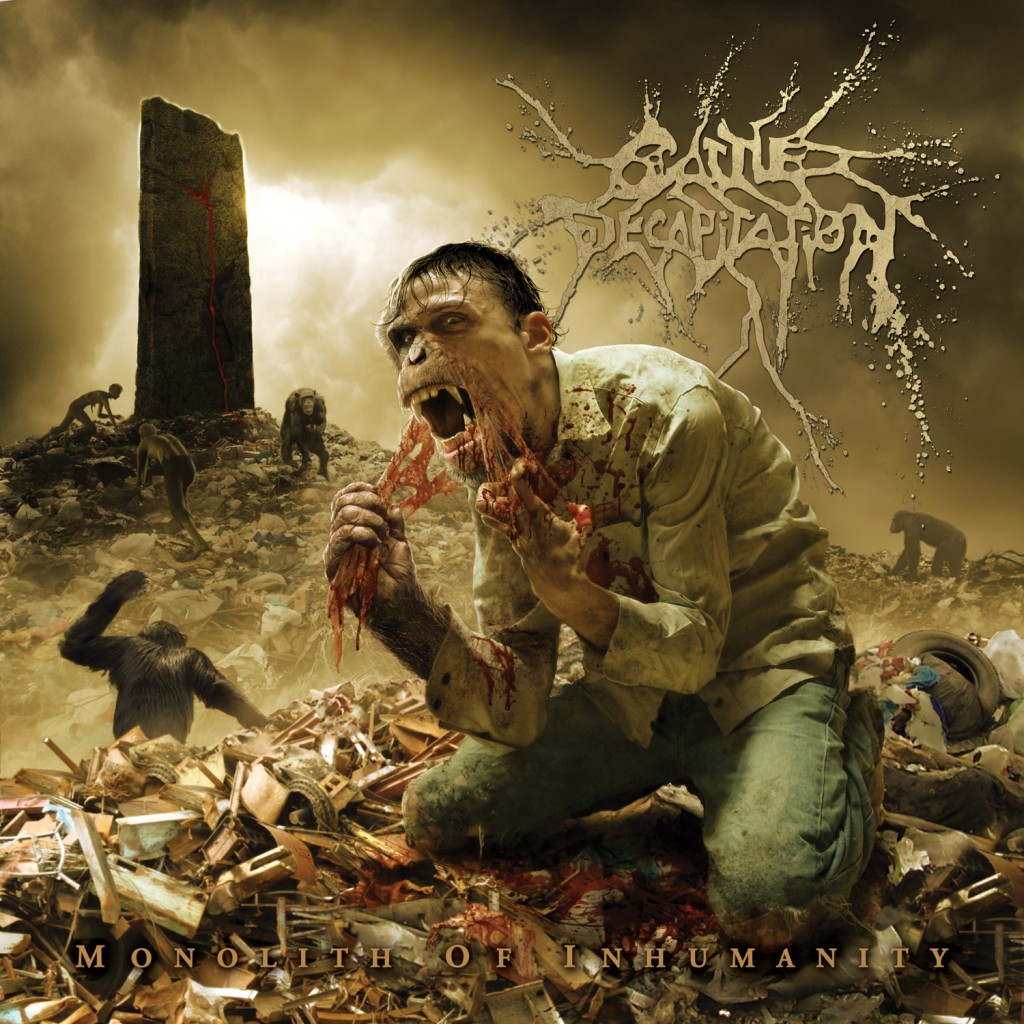 It’s with the atmospheric sampler then The Carbon Stampede’s devastating riff that the record starts. Travis Ryan screams with no further delay over a massive rhythm part. Dead Set On Suicide approves that the americans are here to break some necks. Travis Ryan will use two different scream skills, each scream is as effective as the other one.

A Living Breathing Piece of Defecating Meat imposes itself as the record’s best song, through its strengh and its and its deepness. The chorus with the second vocal technic is truly insane. It seems to be really hard to continue with such an intensity, but Forced Gender Reassignment will take on the challenge with success. It’s another wall of sound created by the blast beats rush and one of the strongest rhythmic ever created.

A bit more into Progressive Metal, Gristle Licker continues on the same pattern than the previous songs, with a violent, fast and heavy sound, while Projectile Ovulation focuses on riff technicity under a blast beat flood. No time to rest, it’s the divine Lifestalker that picks up the burden on this awesome record. Once again, we feel an extreme violence and technicity in those neat worked riffs.

Do Not Resuscitate starts with the impression that is slow, but in fact it is not. If Cattle Decapitation could really decapitate people at each note, the country would just have a few days to live. Your Disposal is the most melodic track, and Travis Ryan perfectly uses once again his two voices for an awesomely powerful song. The video clip, highly disturbing, tells a part of Adam and Eve’s story.

If you missed sampler introductions, here is The Monolith, that starts with some tribal drums  and a crackling fire, a distant voice that mumbles, then leaves for Kingdom of Tyrants. Last song, this one focuses on the band’s renown recipe to succeed, and that’s all that we need. A bit atmospheric on some times, this song is nonetheless violent, and not only by the lyrics.

If Cattle Decapitation draws attention by their vegan oriented songs, it’s now with their violence and professionalism that they shine among others. Highly expected during Hellfest 2016, the band gathered a huge crowd even if they played early. The tour that followed across Europe were also a huge success, and I’m waiting to see them on a smaller venue and with a longer setlist.