Japan again? Sure. Why? Because this country is full of talented musicians, and japanese bands are part of the most original ones. Church Of Misery is a adventure led by Tatsu Mikami (bass, G.A.T.E.S., Sonic Flower) since 1995.

Throughout its six full-length, five EP and seven split albums, the band developed a worldwide fame because of their music’s quality and lyrics themes : each song is related to a serial killer. This year, Tatsu hired Junichi Yamamura on drums, Yasuto Muraki on guitar and Hiroyuki Takano on vocals (Sithter, ex-Psychotoblack), but when Houses Of The Unholy was release, Hideki Fukasawa screamed alongside with Tatsu while doing some samples on a keyboard, Junji Narita striked his drums like a beast and Thomas Sutton played the devil’s harmonics on guitar. Listen to these killers story… 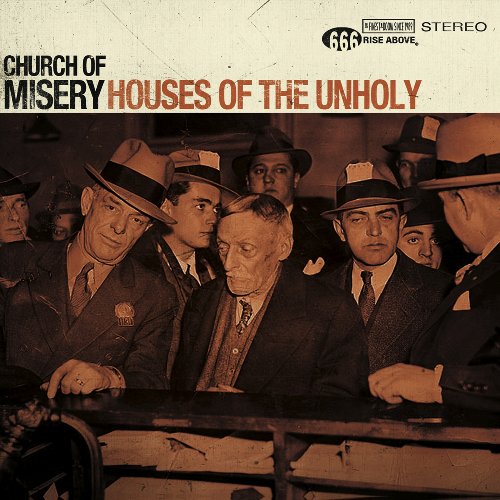 The record starts with introduction crackles of the song El Padrino (Adolfo de Jesus Constanzo). This track, although very slow on the beginning, slowly flirts with psychedelic sounds that Hideki could have with his keyboard and Thomas’ guitar. The main riff comes and Hideki start to scream. A slow part reminding some heavy Blues on the end leads to Shotgun Boogie (James Oliver Huberty). In reverse to the killer it represents (who had some troubles to walk), this track is faster and more catchy. The solo interrupts many times, and perfectly reflects madness in Huberty’s crime.

The Gray Man (Albert Fish) pays a sincere tribute to the killer. They indeed worked more on the riffs, and even if Hideki still screams, choirs are here to support him sometimes. The rhythm part is also more progressive and unleashes madness from the solo. The introductive sampler of Blood Sucking Freak (Richard Trenton Chase) has some sharp harmonics that raises the hackles on your neck before moving on the sweet Master Heartache, which is a cover song of the Heavy Metal band Sir Lord Baltimore. This cover has this mad element that makes Church Of Misery interesting and that we love to find in their compositions.

Another sampler introduces the powerful Born To Raise Hell (Richard Speck), which is also the title of a book based on the criminal. The voice comes from a documentary, and leads to a tortured rhythm track that makes a perfect soundtrack for such a psychopath. The last track, Badlands (Charles Starkweather & Caril Fugate) will also be introduced by a sampled voice that explains Charles and Caril’s story. This crime’s singularity is represented by the cold side of the rhythm riff, with choirs that can freeze the blood in your veins.

While exploring the whole concept of murderer’s history, music feel benefits. Church Of Misery offers with Houses Of The Unholy some morbid and haunting rhythms, under screams that breath pain and hatred. Even if the band isn’t this active on stage, the few live shows that were recorded are really energetics. I hope that with this new line-up, the band will be able to do some tours, without forgetting Europe of course !