There is many bands that love blending styles for creating stuff that takes the best part of both. And there is God In A Cone, that blends every existing and conceivable styles, Metal or not.

Created few times ago by Nikos Marinos (every instruments, voice) in Greece, the project quickly comes alive through a first album which is fully available on YouTube. A second then a third one will come as fast as the first one, and since may 2017, it’s Parasitoid that Nikos gives us, with a clip for each song. Helped by producer and mixer Dimitris Delis who also participated in guitar’s recording, this record blends everything that comes in Nikos’ mind during the creation process. Don’t expect anything, because everything is coming. 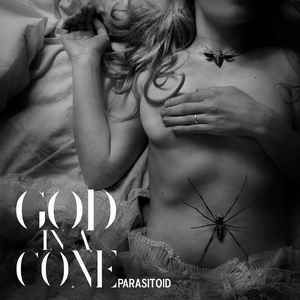 It’s with F**k Your Cancer that Nikos starts this record. Interspersed with screams and vocals on an Industrial rhythm, I can assure you that this track will be engraved in your mind if you listen to it more than twice. Kind of compromise between an atmospheric and violent sound. The second clip, Tomb, clearly changes of range. More dancing, but also with a distant voice and a bit of echo, this track mixes ambient sounds with a joyful lead guitar. For Hand and its unhealthy video, it’s Metal drums that takes over the sound while riffs are still disturbing. The ambience, that calms a bit down, is still oppressing to match with this composition’s violent universe.

Obscurist is an acoustic track of which catchy drums and mesmerising video suddenly switch on a saturated sound after a scream, but without turning off this quiet and restful atmosphere. A real transition now, Chasma is a song with greek lyrics that lasts less than two minutes but that perfectly allows to chain with Parasitoid. Starting as a calm composition despite a saturated guitar, the rhythm suddenly inflames itself with Nikos’ voice. It’s clearly possible to define where the riffs mushrooms only by listening to the song for the first time, because of the break progression is tangible. The last track, Black Home picks up an atmospheric rhythm with an absorbing echo on voice, to stay on an Industrial and nearly Aggrotech style. The use of keyboards gives a heavy dimension to the composition, that ends on a sample.

If this full-length is rather quick, it’s impossible to say that it’s a steady one. Always based on Industrial Metal, God In A Cone has no limit, and it’s this fact that allows us to listen to it over and over and be surprised each time. This blending is a success, and even if Nikos Marinos is the only captain, he perfectly knows how to ship his vessel.