Today we will listen to one of the most violent and gore Death Metal legend’s album, with an emaciated imagery that was censured in many countries. Cannibal Corpse, an american band whose one and only will is to ward off violence and horror’s limits.

ated in 1988 by Alex Webster (bass, who also plays in Conquering Dystopia and Blotted Science), Paul Mazurkiewicz (drums) and Chris Barnes (vocals, nowadays in Six Feet Under), the band releases some albums which are now considered by many as some pivotals of the genre. In 1993, Rob Barrett (guitar) is hired by the band (he’ll left four years later to come back in 2005), then George “Corpsegrinder” Fischer (also in Paths Of Possession and Serpentine Dominion) replaces Chris on vocals in 1995. In 1997, it’s Pat O’Brien (guitar) that enters in the band. Fourteen records, each of them as powerful as the others. But the one that will blow us away today is Kill, released in 2006. Get your axe ready. 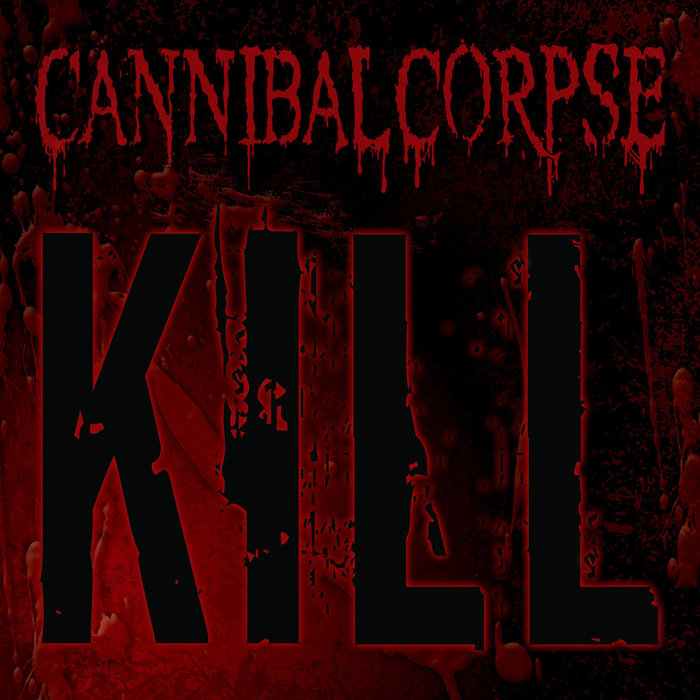 Let’s hit the road with a running start with The Time To Kill Is Now, and its incredibly powerful scream. Rhythm part would make a zombie headbang, harmonics are bloody as hell and Corpsegrinder’s voice perfectly fits to the heavy blend whose sound is both bold and modern in two minutes. We continue with Make Them Suffer, my favorite track. Fast, effective, imposant and catchy riffs, with a killer voice that is mid-way between a deep growl and a bloodcurdling scream. The band continues to heavily punch us with Murder Worship, a track with a jerky rhythm part and a guitar riff that sprouts an as impressive flow of notes as Corpsegrinder’s voice is merciless.
Necrosadistic Warning strengthens the wall of sound aspect with a perfect coordination between rhythm part and kick drums, that gives us the feeling of being continuously thrown through the song. Another of my favorite tracks, Five Nails Through The Neck, makes musicians battle over technicity to achieve riffs. You should also note the powerful and amazingly long scream right after a well placed break. Faster than previously, Purification By Fire calls blast beat back to drive us more in the ground while Death Walking Terror makes us headbang thanks to its jerky as Hell riffs and Alex Webster’s hugely effective bass.
Why should we stop when we know that the americans composed Barbaric Bludgeonings for us? As heavy as always, Cannibal Corpse’s sound will wreak havoc on the weakest necks, but it may reassure you that The Discipline Of Revenge focuses on technical aspect and harmonics. After the final solo, lasts riffs throw us on Brain Removal Device’s sharp rhythmic. Once again more jerky, this composition promises strong aches after a moment in the pit.
Further acceleration with Maniacal and its devilish harmonics right before boisterous riffs. Speed seems to be the key word of this record’s end, because Submerged In Boiling Flesh follows the same pattern, while being guided by Corpsegrinder’s shouts. The last track, Infinite Misery, comes to break the rhythm with a low-speed but a heavier sound than usual. This change can be surprising, but it’s still faithful to the band’s creed which is to offer a still powerful and violent music, but this time on an instrumental track.

Masters in Death Metal art, Cannibal Corpse is also a tireless demon. If this record isn’t the most famous one, it is undoubtedly frightening effective. The band’s tour gather furious fans from all around the world, and their sound is usually excellent. No frills, just Death Metal.