At the beginning of the 2000 year, Indian Metal wave was driven by Demonic Resurrection. The Demonstealer (AKA Sahil Makhija, voice/guitar) gather some musicians to record a first full-length.

He will face numerous line-up changes, but will regularly relapse, until the line-up became solid with Mephisto (keyboards), Ashwin Shiryan (bass), Nishith Hegde (guitar) et Virendra Kaith (drums). Together, they create a crowdfunding campaign for their fifth album, Dashavatar. The campaign is a real success, but Mephisto decided to leave the band before it ends, forcing Sahil to record keyboards for this one, then Ashwin leaves too in 2017. The album redraws through 10 songs the story of the indian god Vishnu’s ten avatars, and I invite you to look at this exotic univers. Some indian musicians are also part of this journey… 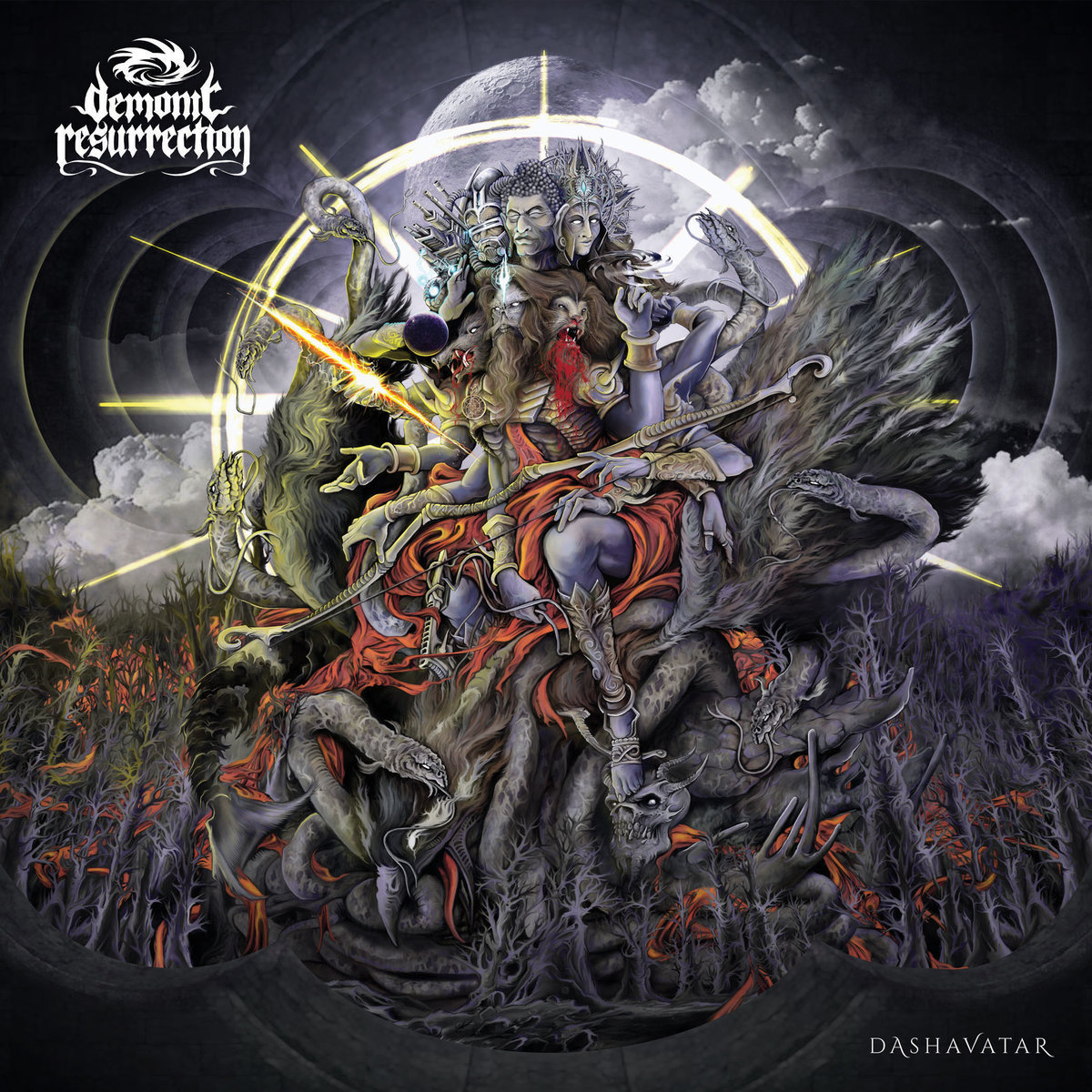 Let’s start with Matsya – The Fish’s introduction with a voice on a sample followed by a sitar played by Rishab Seen. The indian’s violent but melodic rhythm part comes over before The Demonstealer starts to scream. Blast beat wonderfully contrasts with sitar moments to make us travel a bit more until we discover Kuma – The Tortoise. It’s a more imposant rhythm part that the band unveils, while keeping the melodic part with, inter alia, a beautiful clean voice away. Harmonics that are developed on some moments and traditional indian instruments using perfectly fulfill their function, and the rhythm come back is more powerful. A slow introduction for Varaha – The Boar allows to the band to surprise us while coming back to their jerky and violent rhythmic. Once again, clean voice wonderfully fits in this powerful composition.
Vamana – The Dwarf focuses on harmonics and keyboard to support simple but efficient and fast riffs. While stepping forward on the track, some Folk sounds appear, but it’s nothing but a memory with Narasimha – The Man-Lion’s Symphonic riffs. Orchestrations allow to make this composition a frightening one, and it really feels exhilarating. Demonic Resurrection keeps this serious tone for Parashurama – The Axe Wielder, during this bloodthirsty avatar’s story. This track, the record’s most violent one, sounds like the avatar is : merciless and methodic.

Reconnecting with a furious melody, Rama – The Prince will challenge the musicians about technicity. Leering sometimes at Progressive Metal, this track also stays focus on violence, unlike Krishna – The Cowherd. Supported by a flute, this song slowly comes back to Folk Metal with a very catchy clean voice and of which melodic part will haunt you for hours. Screams come back, and with them the indian music’s massive aspect, but it’s another atmosphere that follows. Buddha – The Teacher’s atmospheric vocals and riffs will lead you far from home. A quiet and mesmerising rhythm track will nail you to the ground until the last moment. Incantations resume before giving way to the last track, Kalki – The Destroyer Of Filth. A sweet but unhealthy sound introduces this song, that highlights the bass, with only some yelled sentences on the end. Unlike the avatar it represents, this track is really the album’s darkest one.

The story related by Demonic Resurrection ended. Whether you were into their mystical and particular universe or not, its riffs couldn’t let you insensitive. Each avatar has its own aspect, and the indians succeed to gather them all under the same flag. Indian Metal spearhead, the band plays very few shows outside of their country and deserve in my opinion more worldwide recognition.