Let’s leap back in the past. Obituary is one of the firsts bands to play a style that will be later named Death Metal.

Whether the band was created in 1984 under the name of Executionner, it will change for Xecutionner in 1986 before choosing Obituary in 1988. Therefore, they release their first full-length the next year, and it’s the beginning of a journey that, despite a hiatus between 1997 and 2003, drive them to release their tenth album last year. If brothers Donald (drums) and John Tardy (vocals) founded the project, they’re not the only ones to remain in the band from the beginning. Trevor Peres (guitar) indeed walk with them since the firsts riffs.The americans can also deal with a solid line-up, completed by Terry Butler (bass, ex-Six Feet Under, ex-Gruesome, ex-Death) and Kenny Andrews (guitar) since few years. Let’s come back on their second killing, Cause Of Death, released in 1990. Recorded with Frank Watkins on bass (deceased in 2015) and James Murphy on guitar alongside with Trevor, they only confirm that Death metal has a great future ahead of it on this time. 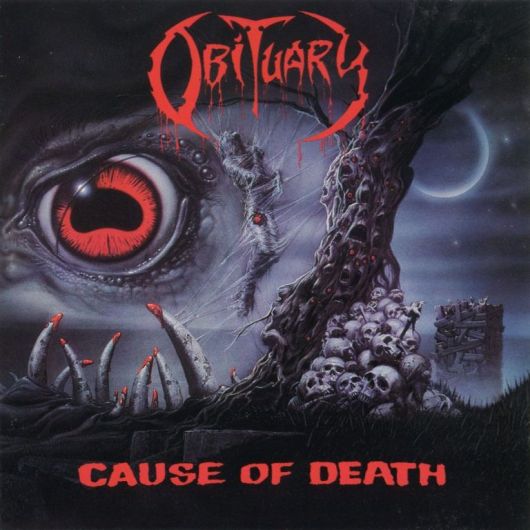 We begin with Infected and its frightening sampler that sets a dark ambiance up on the very beginning. Firsts riffs are greasy, heavy and oppressive, but rhythmic suddenly kickstarts. Blast beats arise together with John’s screams. Under this layer of violence, we can notice musician’s dexterity, lining up lead guitar parts with powerful rhythm parts, and even a short solo. We unveil a cavernous growl on Body bag, that resounds moments after guitars started their service. Rhythm becomes simpler, but the band still offers powerful riffs, and quite innovative back in the days. The mix was good, each instrument at its place, even on faster parts that could have been a bit chaotic. Still on the band’s setlist, Chopped In Half knew how to convince an audience that discovered Death Metal thanks to a catchy rhythmic and vocals that stay in mind long after the track’s end.
We go back on a faster composition with Circle Of Tyrants that, a Celtic Frost cover, didn’t get old, and easily incite to headbanging with memorable riffs, but it’s mainly Dying, another often played track, that the audience keeps in mind. Once again, Obituary’s recipe strikes. A massive rhythm track hits in full force the listener, whose have no other choice but to join to this nearly instrumental composition. John’s roar only comes at the end for some sentences, but that sublimates a legendary rhythmic. On Find The Arise, we also have just a few vocals. A rumbling thunder sampler begins the onslaught, and the sentences that John Tardy screams join bloody riffs. Musicians continue to play until the end, just before John joins again to begin Cause Of Death, the eponymous track. Vocals assume a more important place than on the two previous tracks, but the musician’s creativity has been fully exploited. Huge harmonics hit give the band the aspect they’ve managed to remain untouched until now.
A welcomed speeding will get your speakers on fire with Memories Remain and a jerky at possible sound that sometimes flirt with frightening tones to enjoy bestial screams. The rhythm becomes heavier, but it’s a sharp lead guitar part that finishes this track before the last one. Named Turned Inside Out, it’s also part of numerous live shows, and we easily understand why. The band waited the end of the record to unveil us the most catching song, and that alternates between technic rhythm and heavy parts, under powerful screams. A really good surprise.

Obituary aren’t seen as part of pioneers of a timeless style, but also as one of the genre’s most influential bands for nothing. With this full-length, they proved that their sound is unique, despite how few Death Metal bands were active back in time, but also a high-quality one, that they never lose with years, by the way. Even on stage and all of near from fifty years old, americans give it everything and each show is delightful.