Announced last year as one of the most eclectic collaboration, We Sell The Dead started making a name of themselves before a single track release.

Created by the meeting of Niclas Engelin (guitars, member of In Flames and Engel), Gas Lipstick (drums, ex-HIM), Jonas Slättung (bass, Drömriket) et Appolo Papathanasio (vocals, ex-Firewind, Spiritual Beggars), their universes collide, make concessions and melt together to create Heaven Doesn’t Want You And Hell Is Full, the band’s first record. They describe themselves as Victorian influenced Heavy Metal, but it’s clear that Doom and Melodic Death Metal sounds are part of the recipe, drawing on the famous Jack The Ripper. 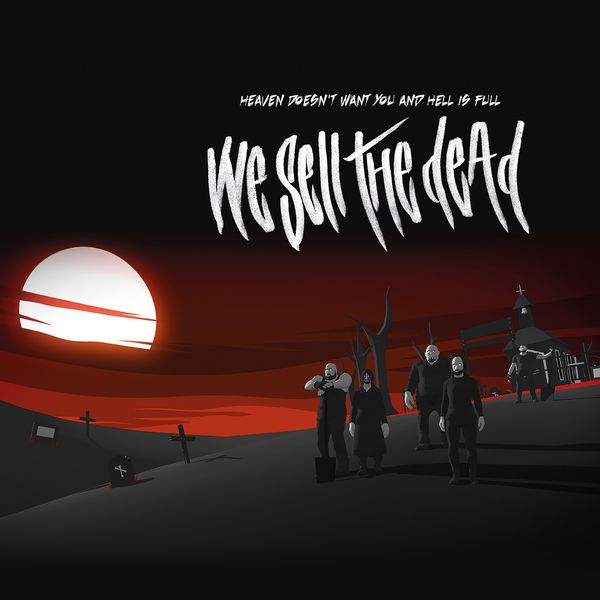 The Body Market is an introductive sample that presents us the band’s cheerful but gloomy universe. A man offers body parts “straight from the cemetery” before leaving for the music box that only shuts when Echoes Of An Ugly Past starts. On the very first riff, there is no doubt about the fact that their realm will be heavy and weighing. Niclas’ lead guitar does magic on the powerful and haunting rhythm part created by Gas and Jonas, while Appolo’s delightful voice brings our mind in the dark landscape. The melodic side is still present everywhere, throughout the heavy main riff, atmospheric breaks or even at the end of the song when there’s nothing left but clean sound. Leave Me Alone starts with the same pattern : heavy riffs but filled with melodic harmonics and mesmerizing vocals. It seems like the singer increases his voice on this track, and choirs strengthen the ceremonious aspect of We Sell The Dead’s music.
A more Progressive structure appears on Imagine, as well as a well constructed and effective solo, while the band develops their riffs thanks to a still heavy and powerful sound, but charged with feelings and framing ethnic influenced drum. Ambiance changes for Turn It Over that takes up way more cheerful tones. Appolo’s voice is sometimes deeper, riffs are still under very tight control to lead the listener wherever they wish, but the whole atmosphere is different. Maybe a bit Power Metal influenced, but whatever, this composition perfectly works. Melting keyboards and acoustic guitar makes Too Cold To Touch a wonderful ballad, with its lyrics based on the killer’s feelings and thoughts. Frightening yet beautiful.
Melancholy takes musicians over for Trust. Sound becomes dark again, but the slowed tempo and orchestral stuff make this track a near from esoteric dimension, and Appolo literally beams with this range. The singer has a voice that perfectly fits to this kid of ambience, remaining powerful, while Pale And Perfect feeds a pain that came from nowhere. I can be wrong, but I really feel that the hideous rhythm track created by the band is only useful to express an intense sorrow. A really catchy one that ends on the main riff that stops dead to finally hear Silent Scream, the last song. Slower and more melancholic, this second ballad allows to set a freezing ambience up to magnificently close this first full-length.

We Sell The Dead offer with Heaven Doesn’t Want You And Hell Is Full a rich music that is heavily influenced by the whole band’s universes, even if they’re really different. In Flames’ melodic side meets HIM’s languor with a sound that sometimes speeds up but still keeps this special universe that was created at the very beginning. Musicians opened their world’s door, and it’s really hard to leave as it is fascinating.