It’s not this unusual to find Old School Death Metal fans nowadays, but it’s a bit uncommon to find some bands that still has this particular sound since years like Asphyx.

Created in 1987 in the Netherlands, the band has a rambling story. The band started stimulated by Bob Bagchus (drums), Tony Brookhuis (guitar) and Christian Colli (bass/vocals), but the line-up suffers many changes. Bob is the one who stayed the most in the band (even a name change for Soulburn in 1996, the a break from 2000 to 2007), but he doesn’t play with Asphyx anymore since 2014, giving the leader role to Martin Van Drunen (vocals from 1990 to 1992 then since 2007, also in Grand Supreme Blood Court, ex-Pestilence, ex-Hail Of Bullets). He now sings alongside with Paul Baayens (guitar, Thanatos, ex-Hail Of Bullets), Alwin Zuur (bass, Grand Supreme Blood Court) and Stefan Hüskens (drums, Metalucifer, Desaster, Sodom). All in all, the band released nine albums, five of them including Martin on vocals, but it’s on the eighth, Deathhammer, that we will now focus. May the lesson begin. 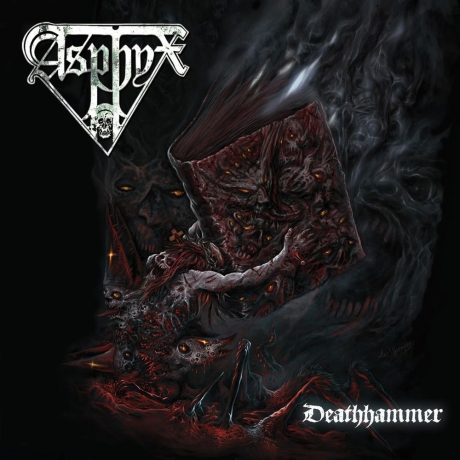 The band starts its display of power with Into The Timewastes, a song as fast as representative of the band’s ability to chain bloody riffs. As much about Old School sound than about the straight rhythm part, they don’t waste a single moment to impress us. A near from constant blast beat hammers the listener while he’s lacerated by other instruments and Martins’s voice that shivers him thanks to the screams he’s the only one to master. Asphyx switches to Deathhammer, the eponymous track and its punkish rhythmic. Barely more than two minutes, but an untouched rage from the very beginning to the end. Riffs are easy to play, but there’s a lot of energy and a strong will. Way slower, but also way longer, Mindfield can count on a haunting and heavy rhythmic in addition to its singer’s screaming voice to settle with its psychedelic solo. This unrecognized track reveals another aspect of the band’s music.
We come back on a more energetic rhythm part on Of Days When Blades Turned Blunt, melting warlike blast beat, raw vocals and catchy riffs that will increase a bit before the end, just before giving way to the slow Der Landser. This composition is still stabbing despite the tempo increasement, provoking a kind of riff contemplation by the listener, just like a hypnotic trance when Martin evokes this soldier’s sad story. This long track is followed by the unhealthy Reign Of The Brute. Why do I say unhealthy? There’s something inside of the rhythm part of this Old School track that seems peculiar, but it’s also this thing that made its charm. The next track, The Flood, waters us with a furious note stream that gives us an irresistible desire of headbanging. Did you ever hear this track during a live performance? It’s near from unreal. Another slowdown in anticipation for We Doom You To Death which, ironically, focuses on a heavy and greasy Doom Death that calls for melancholic and haunting tones. Lead guitar parts are also part of the bill while rhythmic slowly tramples us, under Martin’s screams. Vespa Crabro comes back to the band’s cruising speed, but keeps this heavy and bloody aspect due to the guitar’s harmonics. Drum kick’s rolls gives it Asphyx’s very own sound, but As The Magma Mammoth Rises closes the album. Near from eight minutes of lumbering composition that doesn’t focus on speed, it’s more about deafening tones and crippling riffs. When the wheels are turning, impossible to stop them.

Asphyx has always enjoyed a very good reputation amongst the Death Metal scene thanks to the quality of their songs, but also thanks to their steadiness. You can indeed randomly pick an album and be sure that you’ll find out an excellent one with some tracks that stand out. The band’s tours aren’t this common nowadays, and you can mainly discover the Dutch during festivals, but it’s a good thing because they love that.