There’s some records that are quite anonymously released, some that make some waves, and there are those we were eagerly waiting for. Rivers Of Nihil are part of the third class.

The band is born in 2009 pushed by Brody Uttley (guitar) and Adam Biggs (bass/vocals), when they both were in Dissidian, but they also team with Jake Dieffenbach (vocals). There was some line-up changes between the first EP in 2010 and Where Owls Know My Name, their last record, just like Jon Topore’s coming (guitar) in 2014 Jared Klein (drums) succession in 2017, but everybody agree to say that the band just reached a kind of musical climax.Supported by traditional instruments (saxophone, violin, trumpet…) and members from Black Crown Initiate and The Zenith Passage, the americans wanted to raise the game. 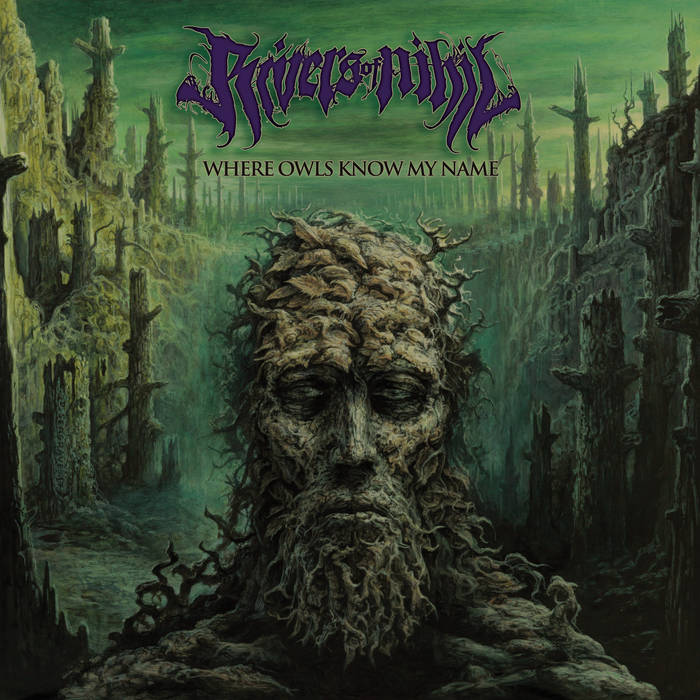 The first track, Cancer/Moonspeak, is an atmospheric introduction that has a few lyrics, spoken or sung, and also samples that slowly lead us to The Silent Life. This composition itself proves that the band was highly inspired to begin this record. Technical harmonics meet Atmospheric Death metal rhythm parts for an explosive blend. Jake’s vocals, as powerful as always, collides to this quiet and intriguing wall of sound, that finally make some place for a saxophone and an outer-space lead guitar. Instruments combine themselves into a nameless chaos to return to normal for A Home. Way more Progressive, this track illustrates again how technical the musicians can compose to create this amazing outcome that highlights Adam’s bass for a flabbergasting sound. The double vocals that follows clean vocals is perfect.
You really thought that the beginning’s quietness would stay forever? So you don’t really know the band, that offers a pure violence track with Old Nothing’s jerky riffs. This song barely has a moment to snooze, and the break offers to Justin McKinney (The Zenith Passage, ex-The Faceless) the opportunity to play a moving solo. Subtle Change (Including the Forest of Transition and Dissatisfaction Dance) is just a bit less intense with an introduction that progressively develops around us and a rhythm track that explodes to leave, come back, leave again… Terrestria III: Wither starts in surprising way, but it is worth the wait, because of the song’s phenomenal strength. Very few lyrics, but instruments are talkative.
The band comes back on a massive and Atmospheric Death Metal at the same time with Hollow, a new composition that tests the musicians technicity for a long moment, but Death Is Real was created on the same pattern. Sometimes too slow for Technical Death purists, this track is a real gem for whoever knows to wait. The eponymous track, Where Owlw Know My Name starts as a violent song, but when sound comes there’s an intriguing quietness. However very atmospheric, it’s impossible to not feel the pressure that comes from the band’s riffs when they play. Once again, sax is impressive and works for an original but controlled break from beginning to end, which also includes Andy Thomas’ (Black Crown Initiate) vocals. The last track, Capricorn / Agoratopia, starts on a nearly ghostly voice in the background with some frightening screaming choirs that sends chills up to the spine to create one last time this disturbing ambience in the listener’s mind to definitively break Technical Death Metal’s code. Pure genius.

It has been a long time that I didn’t feel that a Technical Death Metal full-length was this thoughtful and dreamful. Rivers Of Nihil for sure has always been an outstanding band in the scene, but their own style made people talk about it recently. Lately announced, Where Owls Know My Name is worthwhile, and it will be a true challenge for them to create something better next time.

One thought on “Review 120 : Rivers Of Nihil – Where Owls Know My Name – English”