While the band didn’t make people speak of them since years already, The Secret returns on the front stage.

Created in Italy in 2003 by Michael Bertoldini (guitar/keyboards, ex-For The Dying Sky) and Marco Coslovitch (vocals, ex-For The Dying Sky), the band is currently composed of Tommaso Corte (drums, Slowmotion Apocalypse) since 2010 and Lorenzo Gulminelli (bass, Hierophant) since 2011. When they started, they played Metalcore that suddenly evolves into a mix of Black Metal and Grindcore. After their fourth album in 2012, the band became more silent, but it’s against all odds that Lux Tenebris, a three-tracks EP, is released. Sink into darkness with me. 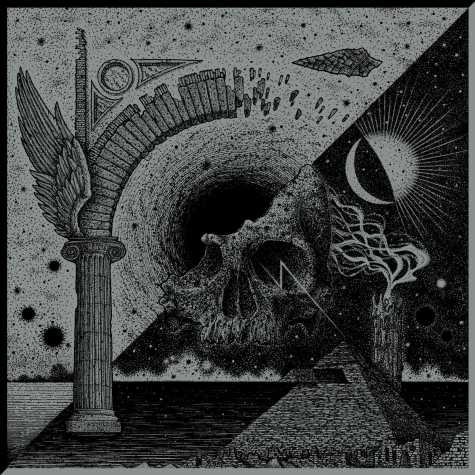 The EP begins with Vertigo, a dark and nearly disturbing instrumental track with dissonant harmonics at will. The band progressively sets a gruesome ambience up, then enforces its rhythmic thanks to an unhealthy drum beat that leads to distant screams. The Sorrowful Void takes over, and it’s on a filthy and as sick as the previous track that the singer’s growls come. While the first part is violent and uncompromising, the band offers an instrumental break which is, even if it is still in this Black/Grind side of the music, quite restful. Even fast hits on the drum kit sounds relaxing, and when Marco begin to scream again, heads slowly move thanks to the italians. Ever more dissonant, lead guitar provides a sharp sound that will fade into black. The last song, Cupio Dissolvi, returns on a vigorous blast that the other instruments instantly follow. The demon is anew unleashed on vocals while musicians create a screed of darkness that progressively shrouds the listener, thanks to those riffs full of an omnipresent violence that only asks for freedom.

More complex than it at first appears, The Secret’s universe is as rich as dark, and as unhealthy as interesting. In my opinion way too short, Lux Tenebris is an excellent foretaste to something more powerful that, I really hope, won’t take too much time to hit us.