The mixture of several styles as Aeternus plays always wakes my interest up.

Created in Norway in 1993 by Ares (vocals/guitar), the project trends to a dark and violent Black Metal. But through years, their style evolves to become a Black/Death with Doom influences music. Focusing on the line-up, there will be some changes, but the band is made of Ares, Phobos (drums) and Eld (bass) to compose their tracks. Only after twenty-five years of career that Heathen, the band’s eighth full-length, is released. Let yourself drawn into this mystical sound. 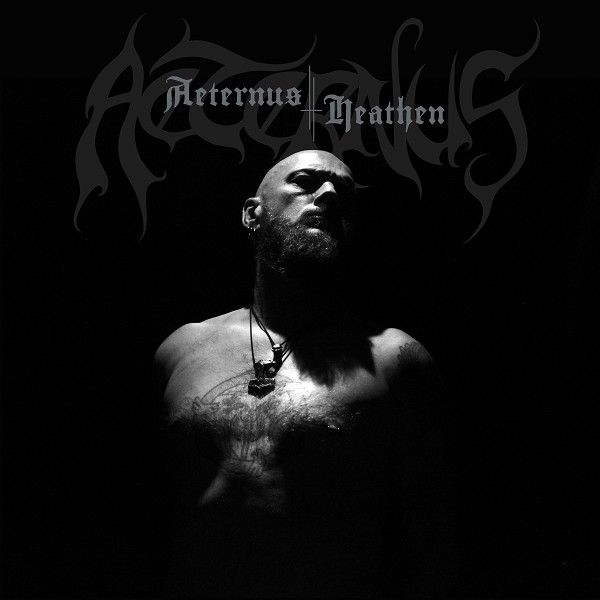 The album slowly begins with Hedning and its charming introduction. Unhealthy riffs join themselves to the composition, but without distorting this bewitching progression that the norwegians created. Ares’ powerful voice leads the way while musicians hold a solid rhythmic, that becomes more and more heady with the time. More direct, The Sword Of Retribution plays between airy harmonics and incisive riffs, but with some kind of haunting slowness in musical composition that traps the listener into the band’s universe. The trend will be reversed a bit with Conjuring Of The Gentiles and its more impactful drums, even if guitars are still spacy. Both universes are still connected by the singer’s screams, that turn into as soft as dark but quieter vocals for the final part with a surprising, but far from incoherent clean sound.
Aeternus comes back on a more violent sound with The Signifiance Of Iblis and its relentless riffs that switch from a steam roller to more developed harmonics before coming back on fastness. Quickly, the composition gives way to the dark How Opaque The Disguise Of The Adversary. There’s some Old School sounds in this amazing mix where every instrument has its place, but it’s easy to feel that the band’s spirit is still untouched. The fact is the same for the powerful Boudica, which is separated into two distinct parts as different than coherent between themselves. The very mystical middle break only highlights the feeling of communion with the band, just like ‘Illa Mayyit, the last track. The riffs tend to accelerate a bit on occasion, but Black Metal harmonics melt to a nearly muffled and unholy atmosphere for an esoteric final part.

With Heathen, Aeternus achieved to create a climate that ingeniously melts a frightening and dark ambience to ripping and powerful riffs, that never forgets to include those mystical tones. Admittedly, it’s not the norwegians’ first attempt, but their recognizable sound is still very efficient. The band were quite discrete since some times, but trust that they can be more active now.