The year 2018 is over, but the land of the Rising Sun still have treasures to offer us, as World End Man’s first full-length.

Created in 2014 by Yoichi Kohara (bass) and Shigeki « Umebo » Nakazato (drums), they are joined by Kiyo “No-kon” Nishihara (vocals, ex-Eardrum, ex-Stages Of Decomposition, ex-Kyojin Daigyakusatsu) and Yosuke Nakamiya (guitar, ex-Eardrum) the following year. The band release their first EP the same year, but Yosuke leaves the band. It will take until 2017 for Kosuke Hashida (guitar, Nihilist Workshop, The Cauterized) and Naoto Inui (guitar) to join the band, and the second EP is released, but it’s a bit after Kosuke’s departure in 2018 that the japaneses release Use My Knife, their first album, following a european tour.  Do you need violence? They will provide you some. 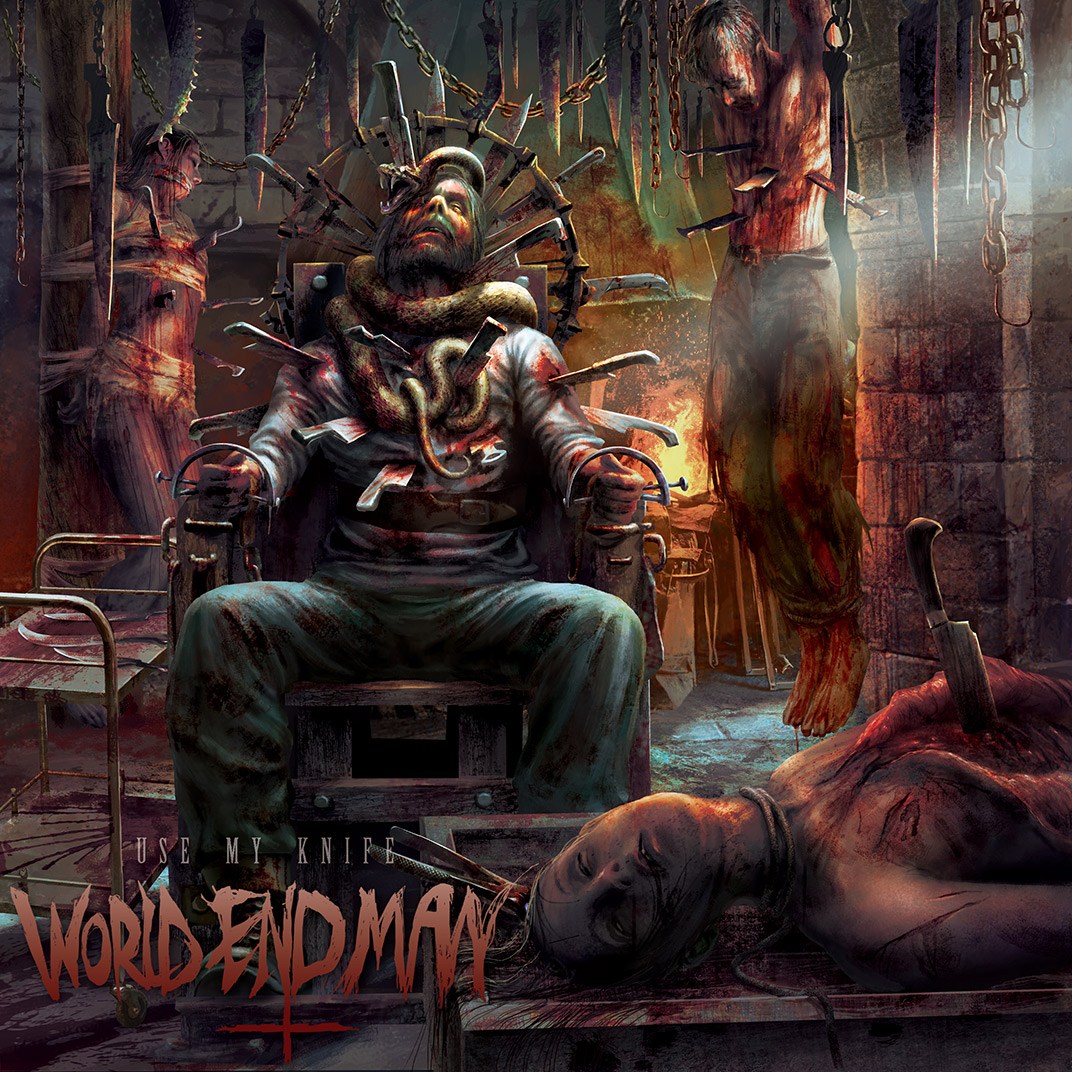 Let’s say goodbye to smoothness with Use My Knife, a fast song based on Brutal/Slam Death since the very firsts seconds, with a furious blast and heavy riffs. As powerful, the singer adapts his vocals to the rhythmic while keeping this hollow sound aspect, and I didn’t even need thirty seconds to headbang with my headphones on. After some breaks, we switch to Silence The Neighbor, with a gory videoclip that only the most brave enough will watch until the end. Riffs alternate between fastness, technicity and groove while vocals easily go from growl to pig squeal. Cold Injection takes over, with some Punk roots that can be felt under dancing riffs and meaningless violence while the band heavily pass out punches. The japaneses temper a bit with the introductive sample of Colombian Necktie, but quickly those hectic and killer harmonics-filled riffs resurfaces, then explode thanks to an amazing blast beat.
No rest will be allowed with Orifice Defilment’s beginning and it is easy to feel that the band is thirsty for destruction with those bomb-like riffs. While we think that the storm is over, it comes back more intensively. If you didn’t start stamping your feet or headbanging, just wait for Feeding The Negative, a song that was already on the band’s second EP. Way faster than the previous ones, this track also includes dissonant harmonics, a more groovy part, and shrilling lead guitar while there are Old School basis and Hardcore-influenced drums on Blackest End, a track from the band’s first EP. Way more harmonics, wrath and a different sound compared to the whole album that shows the band’s evolution. Last song, King Dissection was already revealed in 2017 and is a track that orients its composition towards Old School basis, but with this outstanding mix and this modern heaviness that the japaneses exploit all along the full-length.

Eager to show the world their motivation, World End Man sign with Use My Knife an excellent first album that should spread like wildfire. Genuinely melting additional influences to create their own sound, they clearly are a rising band. But we want more! About live shows, you can go with your eyes closed, it’s freaking insane!