Deeper down through Finland’s darkness, Kaamos Warriors rised in 2018. 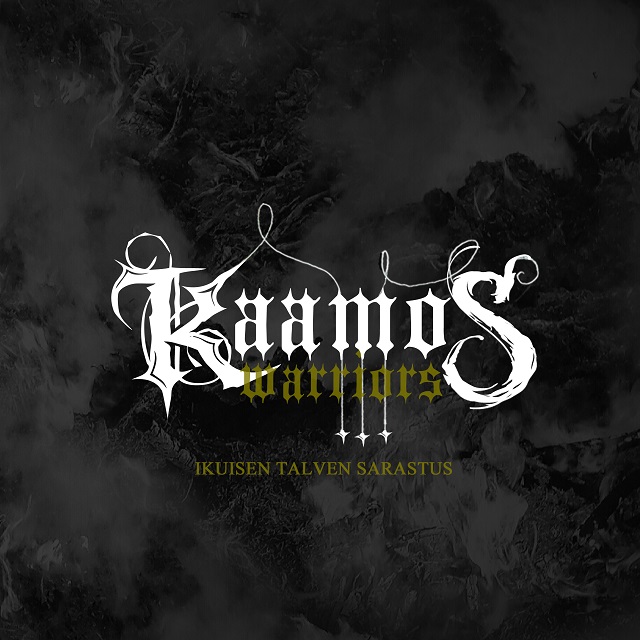 The album begins with Kaamos Warrior’s dissonant riffs, quickly joined by an icy-sounding and massive drums. Mikko’s vocals are raw and dry, perfectly geared for the Finn’s melodies, topped by some atmospheric keyboards. After a solo, Jani’s acoustic guitar completes this work before giving way to Talventuoja, a track with a faster beginning, but as cold and melodic as the previous one. Once again, those keyboard layers come to increase intensity, and the song ends with an acoustic guitar. It was a fast one, which quickly leaves for Winter Eternal, already unveiled by the band weeks ago, and which is the perfect embodiment of their concept : shrilling but harmonious riffs on lead guitar on a double kick flood and distant vocals that could just be out of the fog. Same observation for Aaveet, un track with more forceful and massive drums that makes us want to shake our head in rhythm with the finns. Harmonics they develop last until a heady solo that announces the end of the track, after an acoustic moment with a ghostly keyboard.
Starting quietly, there’s a pending violence on Immortals, and drums finally reveals its true nature. Vocals that come to us are really mesmerising, and this side of the sound continues with acoustic guitar. Yet quite long, this track pass in a blur so its atmosphere is absorbing, while Tyhjyys is way more direct. Riffs are sharp and let whoever listen to them a bloodthirst. Rhythmic suddenly stops while I was sure that it would resume, but Secret Of Stars, a track with dissonant harmonics and furious drums takes over. The celestial theme takes its full dimension when we head the incisive lead guitar that sometimes comes. The last song, Ikuisen Talven Sarastus goes back to dissonant tones and is one of those tracks that makes me want to walking along in the heart of nature without a goal. Riffs are as distant and impressive as on the beginning, but the band’s universe surrounds un permanently.

Even though to short, Ikuisen Talven Sarastus is is a promising album for the finnish band. Kaamos Warriors has Death Metal influences as well as Black Metal roots and melt them together on an icy atmospheric way and therefore impose a fascinating style that they call Nordic Dark Metal. I’m already excited for the next one!