If you’re tired of musical divide, my advice if to check Necronomidol’s sound.

Founded in 2014 in Japan, the project was created with eight female singers, but only Risaki Kakizaki is still in the band. But she’s far from being alone, and the band also depends of Rei Imaizumi, Himari Tsukishiro, Michelle and Kunogi Kenbishi. Helped by producer Ricky Wilson, the five girls record Scions of the Blasted Heath, their second EP, that follows three full-length albums. Are you ready to lose your bearings? 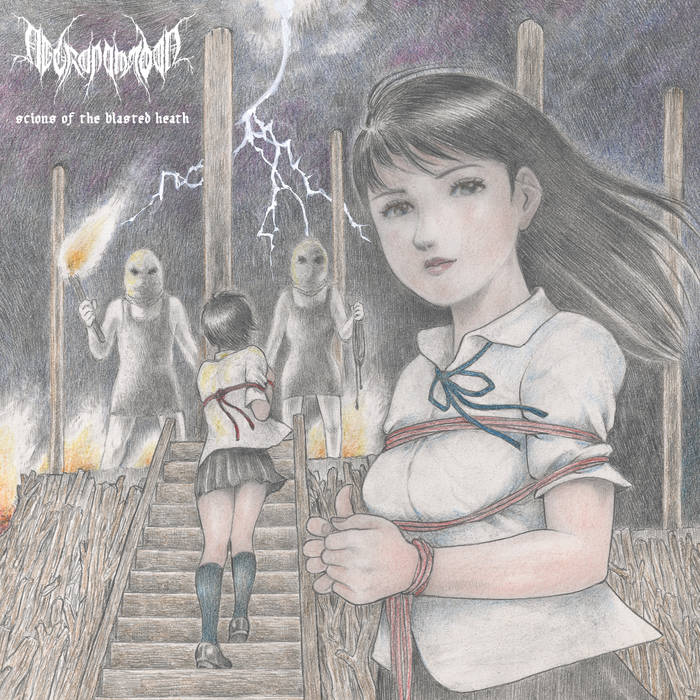 We start on a familiar ground with the first song, Salem’s Black Metal rhythmic. But this flood of dark sounds will be joined by the young ladies’ voices, that strongly decides with those atmospheric riffs. And whether we recognize that the instrumental part scrupulously follows this mesmerizing Post-Black Metal dynamic, vocals that made the band’s touch, seems also a bit melancholic. Complete shift of universe with Phantasmagoria Cosmos and a catchy Electro/Darkwave sound. Idols’ vocals perfectly fit to the instrumental and we easily imagine a japanese anime’s ending theme for the visual aspect. However the bass differs a bit due to keeping the same tone than on the previous track, and the band also includes a guitar solo, with Heavy Metal tones.
While I talk about Heavy Metal, it’s on this style that The Festival was composed, but also keeping this motivating aspect in both riffs and the singers’ voice. Children Of The Night comes back on epic sounds with among other things keyboards that melt modernity and knighthood atmosphere, while the girls play with their voice, that gives a surprising outcome but… it’s far from uninteresting! Last track of this EP, Lament Configuration mixes guitar and Electro sounding keyboards in its rhythmic parts, and even if it’s mainly joyful, impossible to not feeling the dark side of the music. After some harmonics, the track ends on a dismal bell ring.

I completely concede that Scions of the Blasted Heath is an unusual experience. Melting influences as diversified than apart from the others, Necronomidol is a band whose compositions are heavily loved or not at all, but you cannot say that they’re not original! Although a bit hard to access on the very first time, the band had absolutely no musical boundaries.

One thought on “Review 165 : Necronomidol – Scions of the Blasted Heath – English”