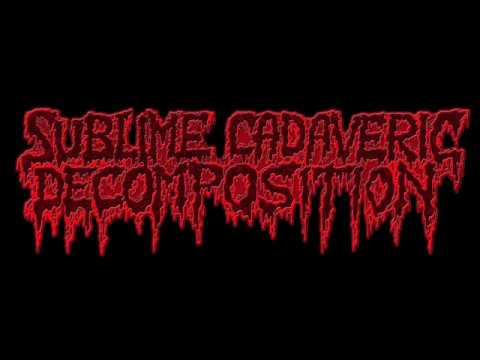 If you’re looking for violence, so put your trust into Sublime Cadaveric Decomposition to bring you some.

Since 1996, the Paris based band delivers punches in the face at will, and Raping Angels In Hell, their fifth full-length, won’t change anything to their program! Lead with an iron fist by Seb (vocals) since the early days, he is now gathered by Dagulard (drums) and Guillaume (guitare) after some changes through years. Ready? We don’t care, it starts anyway. Notice that Kevin Foley (ex-Benighted, ex-Abbath, ex-Mumakil…) recorded drums!

Since the very first second, the french strongly attack with a really fast Sabbath Night (The Impure Reptile). A true double kick steamroller comes to support guttural screamings and as sharp as effective riffs. The band doesn’t lose their rage, and even if The Day They Dissect Me calms a bit the tempo down for an Old School Death Metal oriented introduction, the main riff will lacerate you thanks to nice harmonics. We keep this Grindcore basis and energetic blast beat, even if the band takes some liberties on Groovy parts. The next track isn’t a cute one too, and after some seconds only, Apostate Angels (Ritual and Taboo) literally falls upon us thanks to huge Death Metal riffs. Mixing honors each instrument and screams, from pig squeal to visceral howls. Grumbling Hive follows the same pattern, with a fiercer tempo, and the band keep their usual violence in mind.
Some  dissonant harmonics introduce Medico Legal Psalmody, a quite unhealthy track that even keeps this atmosphere during a super fast blast beat, while Spark Of Being only focuses on a massive and effective sound. However, both tracks perfectly fits to the band’s universe! After this short composition comes Maggots Feed on Carrion, a song of which introduction will let the style lovers guess what will come next: the storm is near. As implicitly promised, the unfurling wave blows us apart in this pure tradition of blast beat and lumbering riffs. You want more? Ruddy Sleep (The Remains) comes back with disturbing harmonics and heavy rhythmic to seduce an audience that will only want one thing: throw themselves into the pit.
But the band didn’t say their last word yet, because we immediately continue with The Spoils of the Battle, an intense track since the very beginning that won’t goes slow. As a true human machine gun, the drummer sprays us with continuous hits while the other members easily keep pace before The Torture Chamber. Whether the ambience is darker on the introduction, the machine starts again with this violence pattern that we enjoy so much with Sublime Cadaveric Decomposition for a short lesson of power during nearly four minutes. Without getting out of breath, the album continues with Under The Caterpillar Tracks that doesn’t change the recipe used since the beginning with a warlike and catchy rhythmic, while Raping Angels In Hell, the eponymous track, is a bit different. Longer than the other compositions (more than six minutes), it creates a true worrying ambience that perfectly sticks to the strength developped by the musicians without tainting this dark atmosphere.

Sublime Cadaveric Decomposition changed a lot since twenty years, and whether their leitmotiv will remain violence, the band allows itself to innovate with Raping Angels In Hell. Alternating between massive parts and some mysterious harmonics, tracks perfectly follow on. On stage, it’s an unstoppable bulldozer!