Created in 2014 in Switzerland by Emanuel Strebel (also guitarist and singer for Morijah), he takes care of writing, composing and recording everything for Horeb, his first album. The mastermind took three years to compose those nine dark-sounding Death Metal tracks with gloomy topics like suicide or biblical characters. Are you curious? So do I. 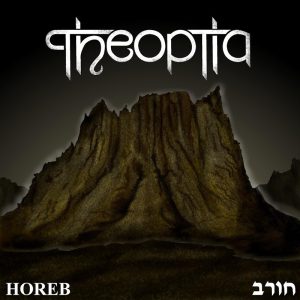 Since the first notes, we feel that Theoptia’s Death Metal isn’t ordinary. Technical and Progressive influences interact with stunning ambiences on Desert and Get Up, before meeting a more massive rhythm part. The musician’s growls give more strength to a diversified blend. We will also notice some slower, heavier and dissonant parts on Forty, a track that includes Post-Metal elements to come back on massive riffs. Groovy moments are also on this catchy song, with also piercing leads. After a quiet and ambient break, the rhythm part comes back before dropping us on The Only Survivor. Once again, the track is composed of various styles’ elements for an interesting diversity, with a great intensity.
Silence breaks the pattern of violence with a soft-sounding and slow song, but we fastly go back to furious riffs after Storm’s introductive sample. The rhythm part is heavy, screams have an Old School sounding, but modern keyboards come to create a contrast on this impression. The final part is also very different from the whole track, but allows the band to do a real break before Quake, another devastating song. Probably the heavier of the whole album, and that challenges the musician’s skills with a convoluted blend of sounds. Fire is an oppressive and darker track, but it still stays on a massive and effective rhythm part to support lead guitar, while the last song, A Gentle Whisper, concludes this album with a soaring and mystic touch. A mesmerizing guitar that carries us until a sample hypnotize us one last time.

Even if it is focusing on a Technical/Progressive Death Metal, Horeb isn’t an album like the others. It allows Theoptia to place the foundation stone of its history, and to define its own style that melts severals and complementary influences/ Sometimes surprising, sometimes catchy, the sounds transports you.